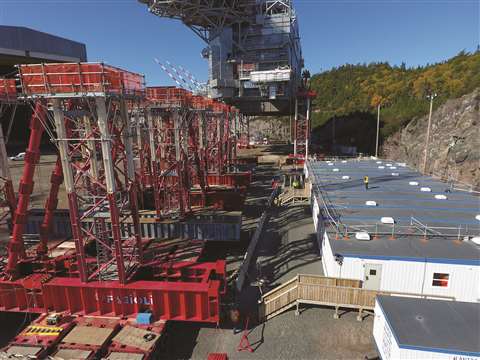 Fagioli successfully transported and installed a 4,500-ton Living Quarter (LQ) module onto an offshore platform. The module measured 190 feet by 65 feet by 100 feet.

The project was broken into phases: the transport of the LQ module from the construction hall to the completion area; completion of the construction of the LQ by assembling the Helideck, safety boat stations and other equipment; jacking up the completely assembled LQ and inserting SPMT with towers and grillage; the load out of the LQ module to the barge; transporting the barge around the finger pier; and finally hanging the LQ to the topside.

Operations were executed on a 24-7 basis with a double shift team from June to October 2016. This included 1,600 engineering hours and 2,800 operational man hours.

Much of the transport and installation tasks grew in difficulty as the operation had to be performed at open sea.

Fagioli deployed 230 axle lines and 10 PPUs from its own fleet, together with transport beams, support towers, grillage beams, Ro-Ro ramps and a mooring system. For the marine transport Fagioli used a 460 by 140 by 28-foot deck barge with integrated ballast system and two 55-ton bollard pull tugboats.

After its completion, the LQ was jacked up using Fagioli strand jack towers and the SPMTs inserted with 60-foot tall grillage beams and towers. The center of gravity of the load at that point was more than 100 feet above ground level.

A multi-point, 100-percent-redundant mooring system consisting of eight by 30-ton winches equipped with loading cells was used during the load out on the barge, which was planned to be independent from the tidal cycle. Upon completion of the loading, the grillage beams had been lowered onto grillage support stands and spreaders, and secured.

A large part of the engineering work was the assessment of the barge stability and weather-induced motions during the marine transportation around the topside that was sitting on a finger pier.

The Transport Convoy Planarity, the barge draft, real-time trim and heel and LQ verticality and alignment were constantly monitored by Total Station Survey instruments with one-half inch precision, feeding laptops with GeoMOS software as well as tablets in use to the engineers controlling the operation.

The actual LQ was built on site in a dedicated yard area by the client. Fagioli then weighed the LQ module by means of a dedicated weighing system composed of load cells. The module was transported using SPMTs from its build location and set on support stools to allow the Life Boat Stations and Helideck modules to be installed.

The barge carrying the LQ module was kept in position by a spacer barge interposed between the finger pier. Upon removal of one side of the grillage, the LQ was moved against the topside by the SPMTs, with the barge ballast system used to keep her keel always even.

The SPMTs aligned and centered the two large pad-eyes on the LQ with the pins on the topside, while the LQ lower side was aligned on the support base built on the topside. The survey instrumentation was once again very important to control and guide the operation.

The ballast system was finally used to lower the LQ into its final position and disengage the transport equipment.

The LQ installation onto the topside was on the critical path of the overall project. The very detailed planning and design did allow the execution of SIMOPS (simultaneous operations) by other parties working to complete other parts of the topside. The LQ module will provide accommodations for 220 people offshore.