From June to September 2017, Fagioli was involved in a challenging operation in Romania for the lifting, skidding and jacking down operations of a 182.4-ton Top Ram Guide (TRG) at Costanza – by means of elevator system – for their client, Saipem. 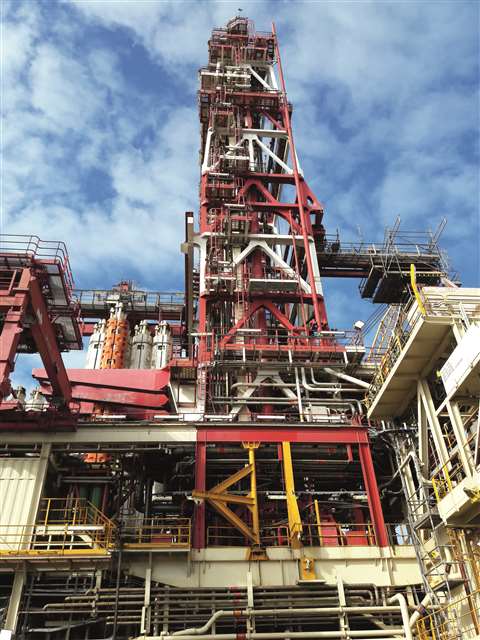 Such a job might seem impressive, but perhaps not mind-blowing, until one considers the Top Ram Guide’s dimensions: 24 meters long, 7 meters wide, 18 meters tall and again, over 182 tons.

Due to head-turning scope and scale, the precision job left no room for error, comprising the transfer of the TRG from a storage position to a drilling tower on top of the Scarabeo 9 offshore ship – a last-generation, ultra-deepwater semisubmersible unit equipped with a dual RamRig and a Dynamic Positioning (DP3) system, and designed to operate in water up to 12,000 feet and drill up to 50,000 feet below the rotary table.

The main project procedures included Fagioli lifting the TRG by means of elevator system onto Fagioli Storage Towers; skidding it onto the Fagioli Elevator System; transferring the load from hydraulic jacks to the skidding rollers; and jacking down the TRG with eight hydraulic jacks.

Such a job might seem impressive, but perhaps not mind-blowing, until one considers the TRG’s dimensions: 24 meters in length, 7 meters wide, 18 meters tall and again, over 182 tons.

The equipment used to get this job done was as striking as the job itself: four towers with base frames welded to the raised deck (up to 46 meters height); one elevator frame composed by two longitudinal girders and two transversal bracings; eight strand jacks (L-50) for the elevator system; four strand jacks (L-15) for skidding; eight hydraulic jacks (50-ton capacity – each one 150 mm max stroke) for jacking down operations; and four rollers (200-ton capacity each) for skidding operations.

“After the erection of the skidding system, and the sea fastening of the Top Ram Guide was removed, we started the operation,” explained Edoardo Ascione, president and managing director at Fagioli Inc. “We installed the tirforts and started to take the load with strand jacks (L-50). Each stroke was about four hundred millimeters, with a continuous check of eventual oscillations by the item and the elevator system.”

Ascione added that the load was gradually increased from the hydraulic jacks in increments of 20 percent. 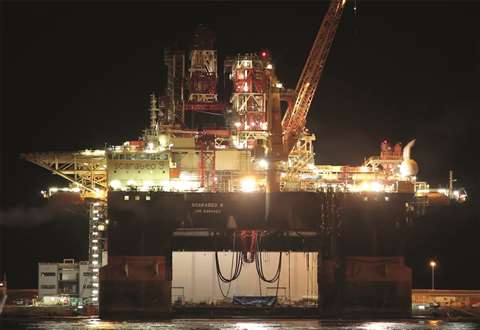 Operators then connected and tightened four 5-ton turnbuckles from the elevator girder to the cantilever beam, and installed two bridge elements. Eight stoppers were removed from the skidding rails. Then, the skidding operation was executed, adjusting the stroke as needed to keep the skid tracks at the same elevation.

Eight 50-ton capacity hydraulic jacks were then positioned under the TRG frame beam – with proper shimming underneath the jacks in order to have a free gap of approximately 10 mm between the jacks and the TRG frame.

The jacks were raised until in contact with the top frame beam of the module. Once the full load was reached on the jacks, the n°L15 FAH from the TRG were disconnected and the eight jacks were raised.

The TRG was lifted and the rollers from the Ram Guide top frame were removed. The Ram Guide was lowered until connection plates were in contact with the rest of the structure.