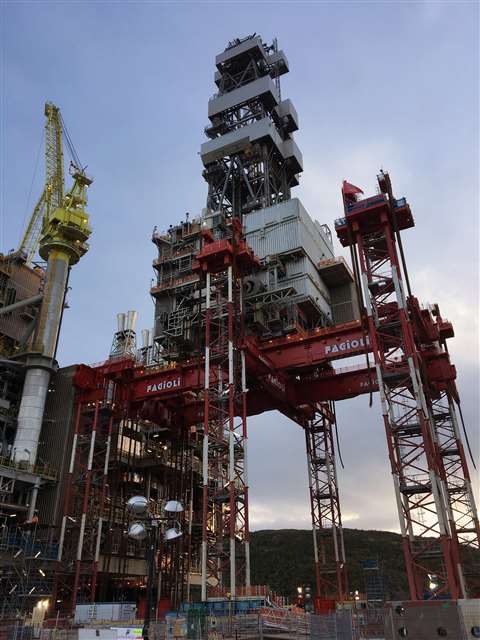 Fagioli recently completed marine transport and installation operations for one of the most impressive oil and gas projects ever undertaken in the offshore industry.

“The installation scope covered the delivery of all modules to the assembly yard in Canada and their assembly into one topsides unit on a customized pier,” said Edoardo Ascione, president, Fagioli USA.

Fagioli was also subcontracted to weigh the larger modules for the project, including the Utility Process Module, the Living Quarters Module and the Drilling Support Module.

The project activity started in the fourth quarter of 2012 with the engineering phase taking place through the end of 2013. This was successfully completed before the beginning of site operations which took place from early 2014 to October 2016.

To the Canada job site the Fagioli team mobilized 240 SPMT axle lines; strand jacks with a capacity up to 606 tons; a tower lift system for the lifting activity; crawler cranes with up to 1,488-tons of capacity; an elevator system with a 7,736-ton capacity; 64 skid shoes with capacities up to 1,102 tons each for the skidding load out and load in activity; and climbing jacks. All of this equipment was used in a variety of creative ways to lift and install the various sections.

“Following the delivery of all modules to the assembly yard in Canada, Fagioli was called to prepare and perform one of the biggest load out operations ever performed in the  history of the offshore industry, executed after years of planning and engineering calculation and simulation activity,” said Ascione.

This included the skidding operation of a 48,501.6-ton offshore Utility Process Module by means of 64 skid shoes on a semi-submersible ship in Korea.

Following delivery by another contractor of the Utility Process Module to the assembly yard, Fagioli executed the load in operation onto the assembly pier.

Fagioli used strand jacks and towers to raise the Drilling Support Module to the height of 19 feet for positioning of the module onto the elevator system which would raise the module to a height of 118 feet, ready for skidding onto the Utility Process Module.  The Drilling Support Module was skidded onto the Utility Process Module in one direction and then transversally skidded and jacked down using climbing jacks onto its final position within extremely tight tolerances.

The Drilling Equipment Set – a 229.5-foot-tall, 12,139-pound drilling rig tower – was moved on site by a transport vessel onsite and loaded in by SPMTs. This very heavy module was then lifted onto the transport stools for final positioning onto the skidding system. The Drilling Equipment Set was lifted by the strand jack and tower lift system up to the planned height for the skidding operation. The skid shoes system allowed the final completion of the skidding operation onto the Utility Process Module. Final installations were the Flare Boom and the East Life Boat Station.  Fagioli’s scope of work ended in October 2016.

“This project was one of the most challenging and complex operations ever performed by Fagioli,” Ascione said. “The project represented one of the largest fleets of equipment used so far for the assembly of an offshore platform.”

One hundred percent of Fagioli coverage was required for all operations, including double shifts for the main installation.  At the peak, Fagioli had 225 workers on site. The engineering department was involved in the project since 2012 for concept development and calculation studies, including simulations.