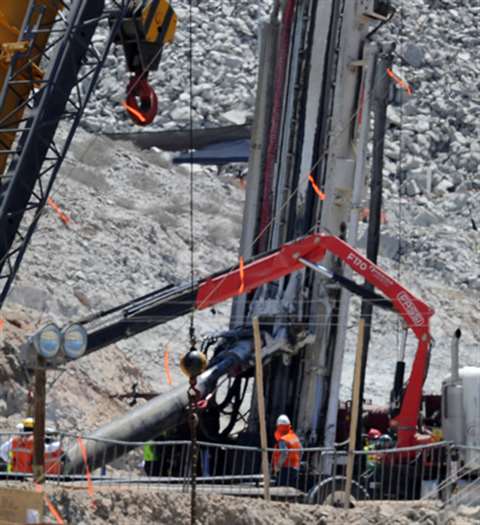 Cranes from Italy-based crane manufacturer Fassi Gru played a key role in the rescue of 33 miners trapped for nearly 10 weeks in Copiapo, Chile

Equipment from Italy-based crane manufacturer Fassi Gru played a key role in the rescue of 33 miners trapped for nearly 10 weeks in Copiapo, Chile.

Fassi cranes lifted and placed steel pipes that formed the escape tunnel, which was part of one of the most complex rescue operations in mining history.

Following weeks of drilling and other preparatory work, removal of the 33 miners, via a narrow bored hole from 700 m underground, began Tuesday 12 October and finished Thursday 14th.

US-Chilean drilling company Geotec Boyles Bros. S.A. supplied the F170A Fassi cranes, which had a special configuration to help the operator maintain tighter control of fine movements in critical conditions and to allow the crane to be used for longer.

"Everyone involved on site is working against time to bring the mining crew to the surface safely," said Fassi spokesman Silvio Chiapusso. "We're pleased that Fassi equipment is contributing to this effort."

Fassi Gru, through its local dealer Fassi Chile S.A., has been in Chile for more than 15 years.