A twin-engine jet fighter, the Gloster Meteor was a British Royal Air Force aircraft with an historic distinction. During World War II it was the Allies only jet aircraft to perform combat operations. With its turbojet engines, it was developed by Sir Frank Whittle and his company Power Jets Limited based in Lutterworth, England. 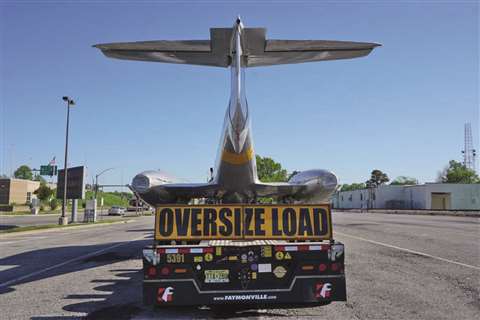 Close to 4,000 of these jets were built, and they served air forces around the world. The Meteor saw action in World War II, the Korean War and other conflicts for a couple of decades. Later, specialized variations of the aircraft were used in aerial reconnaissance and as night fighters. The plane was also used for research and development purposes and broke several aviation records, including airspeed records of 606 miles per hour in 1944 and 616 miles per hour in 1945.

By the 1950s the Gloster Meteor was pretty much obsolete, with many preserved in history museum exhibits. According to Wikipedia, only a handful of these jets are in active service today. But one of these old warbirds recently made its way to the United States.

Last year the World Heritage Air Museum in Detroit, MI acquired one of these aircraft, the Gloster Meteor T7, from the Classic Air Force Trust in Coventry England. 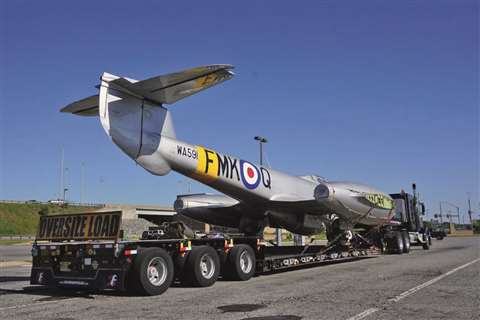 The British Gloster Meteor saw duty during WW II as the only jet aircraft to perform combat operations for the Allies.

It took more than a year to get the airplane to the U.S., but she arrived in Norfolk, VA in late April after an ocean voyage from Liverpool, England, according to an article on the website of warbirdnews.com.

At that point DeMase Trucking and Rigging was called on to haul the partially dissembled aircraft to the Hampton Roads Executive Airport where the airplane was reassembled for flight.

Using a 3-axle double drop trailer from Faymonville, the plane was 22 feet wide without the wings. The steerable MegaMAX stretch double drop, with a drive height of only 13 feet 8 inches, is the lowest stretch in the market and was ideal for clearing low bridges along the route. The unique king-pin steering on these trailers offers maneuverability and allowed access to extremely tight areas, according to Faymonville.

Faymonville is the only European manufacturer in the North American market that uses electric and pneumatic components that are completely DOT approved. For an extra-long life-cycle, the MegaMAX chassis is fully metalized (zinc-plated), which ensures the best corrosion protection available in the market.

WarbirdsNews.com reported that the aircraft was reassembled and deemed flight worthy on June 9, 2018. Nine days later the plane flew to North Carolina for a short stay and then was set to make its way to its new home at the World Heritage Air Museum in Detroit.

“WA591 is scheduled to attend EAA AirVenture Oshkosh 2018 this July, alongside two of her contemporary British stablemates from the World Heritage Air Museum, the deHavilland Venom FB.54 (N747J, ex-Swiss AF J-1747) and the Vampire T.55 (N115DH, ex-Swiss AF U-1206), where the trio will help celebrate the Royal Air Force Centenary,” said WarBirds.com. “We look forwards to seeing the Meteor on the air show circuit for many years to come, and congratulate her owner, Marty Tibbitts and his World Heritage Air Museum, for their foresight in bringing this rare treat to American skies.”

Based in Lyndhurst, NJ, DeMase Trucking and Rigging is a family owned company started in 1973 with one tractor trailer and a customer in the metals industry. Today the company provides specialized transportation, lifting, rigging and warehousing throughout the Northeastern United States.