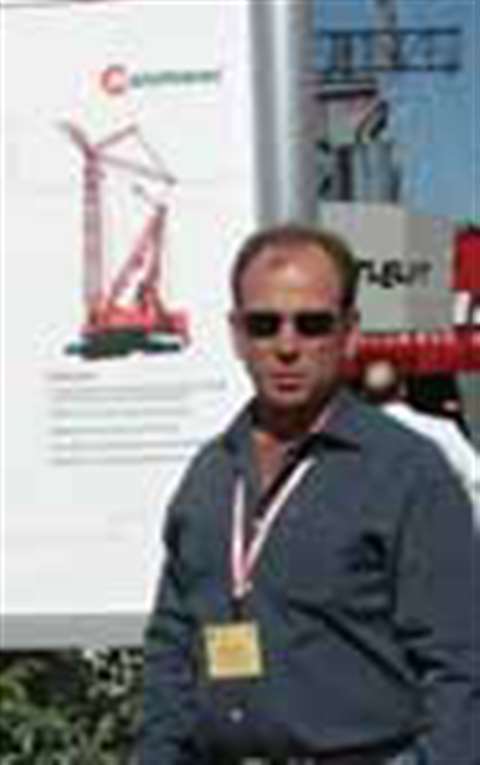 Bob Shirey at the Manitowoc stand at ConExpo last month

Manitowoc unveiled the plans for the new crane on March 11 at ConExpo in Las Vegas. The crane will be the largest Manitowoc has ever designed or built, and employs a lift-enhancing mechanism that eliminates the need for a counterweight wagon. This new concept, called the VPC (the Variable Position Counterweight) never touches the ground and extends or retracts as needed by the crane's lift.

Bob Shirey, president of Bulldog Erectors, said the decision to add Manitowoc's newest crane to his fleet was a natural step in his company's growth. Bulldog Erectors began as a steel erector, but now leases cranes and lifting services to customers across North America. “The 31000 takes us to a part of the business we haven't been before,” Shirey said. “We see a significant demand for heavy-lift projects, including, energy, petro-chemical, nuclear and major infrastructure work.”

The Model 31000 crane was sold by Shawmut Equipment of Manchester, CT. Bruce Buchan, Manitowoc vice president sales, Americas, said the 31000 is a great fit for Bulldog Erectors and its growing crane-leasing business. “We commend Bulldog Erectors for having the vision to step up into the ultra heavy-lift sector of the industry. It's obvious they understand customers are requiring bigger, more sophisticated cranes to meet future lifting needs,” Buchan said. “Manitowoc is excited to partner with Bulldog in bringing this new crane to the North American market.”