Steel Giraffe, based in Portsmouth, RI, is the first customer to purchase a new 2019 Demag AC45 City in the United States. The new 50-ton city crane was purchased from the Empire Crane New England branch. 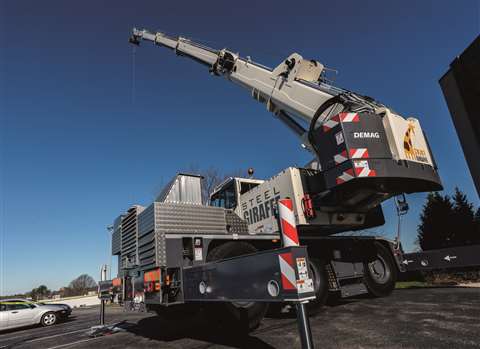 According Empire Crane General Manager Justin Melvin, the AC45 City is the most compact crane in its class. With three axles weighing under 71,000 pounds, the crane is extremely mobile and does not require additional permits to be road legal, he said.

“I was looking for a really nimble crane that you can both drive down the road and operate from the same cab,” said Stephen Kelly, owner, Steel Giraffe.

Steel Giraffe is a boutique crane company. The company’s jobs include lifting high-end masts into yachts, moving grand pianos through windows, setting statues and the like. Most of jobs are hourly or half day. The AC45 City is the perfect crane for this type of work, Kelly said. 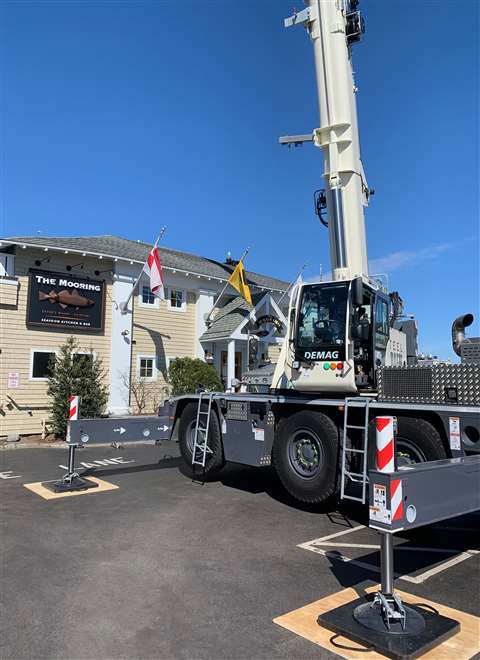 The crane is 28 feet 6-inches long and 8 feet 4 inches wide. The maximum system length is 145 feet. It features an Allison transmission, a Mercedes Tier 4F MTU 6R1000 engine and a central lubrication system. The crane has several cameras for added safety.

The base boom section of the fully hydraulic main boom contributes to the compactness of the crane. At 10 feet 4 inches tall it keeps a very low clearance while still being able to work at steep angles. This is particularly useful when working indoors, Kelly said.

Reduced transportation costs were also a factor in Kelly’s decision to purchase the AC45 City. Because Steel Giraffe does mostly short jobs, the roadability of the crane is key, he said.

One of the crane’s first jobs was a contract job for the Rhode Island Department of Environmental Management (DEM). The project involved hauling and launching 40 foot by 8 foot by 20 foot floating docks throughout Rhode Island. The docks weigh 3,000 pounds, and with the chart capabilities in the AC45 City, they were able to set the crane in one spot and quickly make the lifts.

“We could launch all of the docks into the water without moving and re-setting the crane,” Kelly said. “We were able to be at three different launch sites per day. The AC45 City being able to drive down the road on its own is saving me a ton of money right off the bat.”

Another job Steel Giraffe completed with the AC45 City was at The Mooring Seafood Kitchen & Bar in Sayers Warf in downtown Newport, RI. Steel Giraffe was hired to move 12 pieces of a steel awning frame, weighing 1,000 pounds each. The crane was rigged with a full boom and jib with a 30-degree offset for a total reach of 145 feet. It picked out over the restaurant at a 110-foot radius.

“Nobody could believe that such a tiny crane had all of that boom out,” Kelly said, “It has a really good chart and was handling the picks very easily.”

Steel Giraffe’s crew was able to set up the crane in the parking lot and still have plenty of room for diners to park and safely enter the restaurant.

“The AC45 City has increased our production in just these jobs alone,” Kelly said.

“We see how successful the AC45 City has proven to be for Steel Giraffe, and we look forward to seeing our other customers experience the same productivity and savings with this new Demag model,” said Melvin.

Kelly is most impressed with the crane’s productivity and ease of use.

“We’re not a big crane company, and with me, I need the Swiss-Army knife of cranes,” Kelly said.