From cop to crane owner 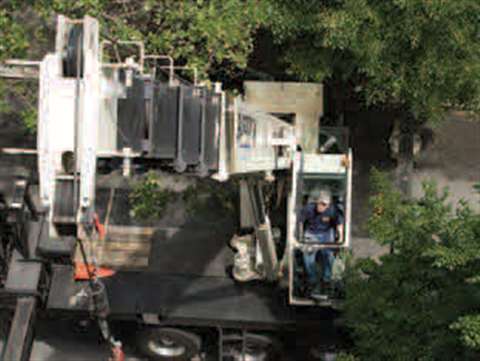 After a 13-month tour of duty in Vietnam, Mike Schwantner Sr. did what many had done before him and continued to serve his country by joining the police force. A nineyear career followed, the bulk spent working undercover, until Schwantner retired from the force in 1982 and founded Astro Rigging. Schwantner decided to focus on installing air conditioning and refrigeration units with boom trucks, across the five boroughs of New York City. He had previous contracting experience in this area from working a second job while still a policeman. With his business partner at the time, he saw an opportunity in the boom truck business and went for it. His previous career provided a good handle on the rules and regulations that govern lifting operations in NYC, for example, all cranes operating in the city have to be New York City certifi ed to give an extra margin of safety. Astro runs National telescopic boom trucks supplied by Mike Johnson from Garden State Engine & Equipment based in nearby New Jersey. Success has come from Schwantner's strict Marine Corps and NYPD approach to lifting operations. He runs a tight ship. Just him and son, Mike Schwantner, Jr., plus three other people, form the backbone of Astro Rigging. “We want to keep the company small enough so it's one-on-one with customers,” says Mike Jr., who has been working full time with his father for the last seven years. “We feel it's important that customers deal with an owner when they call.” Mike Jr. can be found on site most days while his father takes calls, bids jobs and runs the company from the Astro offi ce in new Hyde Park, Long Island. In praise of his boom trucks, Mike Sr. says, “Fast set-up times are what make these cranes so good. Set-up is so quick compared to other machines where you have to swing equipment like the jib onto the boom.” The Schwantners are big on running the latest equipment. Astro purchased its 40 ton National 18142 three years ago and recently took delivery of a 33 ton model 14127 H, which has a maximum tip height of 167 feet and a 127 foot maximum boom extension. The 18142 has a 142 foot five-section telescopic boom, which gives a maximum tip height of 176 feet. “Five or six years of ownership are good numbers for us before we turn a machine,” says Mike Sr. “We want our customers to see we are working with the latest cranes.” The bulk of Astro's work, around 90%, is for refrigeration and air conditioning contractors, while the balance is for telecommunications contractors. Weighing an average of 2,500 pounds, the aircon and refrigeration units Astro picks and places are typically lifted in at a 60 foot radius and height of 100 feet (usually a five or six storey building). “We love the way the National cranes work,” says Mike Sr. “Everything about them spells quality. These cranes are rock solid.” Astro Rigging is run on strong principles that include showing up early and doing what was promised – values Mike Sr. learned from his time as a police officer. “Most riggers like a niche. Installing aircon and refrigeration units is ours. It's what we're good at. We rely on our reputation and can't aff ord to run equipment that might let us down.”