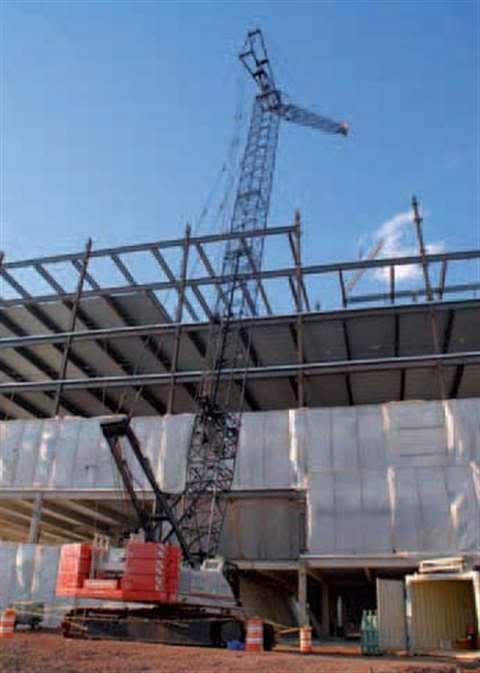 It is a well known fact that, in the construction industry, red iron, ice, snow and high winds (like water and oil) just does not mix. Historically, this has always been true, especially in the erection of structural steel on a nine or 10-story office building.

However, do not tell that to Joe Willis, erection foreman on a Northern Virginia project for Carolina Steel & Stone Co., especially on the coldest, most inhospitable 24-hour period of the winter.

The North Carolina-based contractor used a 150-ton capacity Link-Belt 238HYLAB5 in the lufler boom configuration for extended reach, with no site room to back up. The object was to erect hundreds of pieces of structural steel weighing thousands of pounds in a critical 60-day timeline. This time period was in the middle of winter, and despite the presence of snow, ice, high winds, and below zero temperatures, it has created a seven-day-a-week working condition.

The 435,000 square-foot Overlook Towers project is a multi-story office development in the rapidly expanding Washington, DC suburb of Herndon, VA. The area is experiencing unprecedented growth and expansion. The developer of record is F.F. Development L.P.

An ever increasing demand for construction speed has mandated changes in technologies, tactics, techniques and equipment. Project safety is now an overriding factor. This work, according to Willis, is a “100 percent tie off” project - no exceptions. The structures are still being bolted together one piece at a time by the men of the Red Iron profession. All but long gone is the traditional symbol of the iron worker - the long, slender spud wrench.

It is now used only in the initial phases of steel-erection bolting. Today's bolts are no longer hand tightened. This technique was replaced, first by the compressed air torque wrench and unwieldy red rubber hoses tied to air compressors, to now, the compact electric impact wrenches with selectable torque settings.

The bolts themselves have changed. Some of the newer ones have a ¾ inch long nub designed to snap off when the proper torque is reached. They come preassembled in order to save time and in many cases, the ground crews even pre-assemble them in the beam's bolt holes. This is greatly appreciated by the high iron guys working at wind/chill temperatures hovering around -15 degrees F.

Willis says they will erect the steel beams, columns and floor decking on the structure. When complete, the building will have a 10th level penthouse that will contain all the mechanical components, including heating and air-conditioning. Material and steel is coming to the site one-half a floor at a time because of space constraints.

“Increased job safety is a matter of all around education,” says Tim Davis, president of the Carolina Steel & Stone Co. “We endeavor to run all our jobs, from the smallest to the largest, with the same safety requirements. All our jobs are prosecuted today with 100 percent tie offs as mandatory. That way the men all know what we want and how we want it done. That way we increase the odds of everyone going home safely every night. There are no exceptions to working safely.”

Operator Robert Jackson says that his heaviest pick would have been an 8,000 pound main column. He also has lifted many times a 6,000 pound pick consisting of two 44 feet by 24 inch beams plus the required rigging. During this time the mast was set at 85° and the lufing jib was at 50°. The working radius was 115 feet from the machine's center pin. The farthest he has reached is 125 feet.

Davis and Andy Merrell, vice president, concur that their Link-Belt 238 in the lufler mode was the most practical way to go for the steel erection on this structure. Their reasoning was that it presented the crew with the ability to erect the building from a single location with only minimum movement, rather than having to move a crane around the building's perimeter.

By reaching clear across the building the crew was able to give the general contractor full floors days ahead of any other method. This facilitated the concrete floor pours and helped speed the construction.

Founded in 1997 in Charlotte, NC by Davis and Merrill, Carolina Steel & Stone's primary focus is structural steel erection with pre-cast concrete erection, including tilt walls, being secondary. They work principally in North Carolina, South Carolina, and Virginia. Their crews and cranes have also worked in Texas, Tennessee, Maryland, Georgia, and Illinois. Their largest projects include a $4 million contract to erect the structural steel on the $14 million expansion of South Carolina's MUSC Medical College.

The company has a heavy equipment fleet of more than 50, including 13 heavy lift cranes ranging in capacity from 70 to 200 tons, nine of which are Link-Belts. Dependability, reliability, commonality of parts and prompt dealer response and service are the factors they consider when buying a crane, says Merrell. “For the most part, whenever possible, we try to keep the same operator assigned to the same machine,” he says. “We do occasionally switch operators on the larger cranes but having similar cranes makes this easy. We also have a special crew of men assigned to erect, dismantle and transport our crane equipment from site to site. There may be an occasional exception to this but within a couple of hundred miles we do all of our own transport.”