Geared up, rigged out 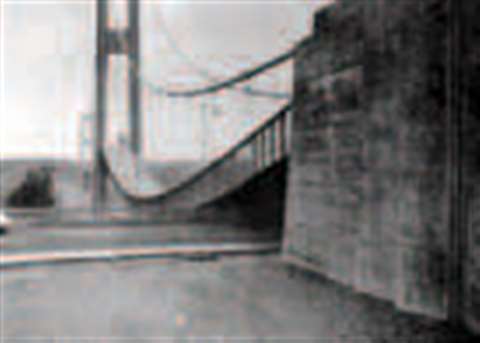 The first Tacoma Narrows Bridge collapsed in a windstorm four months after it opened. The bridge deck remains on the floor of the Puget Sound

Spanning the Tacoma Narrows waterway between Tacoma, WA and Gig Harbor, WA, the new Tacoma Narrows Bridge is a showcase for rigging gear use and application. The first suspension bridge to be built in the US in perhaps half a century, the building of the bridge has been a study in the application of new tools and technologies to a very old bridge design and architecture. The last time a suspension bridge was built in the US, much of the modern day rigging gear and equipment did not exist.

Tacoma Narrows Contractors, a joint venture of Bechtel Corp. and Kiewit Pacific Corp., is the contractor for the project. “Kiewit is handling much of the road construction leading up to the bridge on both sides,” says Bradley Sipress, field buyer for the project. “Bechtel is speciffically here for the bridge work. We are getting ready to lift the bridge deck, so we have needed a tremendous amount of many different types of rigging year.”

He estimated that the job has required hundreds of pieces of rigging equipment, ranging from small to large hoists, chain falls, A-frame gantries and more. “I think the biggest purchase was a 9 ton hoist,” he says. “From half ton hoists to 9 ton hoists, we are using hundreds of hoists.”

Three companies have been providing the rigging hardware, equipment and wire rope needed on the project, including Lifting Gear Hire, Washington Chain and West Coast Wire Rope and Rigging. Initially the contractor was buying all the gear needed but switched to renting when it became apparent just how much equipment they would need.

“This has been a very good project for us,“ says Scott Jones, of Lifting Gear Hire in Seattle. “At first they were buying [the equipment] from us but in the last two months it's been mostly rental. For a while, they almost wiped us out of everything. At one point we were getting four orders a week from them. It's been a huge effort to keep up with their needs.”

Jones and his LGH colleague Rich Ederle are servicing the account, making sure the contractor has what it needs, when it needs it. Some of the requests have been interesting, including the need for two A-frame type gantries.

“They have used them for several things, mainly for hanging hoists,” says Jones. “A-frame gantries also have been used as stabilizing devices for other lift and hoist projects.”

Two construction cranes are on the job, both on barges on either end of the bridge. Sipress says they are getting ready to lift the bridge deck using large gantries. “We have two barges already out in the water in preparation for hoisting the bridge deck in place,” he says. “Right now there is a lot of testing going on using water bags. They want to 'test the water' before they do the actual lifting the bridge deck.”

Sipress says residents of the Gig Harbor area are very excited about the new bridge, mainly because it will relieve traffic in the region in a big way. But also, he says the new bridge is exciting because of its unique architecture and heritage.

“It's a huge project and something I am proud to be a part of,” Sipress says. “I drive over the old bridge every day and it's fascinating to watch the new one being built.“