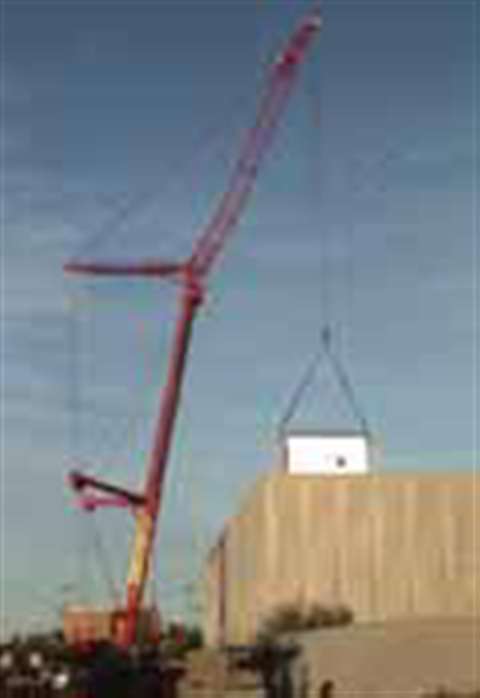 Southwest Industrial Rigging of Phoenix, AZ recently used its Grove GMK7550 with the Mega Wing Lift attachment for a series of complex jobs. One was to lift and place a 93,000 pound chiller on top of a building. Howard Kaplan, safety manager, explained, “The load had to be brought to the crane using our 750 ton self-propelled Goldhofer heavy haul trailer system.”

To rig the load, four 1½ inch wire rope slings were attached to four RS800DC nylon slings. Two of the nylon slings were lengthened, using eight shackles, due to the offset center of gravity of the load. The crane was at 99% of its rated capacity at the 91 foot radius with 161 feet of main boom and 120 feet of luffing jib.

The same crane with Mega Wing Lift but without the luffing jib was used to set the top of a water treatment tank (pictured above). “We used the mega wing and all the counterweight,” said Kaplan. “The load weight was only 55,000 pounds, but the working radius was 145 feet. Those who saw the lift and the pictures made jokes that Southwest Industrial Rigging assisted the military at Area 51 in the placement of a flying saucer,” joked Kaplan.