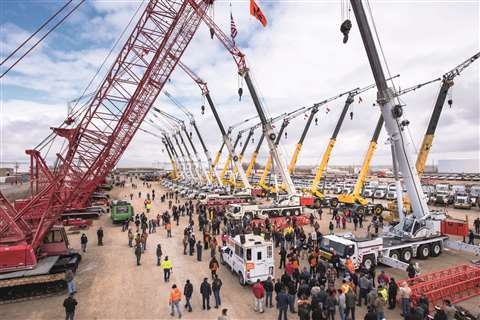 In such a big money market, it’s no surprise that the crane auction market is booming with high dollar purchases and a rising excitement in the industry.

To give an idea of just how impressive some of the numbers at these auctions get, on December 1, Ritchie Bros. Auctioneers concluded its final Fort Worth auction of 2016 that attracted 4,600 plus bidders from 56 countries, including 3,200 plus online bidders. With over $40 million worth of equipment sold, the auction saw buyers from the United States, Hong Kong, Cameroon and the United Kingdom.

“We saw a record number of bidders for this time of year,” said Bill Hogan, regional sales manager, Ritchie Bros. “The auction featured a great selection of oil, gas, power and utility equipment, general construction, vocational trucks and transport trucks, with strong bidding activity producing steady pricing across the board.”
In the lifting realm, Ritchie Bros. sold close to 1,700 cranes in 2016, an increase of approximately seven percent over sales in 2015, according to Doug Olive, senior vice president, pricing, at Ritchie Bros.

When it comes to who is participating in the auctions, the Ritchie Bros.’ customer base of crane sellers is a strong mix of end-users and crane rental companies. Brett Hoffman, senior appraiser at J.J. Kane Auctioneers, said that in J.J. Kane’s case, most cranes that are sold at its auctions go to an end-user, not a crane rental house.

End-user interest
“The SC&RA is made up mostly of large crane rental houses – people who tend to buy new cranes. That’s the major buyers of cranes,” said Hoffman. “That’s mostly due to the major costs of the cranes today and the fact that they need later model equipment to be a rental house. For contractors, rather than rental operations, at auctions that tends to be the buyer. There’s also the possibility for overseas markets, especially in the Florida market. A lot of that goes overseas because of the proximity to ports and things like that.”

“Our live auctions are unreserved, providing sellers certainty of sale and access to a global market,” said Olive. “We also have our EquipmentOne marketplace that offers sellers more control over the selling price and process. And we have Mascus, which is a global equipment listing service. Depending on the customer and/or the asset they are selling they may choose any one of these solutions. Our goal is to make the selling process as easy and stress-free as possible.”

Despite a somewhat tumultuous year for the crane market due to the slump in the oil and gas industry, J. J. Kane’s Hoffman is optimistic that things will be on the upswing in 2017.

“I think we’re going to move forward from here, and I would expect used crane prices to rise. I would be surprised if that didn’t happen,” said Hoffman. “I think we were at the bottom of the market last spring, and I think it’s coming around as far as the used crane market is concerned.”

“However, we continue to see pricing pressure on sector-specific cranes, most notably cranes from the oil and gas sector,” said Olive. “Cranes used in the oil and gas sector are built with very specific configurations, which minimizes the market for the asset. The more general the configuration of the crane, the broader the audience and better the results on auction day.”

J.J. Kane Auctioneers also allows buyers to bid on items both on-site and online, increasing the accessibility of the market. In addition to the hundreds of dealer-only auctions across the country, there is not a requirement to be a dealer to buy at the auctions. Buyers can connect directly with the sellers through J.J. Kane, allowing both parties the ability to exchange equipment at a fair price.

However, it is reasonable that some online bidders may be hesitant when it comes to quality control through this method. Iron Planet recently announced that it had conducted a record number of annual inspections. More than 100,000 pieces of equipment was evaluated and certified by its professional inspectors. With the merger of IronPlanet and Ritchie Bros.’ this can only mean reassuring things for auction technology.

“High quality, detailed and meticulous equipment inspections are a core component of IronPlanet offerings to buyers and sellers alike and that is what differentiates us from all other marketplaces,” said Matt Ackley, IronPlanet chief marketing officer. “This inspires a level of satisfaction and trust that continues to drive the growth of our online, as well as onsite auctions around the country and the world.”

But looking to the future of both online and in-person auctions, the springtime public sales in Florida always draw huge crowds of anxious buyers and sellers looking to add to their fleets.
“Our big annual February Orlando, FL auction usually has a large selection of cranes and transportation equipment for sale and we expect the same in 2017,” said Olive.

When it comes to what these buyers are looking for, it all comes down to how they plan on using the crane. Olive said the size and type of crane will depend on the job.

Ultimately though, buyers are looking for well-maintained equipment supported by documentation of its work life and maintenance records.