Has the up cycle still time to run 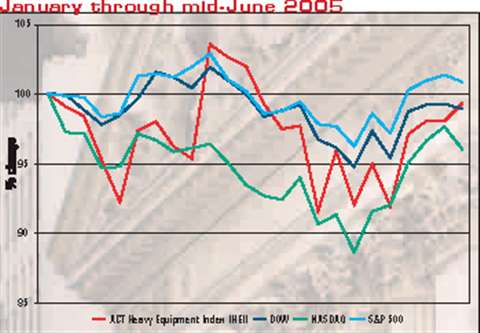 Almost half of the year is behind us already, and the stock markets do not have a great deal to show for it. The Dow is just over a percentage point lower than it was at the start of 2005, and the tech-dominated NASDAQ is even further of the pace. The S&P 500 is up a little on its position in January, but a gain of less than 1% in almost six months is hardly the stuff of legend.

ACT's own Heavy Equipment Index (HEI), a composite indicator that tracks US construction and other heavy equipment manufacturers’ stocks, is pretty much in line with these mainstream measures. It is within a percentage point of where it started at the beginning of the year.

But before you take your money out of the stock market, and put it somewhere better-under a mattress, for example-bear in mind that recent weeks have seen the situation improve.

Stocks rallied fairly well in late May and early June, correcting some of the losses seen in late April. Both the Dow and S&P 500 eased gently upwards, while the more volatile NASDAQ shot up more steeply from a deeper low.

As far as the heavy equipment sector goes, there were good improvements for both Caterpillar and Deere-the number one and number two in the construction equipment market. In terms of market capitalization, the share price multiplied by the number of shares, these two giants dominate the sector, together accounting for about 65% of the HEI.

Revenues have been on the up and up for these two companies for the last two years. More recent results have seen net earnings improve, with additional costs, particularly for steel, being passed on more efflectively.

Terex and Manitowoc, the two major crane manufacturers in the HEI, also saw their shares improve in late May and early June. This was thanks to the double whammy of up-beat first quarter results, and the general positive sentiment created by Cat and Deere's forecast-beating profits.

The question is of course whether the markets have peaked in terms of net earnings. The slide in share prices earlier this year, and slightly pessimistic analyst forecasts for the sector tended to suggest that the markets felt the peak had already come. However, the strong first quarter results and revised forecasts that many companies issued for the year suggest the current up-cycle still has a little time to run.

As ever, key data such as GDP growth and employment figures will be critical for the sector in the run-up to the half-year results season. It will also be interesting to see how the Dollar, which seems to be recovering from its historic low against the Euro in particular, impacts on export-heavy manufacturers.