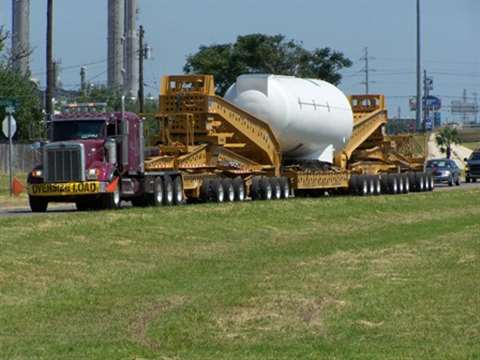 ATS Wind Energy Services has invested heavily in the last several years in equipment specifically for this industry. Regulatory issues of moving longer and heavier wind components continues to be a ch

Heavy haulers have had to invest in new equipment to haul wind components due to their increasing weights and heights. Permitting and regulatory issues continue to complicate matters. Jeff Hampton reports

Transporters of wind energy components are juggling the challenges of carrying ever-larger loads and maneuvering the continued tangle of permits.

"We've invested heavily in the last several years in equipment specifically for this industry," says Alan Redding, director of sales and marketing for ATS Wind Energy Services, the largest asset-based wind transporter in North America. "We try to move with our customers needs. As they evolve, we evolve with them."

And that evolution, as predicted, has gone toward taller towers, longer turbine blades and heavier nacelles.

"It's all getting bigger and more complicated," says Redding. "You can build bigger trailers to carry bigger components, but you can't change the infrastructure.

The industry is already at that point where we're pushing the envelope on the size that can be transported. There were challenges to move 1.5 megawatt turbines, but for the most part we could use existing trailer systems.

But now with the 2, 2.5 and 3 megawatt turbines, it's limiting the equipment that can be used."

It's also putting more stress on the planning and permitting process, which already is a challenge from state to state but also between municipalities and counties.

"Due diligence is becoming more intense for transporters," says Redding. "We have to work on route studies and planning much earlier to provide a quote to the customer, but also just to see if we can get it done.

"Our job is to get up-stream on the project as much as possible," he continues. "We have to look at the routes and work out the choke points before they become an issue."

Like most transporters, ATS witnessed the decline of wind business in 2010. "Development of wind projects hasn't been as robust as in the past, but hopefully some legislation is coming that will stimulate new projects," says Redding. "We need leadership at the federal level."

Meanwhile, 2011 is looking better and the outlook for 2012 is strong. "The long-term prospects of wind are very good," he says.

With Texas continuing to lead the nation in wind energy construction and generation, it's no surprise that the state is also leading efforts to ease the permitting pains for large cargo loads, including wind components.

The Texas Department of Transportation (TxDOT) is preparing to launch TxPROS, a "permit routing optimization system" that promises to streamline permitting at every level.

While many states have on-line permit systems, they are static, says Carol Davis, director of TxDOT's Motor Carrier Division. In contrast, TxPROS will have Google-style routing.

The system also will allow fully automated processing up to a certain load size, eliminating the need for processing by a TxDOT permit specialist.

"It's truly cutting edge. Nobody else is doing this," says Davis.

The good news for wind component haulers is that TxPROS will be able to handle up to 60 percent of permits for smaller loads.

"That will allow us to take people resources off the less complicated permits and put them on the more difficult permits," she says.

"With 14 people working on super heavy permits, the process can still take six to eight weeks. We'll be able to get that turnaround time down. We'll have more people resources to put on those super heavy loads."

North American shipping ports have seen a decline in wind-related cargo that mirrors what haulers and constructors have experienced, but port authorities are ready to handle more components when business picks up again.

The Port of Vancouver USA, the number one U.S. port for wind energy components according to the U.S. Census Bureau, handled just 25,000 metric tons of wind components in 2010 after a record-setting 101,400 metric tons in 2009. The decline is attributed to difficulties in the industry to secure financing for new projects.

"However, with the financing issue easing, indications are that 2011 will exceed our best year, and 2012 will be larger still," says Theresa Wagner, a spokesman for the port.

"With about 2,700 new wind turbines proposed to be installed within the four northwest states in the next three years, this import will be vital to the port."

The Port of Vancouver USA is the only port in the Pacific Northwest to have two 140 metric ton Liebherr mobile harbor cranes, which, used in tandem can lift up to 280 metric tons.

This heavy lift capability has the port prepared to manage ever-larger wind components.

"The port has invested heavily in the infrastructure and partnerships needed to drive down transportation costs for its wind customers and has built an expert team that stands ready to meet their special needs now and in the future," says Alastair Smith, senior director of marketing and operations at the Port of Vancouver USA.

"Cargo handling services for several wind projects are being discussed at the present time, however, there are no shipments listed on our current vessel schedule," says Valerie Harris, director of marketing.

The Port of Longview is ready to handle increased business when it comes. In 2008, it purchased a Liebherr LHM500S mobile harbor crane, and it has increased storage space to accommodate hundreds of tower sections and blades at a time.

Texas' lead in the development of wind farms has led the Port of Corpus Christi to beef up its wind handling capabilities, making it the largest importation point in the state.

In the last 12 months the port has added a third Class I railroad connection for wind components entering the state and headed to West Texas and beyond.

While wind energy components are still being sourced from around the world, an increase in domestic manufacturing is changing the flow of components through U.S. ports. The American Wind Energy Association reports that the majority of wind components are now sourced domestically.