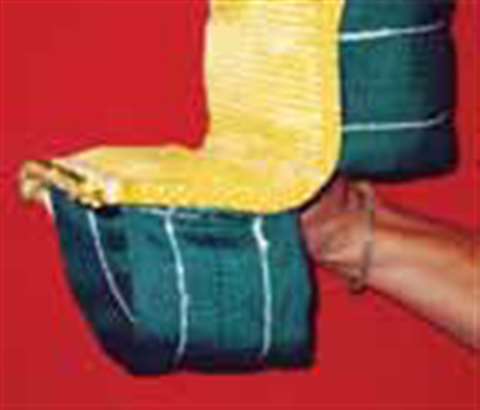 Back in the fall of 2006, an announcement was made by the Greek government concerning their finding of an early suit of armor. Reference was made to the year 1400 BC, almost 200 years before the Trojan War. This ancient attempt by warriors to protect themselves from the slicing, cutting, stabbing, and crushing blows of weapons of war has much in common with our own attempts at protection 3,400 years later.

The early armor makers used their knowledge of metal working to produce various types of shields, helmets, and protective plates to cover specific areas of the human form. Protection that required slightly less skill was called mail armor or sometimes, chain mail, because it was a series of connected rings surrounding sensitive areas of the body.

Armor or armour is defined as protective clothing intended to defend its wearer from intentional harm in combat and military engagements. In modern usage it can also be a heavily protected (armored) ship, tank or troop transport vehicle. Armor has been used throughout recorded history beginning with hides, leather, and bone before progressing to bronze, then steel and other metals. Today, modern armor consists of textile products such as Kevlar, Dyneema, Spectra, Twaron, Technora, and ceramic shields.

As a parallel in the world of sling protection we have used leather, rubber, nylon webbing, polyester pads, and advanced into the same high performance fibers used in protective armor clothing.

While researching this article on the internet and in other sources, I found mention of ancient armor plates sewn into wool coats pioneering recent technology where ceramic plates are sewn into pockets of Kevlar and Dyneema vests for added protection from bullets. The ancient art of armor plating was known to Europeans as well as people in China and Japan. As the power of weapons moved from the point of a sword to firearms, so too did the armor technology progress to stop penetration.

Perhaps in the annals of war there has never been as much attention paid to armor protection as that which is focused on the Iraq War and its much publicized road side bombs intended to kill soldiers in troop transport vehicles. The search for the perfect armor has always included attention to the weight of the finished product as well as its ability to withstand punishment from the most advanced weapons of the day.

Until the modern era, the trade off in weight usually demanded a reduction in protection. Today, with the new high performance textile fibers available weight is no longer an issue.

The protection of slings from cutting on edges has had a similar progression in technology as the new high performance textile fibers have become available. When we started making hand spliced wire rope and manila cordage slings in 1959, there was little attention paid to sling protection, at least in a formal way. Riggers used two by four inch lumber on either side of a steel beam edge to create a wider surface for sling contact and therefore negate the cutting ability of the edge.

In those days nearly, 50 years ago, there was not as much emphasis on safety, workers compensation, product liability, lawsuits, or industrial accidents in general. Accidents were treated as an unfortunate occurrence with very little in the way of consequences exceptforthe injured workers. Going forward in history this was all about to change and great pressure was exerted beginning in 1971 with the passage of the Occupational Safety and Health Act (OSHA). The act provided general safety instructions for the employer and the employee covering nearly every industry. After passage of OSHA, it was much harder for an employer to abdicate their responsibility for job site safety. Accident prevention became job number one for every body and sling protection from edges was high on the list of items that could be controlled and improved.

This period in the early 1970s also was the beginning of the synthetic sling age in overhead lifting. Nylon and polyester web slings had just come on the market in the late 1960s and were just beginning to make slight inroads into the riggers toolbox. Previously, nearly all overhead lifts on construction projects and in manufacturing plants were made with chain or wire rope slings. To facilitate the transition from steel lifting slings to synthetics required protection to prevent damage from edges.

Much like the transition of heavy steel armor to lighter high performance textile fibers, the sling business changed dramatically in the same way. The new textiles enabled the industry to create lifting slings for much heavier loads and establish protective devices that were equal to or better than their steel counterparts. As new synthetic heavy lift slings replaced wire rope and chain on the heaviest lifts, demand grew in the market place for protection inventions that would allow synthetic slings to be used for all types of loads, including stamping dies, steel coils, and steel beams.

First, a standard requirement had to be established for the element of protection necessary to prove a product before it could be advertised and sold into the rigging tool market. After a search of the slings available made from nylon, polyester, and high performance synthetics like Kevlar, Technora, Spectra, and Dyneema, and other combinations, it was clear the minimum requirement would be protection of 12,500 pounds per inch of sling width. This number was established by using the working load ofa 1-inch, four-ply nylon web sling in a basket hitch or an endless two-ply sling. For example, a sling of this type is advertised at 12,200 pounds rated capacity in a basket hitch so this became the minimum for protection.

The high performance style synthetic slings require minimum protection to 25,000 pounds per inch of width. This number gcomes from the width of the typical sling divided by the working load. A 600,000 pound-rated capacity sling in a 12 inch wide tube requires 25,000 pounds per inch of width. (Used in a basket hitch, two 12-inch tubes are side by side and in reality the sling is 24 inches wide.) Testing of protective devices beyond the minimum requirements provides a design factor.

Chart 1 shows the results of testing a 1-inch wide nylon web sling in a basket hitch around two steel edges using the indicated protection. The leather cowhide performed much better than some modern materials.

None of the materials used on a regular basis met the minimum requirement to develop the full breaking strength of a 1-inch nylon web sling used in a basket hitch aroundthe steel test edges. The CornerMax Pad protects the sling by keeping a space between the edge of the steel and the pad itself. There is no contact.

The CornerMax Sleeve is made from a heavy duty weaving process using 100% Dyneemahigh performance fiber that creates a product with very high cut resistance.

In today's world, the effort to increase jobsite safety and productivity is centered on high performance synthetics. The effort to increase safety and protection using high performance textile products in war goes hand in hand. The average police officer in cities across America also benefits from the new synthetic armor. Without chemicals and science the worldwould not be nearly as safe or productive either on the job or fighting the good fight against crime and enemies of the state.

The change in armor since 1400 BC definitely parallels the changes made in sling fabrication and protection. In 1988 the strongest roundsling had a rated capacity of 80,000 pounds. Today it is not uncommon for a roundsling to be fabricated with a rated capacity of over 1,000,000 pounds in a basket hitch and a weight 1/10th that of a comparable steel product. It is not uncommon for a suit of modern day armor to weigh less that 10 pounds compared to a 100 pound suit worn by the knights of old.