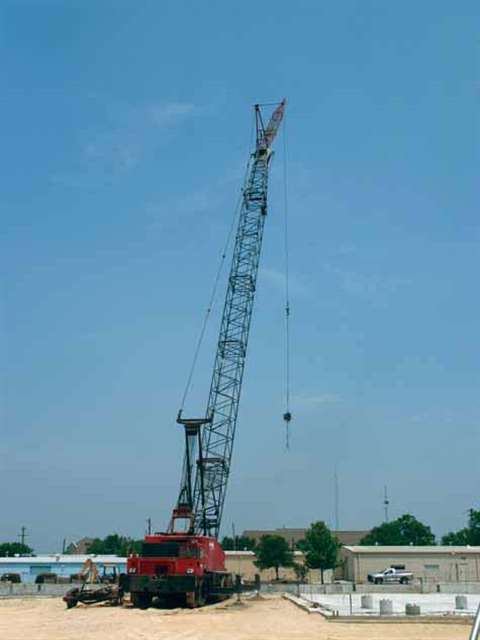 To meet demand, old cranes like this Link-Belt on a job in a small town in Central Texas, are being spiffed up and put to work

In April, a five–year–old LR 1800 Liebherr crawler crane sold at an auction on the West Coast for $3.7 million.

“It was a very strong auction, particularly the crane prices,” says Alan McVicker, Ritchie Brosfit regional manager. “The buyers came to the sale from around the world to bid on over 30 different kinds of cranes and good quality trucks and construction equipment.”

Used crane prices have “rocked OEM prices for new” says a crane industry insider who termed the market as “unbelievable.”

So what's the reason for such superlatives? The answer can be summed up in one word: backlog. At the recent Intermat exhibition in Paris, and through news releases outlining first quarter results, manufacturers report delivery times of up to a year or more both for mobile and crawler cranes. Such long waiting times for new equipment do not bode well for the rental company or contractor who has a job needing a crane now, not by year end or on into 2007.

“The availability on new cranes is so extended that the prices on used cranes are out of sight,” says Braxton Snyder, manager of worldwide sales at Link-Belt Construction Equipment Company. “If a company has the ability to buy a used machine and start to generate income from it today versus having to wait six or eight months to get a new crane, he will buy a used one. This is what is driving up the prices on used cranes.”

Pointing to the Oklahoma auction in May, several of the cranes there brought a higher price than new ones in the same class. “We have seen prices fluctuate in the market, but not to this extent,” he says. “I've never seen used prices go this high or generate this much interest.”

Snyder says the demand for used equipment is due, in part, to the strong economy around the world. “There's not a down market in the world,” he says. “There's a good market [for cranes] in Mexico and Latin America, Central America, and the Middle East market is hot. Everyone is looking for cranes and the manufacturers haven't been able to keep up with the demand for new products.”

“The market puts everyone in a tough position,” explains Ingo Schiller at Liebherr. “It's actually had a very interesting secondary effect as well. Because of the high equipment values, there are companies that are putting themselves up for sale.”

With used cranes selling for so much, companies can show higher assets. Both Essex Crane Rental and Marino Crane have made it known they are for sale. The market for used machines “has created a good opportunity for a business to show high equipment values and good cash flow, and if someone is willing to step up and buy such a business, now is a good time to do it,” says Schiller.

The market for used equipment is active because so many companies need to add to their fleets, Schiller explains, because they have more business than they can adequately handle.

“Basically, it's a seller's market,” he says. “Several folks in the industry are putting prices on their equipment with no real intention of selling unless someone comes along and offers to pay their asking price. And every now and then, someone does, and that's why we're seeing these record high sales.”

Other secondary effects created by manufacturer backlogs are an increase in the demand for repair and restoration services. Schiller explains that people are approaching Liebherr about fixing up their older equipment at the company's repair and service facility in Houston. “Th ey are wanting us to rebuild their older machines so they can get them out on jobs and working again,” he explains.

Snyder agrees, saying the vibrant market for used cranes has created a stronger demand for replacement parts, maintenance and service work. People are “fixing up” their old “fixer-uppers.” Old cranes that have been sitting in yards and not being worked are now being looked at as assets, he says.

“People are spending money to get those older cranes up and working and that does stimulate the parts business,” says Snyder.

WHECO Corp., based in Richland, WA, specializes in restoring older cranes and equipment that has been damaged in an accident and in performing service life extension projects (SLEP) on older machines. To keep up with demand, the company recently opened an operation in Aiken, SC just for this purpose.

“Service life extension projects can be a sound investment and provide an economic advantage to expensive equipment replacement,” says Dave Wood, WHECO president. “We help crane owners analyze a SLEP investment, and if that decision is made, we can perform repairs that can extend the service life and value of a piece of equipment.”

Even new crane manufacturers are trying to make the best of the market for older cranes. Mark Phillipi, asset manager at Terex Cranes, says that the reason his company got involved in the used crane market is the high demand for new cranes. “Virtually every manufacturer is working off a backlog - there are a lot of new crane sales but not a lot of new crane deliveries,” he says. “Production is stretched out so far that availability is driving the prices up of used cranes. Most customers can't wait six months for a crane.”

Liebherr has invested heavily in repair and service facilities in Europe and the US. Hans-Georg Frey, managing director of Liebherr-Werk Ehingen, says that his company has handled between 600 and 800 used cranes over the last year. “It is a nice amount, which gives us a good feeling for the market,” he says. “Right now there are hardly any machines available. Market demand is so strong that most of our customers sell their machines directly so that is why we are more at the 600 level whereas in other years we are more at the 800 level.”

While some manufacturers will take in cranes on trade, Link-Belt prefers to give that role to its dealer network. “We don't take cranes in on trade, but our dealers do,” says Snyder. “We are not in used crane business. We want our dealers to handle that. It's our job to design and build new cranes.”

“The market for used cranes is the best I've seen it in 10 years or more,” says Tom McCallum, director of industrial crane sales and crane remarketing at Manitowoc. “Everyone is selling everything they can get their hands on.”

Long gone are the days when selling an older machine was an arduous process. Selling a used crane is much easier, what with the “real time” element of the internet, which has become a powerful tool for buying and selling used cranes and other construction equipment. Stock lists can be updated instantly for potential buyers around the world and cranes have even infiltrated e-Bay, the online auction site where, at the time of writing, several cranes were available for between $10,000 and $40,000. The emergence of the web search engine Google as a first port of call for information of any kind has also made it easier for buyers to locate available cranes to buy, as well as to gauge prices.