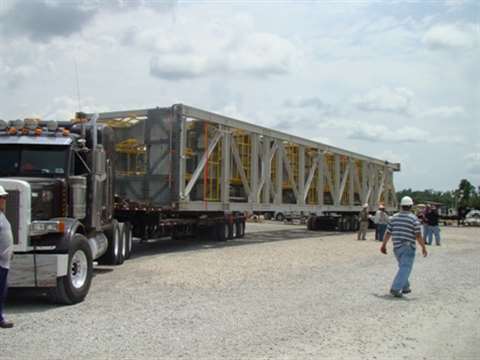 After several months of planning, measuring, weighing, routing and engineering, Bennett Motor Express' Heavy Haul divisionin the USA executed a strategy to move a huge amount of equipment from where it was manufactured in Baton Rouge, Louisiana to where it is being installed at a refinery in Shute Creek, Wyoming. Manufactured by Turner Industries, the modules were designed for a new type of Exxon gas refinery.

There were 12 large modules and some 35 to 40 flat bed and step-deck loads, according to Jim Wright, super haul agent for Bennett.

Bennett's hauling work started on July 12th when their crews entered the Turner Industries plant. A Turner Industries crane lifted the module onto the steerable dolly system that would be used to haul it to Wyoming, Wright said.

"We used dual lane dollies under that largest piece," said Wright. "We were running axles at 20 feet [6 m] wide so we could get the right weights required for all the bridges we'd cross in all the different states."

Throughout July and August Bennett's convoys journeyed between Wyoming and Baton Rouge, usually two at a time for the larger modules. Safety was a constant objective, Wright said.

"With the larger pieces we were running three escorts, two bucket trucks, a steer person for the trailers as well as a service truck to carry spare parts, equipment and tires that might be needed," said Wright.

Most of the trips were trouble free, with the only problem being weather conditions that prevented the first and largest module from being offloaded. "You couldn't have winds over 18 mph [29 km/h] to use the crane to lift the piece off the trailer," he says. "I think we sat there for a day and a half waiting for the wind to slack off for them to unload."

Wright said most of the steerable dollies used were either Trail King or Kalyn Siebert equipment.

While most of the smaller pieces weigh in the 140,000 to 150,000 pound (64 to 68 tonne) range, they are challenging due to center of gravity issues. "Some are going to have to be offset on a trailer," he said. "Some of those will have to be hauled on steerable trailers too."

The job required a bevy of equipment due to the odd combination of weights and configurations of the modules and equipment, he said. "This job involved a lot of equipment, mostly steerable dollies because of making the turns."