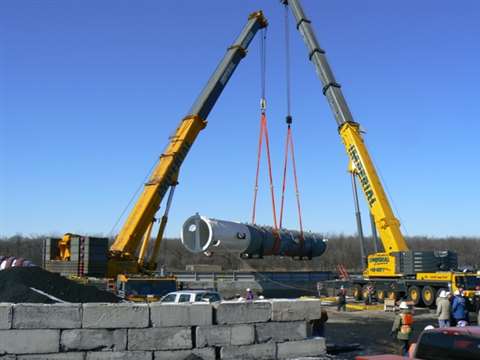 Using 500 US ton Liebherr and 550 US ton Grove all terrain cranes, Imperial Crane Services in the US executed a tandem lift to pick a 102 US ton reactor from a barge. The vessel, lifted from the Chicago Sanitary and Ship Canal barge at the Citgo Refinery, was then transported into the refinery as part of its Ultra-Low Sulfur Diesel (ULSD) project.

This was the first of five vessels Imperial Crane will be lifting, transporting and unloading for the ULSD project. The project will be used to meet new EPA standards for sulfur content in refineries. Next month, Imperial is scheduled to using its new 350 US ton Sany and 230 US ton Link-Belt crawler cranes to lift the additional larger reactors.

The 500 and 550 US ton cranes picked up the vessel simultaneously, the Liebherr then swung toward the Grove, putting the reactor into position to be placed on a 12-axle Goldhofer transport system rented from Barnhart Crane and Rigging. The reactor was then hauled into the refinery about a half mile away.