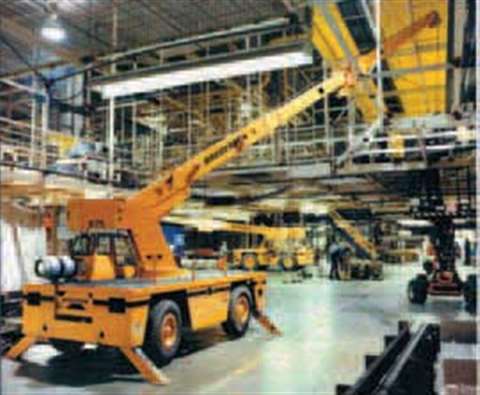 Its rental fleet of 200 industrial cranes puts All Erection and Crane Rental Corp. at the front and center of the market for this increasingly popular class of crane. “The demand for these cranes is huge right now,” says Norm Rados, national sales manager at All Erection. “As people start to recognize their versatility and advantages over forklifts or the larger down cab rough terrain machines, industrial or carry deck cranes are replacing other types in the market. For All Erection, they are easy to move to and from our many locations. We've placed large orders because the extreme demand in the marketplace has caused delays in production and shipping, and we want to have them when our customers need them.”

In North America, the major players in the industrial crane market include Broderson, Shuttlelift, Manitowoc and Valla. Manitowoc Crane Group sells Grove Yard Boss industrial cranes, an OEM of Shuttlelift. All four companies were caught off guard when demand for these machines began to grow about three or four years ago, and even more so in the last 18 months. Wisconsin-based Shuttlelift is working two full-time shifts to keep lead times down.

“The market for these cranes is hot,” says Kurt Minton at Shuttlelift, which manufactures one of the best known brands of carry deck cranes in the US. “Right now, Shuttlelift lead times are out 120 to 150 days. We are working two full-time shifts to keep those lead times from going to eight or nine months.”

For Shuttlelift, the biggest market for its 9 ton, 10.5 ton, 15 ton and 22 ton units is rental companies. “Following that are some of the refineries and chemical plants that are buying their own cranes as opposed to renting as they have done in the past,” Minton says.

Rados says that the industrial cranes in his company's fleet are between 2.5 and 22 tons capacity and the larger units are a newer addition to the fleet. All Erection has purchased some 325 industrial cranes since it began building its fleet. “Most of our customers rent these machines, however buyers would include power houses, the automotive industry, paper mills, steel mills and oil refineries,” says Rados. “The automotive plants and paper mills are probably the first and largest because of their ability to maneuver in tight, confined spaces.”

With a compact profile and the same capacities as many high reach fork lifts and down cab rough terrain cranes, buyers and renters use the cranes for pick and carry work.

In recent months All Erection has added two new 22 ton capacity Shuttlelift Model 7755s to its fleet. At 9 feet 10 inches high and 8 feet wide, the Model 7755 is approximately 24 feet long with the telescoping boom fully retracted, and has a reach of 67 feet for the main boom and up to 80 feet with the optional jib. The carry deck offers 60 square feet of load space.

All Erection's first new 7755 was recently dispatched to the McCormick Place West expansion project in Chicago, and it is being used with three other types of cranes from All Erection to erect precast (concrete) from inside the building. Rados says the project manager is pleased with the crane's ability to get into tight areas due to its four-wheel steering.”

In addition to the capacity enhancement, the YB7722 and the XL version have 15 ton deck capacity and 15 tons capacity on rubber. The YB7722 is equipped with a 43 foot three section boom, while the XL version has a 67 foot five section boom. A 17 foot offsettable jib is optional. The three-position pivoting boom head allows for operation in areas where headroom is limited. A standard quick reeve boom head and hook block allows operators to change from two-part to single-part line without having to disassemble the wedge and socket.

The YB4409-2 offers a three-section 31 foot main boom and a jib that can be offset. Its 9 ton maximum lift capacity is through 360° and not only over the front. The crane also offers lower ground bearing pressure with a 10% increase in outrigger pad area.

“Business has been excellent,” McCallum says. “We are sold out this year and we're already selling into 2007.”

The carry deck crane is a workhorse indoors and outdoors. “They are really sought after for doing maintenance work within a plant,” says McCallum. “They have a great capacity to carry material on the deck and drive off with it to another location. Or the operator can use it as a work bench for cutting and welding.”

Broderson and Shuttlelift compete for market share in North America, with both manufacturers basing their design standards on the markets they serve. “The engineering of all our models is based around a long list of design standards and safety codes,” says Minton at Shuttlelift. “Our rigging is designed using proper rigging standards. All hardware and pins are either zinc plated or stainless steel. All parts are blasted and painted prior to assembly.”

Shuttlelift's latest model is the 3339, a revision of the 3330. It can lift 9 tons at 360 degrees on outriggers. The three-section, fully hydraulic main boom with the 12 to 18 foot jib can reach 48 feet six inches. The crane's pivoting boom head allows for the lowest profile head throughout its lifting range.

At the other end of the spectrum Broderson offers seven carry deck models from half ton to 18 tons capacity. Dennis McKee says that the Broderson line is also selling very well in North America where Broderson distributors all report strong markets.

Broderson's RT 300-C is its largest model. Capacity on outriggers is 30,000 pounds and pick and carry is 18,300 pounds. Features include continuous slewing, four wheel steering and four wheel drive. Horizontal reach is up to 80 feet.

Italy-based Valla is also making its mark on the North American market through Valla Cranes USA. What distinguishes Valla cranes is that they are battery powered, which means an emission-free indoor work environment.

“With current legislation in the workplace, we are seeing an increasing demand for DC powered cranes,” says Peter Hird of Valla Cranes. “We do offer LPG and diesel powered options.”

Valla industrial cranes are available in capacities from just less than 5,000 pounds to almost 200,000 pounds, making them a competitor in a range of markets. Hird says applications for Valla cranes include foundries and forge shops, metal structure and welding works, pipeline manufacturers, stainless and specialty steel manufacturers, repair shops for agricultural machinery, municipalities, utility companies, and aircraft manufacturers, to name a few.