The gas and oil industry has been around for long enough to have seen its fair share of ups and downs due to economic cycles.

Turbulence caused by the Covid-19 pandemic, combined with longer-term shifts in consumer behaviour, means that the next decade could see substantial changes for the gas and oil markets – and subsequently the crane and transport market that serves it.

For some large equipment manufacturers, such as Switzerland-headquartered multinational Liebherr, the transition away from gas and oil is evident but not necessarily negative.

Christoph Kleiner, managing director at Liebherr-Werk Ehingen mobile crane division in Germany, in his interview with ICST editor Alex Dahm in the April issue, said, “Twenty years ago money that would have been spent on fossil fuels and infrastructure is now spent on renewables and infrastructure. The advantage for us: nothing builds without cranes.”

The benefits of having an extensive product portfolio, such as Liebherr, or a fleet extends to large rental and specialist lifting and transportation companies such as Dutch heavy lift and transportation expert Mammoet – which can simultaneously serve the oil & gas and renewable sectors, both onshore and offshore.

The scale Mammoet can operate on is perhaps best encapsulated in this video that the company released in April 2021, which reviews the work it conducted at the Dangote Oil refinery in Nigeria.
Click here to view video. 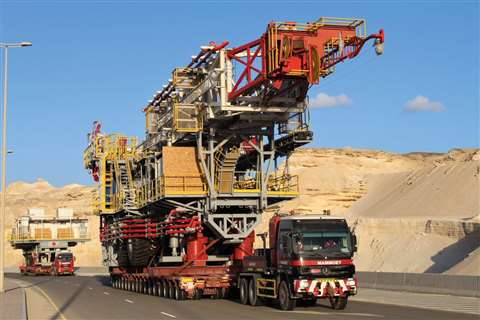 In total it moved and lifted more than 52,000 tonnes of construction components, including a 2,000 tonne crude column, which is believed to be the largest ever fabricated, and a 3,000 tonne regenerator that Mammoet claimed is the heaviest item ever transported on public roads in Africa.

A further large gas and oil transport job completed by Mammoet was for two pre-assembled onshore oil rigs and accessories, weighing between 147 and 471 tonnes, from a fabrication facility in the United Arab Emirates to a site in Oman.

Higher payloads
Specialized transport equipment manufacturers are responding to the increasing weight of pre-assembled loads being moved by manufacturing modules with even higher payloads. German manufacturer Scheuerle, for example, has expanded its SPMT PowerHoss series by adding a six-axle unit with a 330 tonne payload.
Click here to read news story. 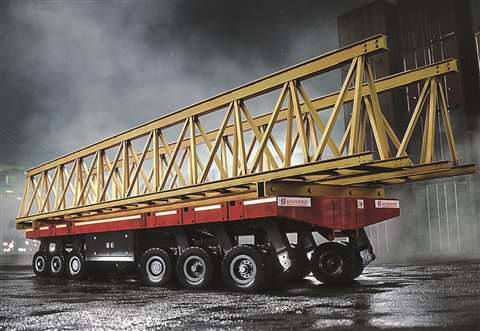 As well as powerplant work, Scheuerle states that the PowerHoss is well-suited to construction, mining, petrochemical, shipyard and steel sector applications.

Sarens is another multinational with an extensive fleet and geographical reach, enabling it to serve the energy market globally. The company announced in February 2021 that their USA business operations would be increased in large southern states on top of new projects on the north-eastern coast. The projects in the north-east centre around offshore wind farm work, while the petrochemical industry is driving business in the southern region.

With three of Sarens’ four regional offices in the south – Louisiana, South Carolina and Texas – with the fourth in the Midwestern State of Wisconsin, it is clear the southern oil sector remains important to the company.

Sarens concluded a three-year project on a coal-fired power plant in the town of Ptolemaida, Greece, in June 2020. During that time Sarens worked with the Greece construction company Terna, whose headquarters are based in the Athens, to carry out more than 100 lift and tackle arrangements and install around 20,000 tonnes of new elements.

This new power plant was being constructed inside an old coal mine pit in the mountains of Greece. As the plant construction progressed, the available space became more limited, and cranes had to lift higher and further to continue installing new elements.

The configuration of the cranes was changed multiple times to adapt to these new circumstances. During that period, multiple tailing operations and tandem lifts were executed and a LR 1750 was assembled inside the cooling tower.

The CC 8800-1 remained on site a few months, for the installation of a gas flue duct. The LR 1750s remained on site for three years and were used for a range of lifts, including ducts, equipment and steelwork. The CC 2400-1 was on site for 18 months. A lifting supervisor guided the crane operators while a site manager oversaw organisational matters.
Click here to read news story.

The largest crane on site was a 650 tonne capacity Demag CC 3800-1 lattice boom crawler crane, used to install 16 double-wall heat recovery steam generators as part of an expansion of the power station. They will be used to recover the gas power plant’s waste heat and improve efficiency.

The 20-hour setup of the Demag CC 3800-1 was undertaken by a team comprising a crane operator, a supervisor and five assembly technicians. It was set up in SSL and then SWSL configuration. Due to the SSL configuration and limited space available, the crane’s 66-metre long boom had to be assembled at height rather than on the ground.

The 16 steam generators that the CC 3800-1 lifted were 28 metres long and weighed up to 80 tonnes. They were lifted to a height of just under 60 metres at a radius of 40 metres. The Al Faris team used an SWSL configuration with a 48-metre main boom, a 36-metre fly jib, and a Superlift counterweight of 165 tonnes with a radius of 11 metres.

For these lifts the CC 3800-1 was assisted by a 250-tonne crawler crane from the Al Faris fleet, which picked up each heat recovery steam generator from one end so that the CC 3800-1 could bring it to a vertical position. After this the 250-tonne crane let the CC 3800-1 take the full load and the crane then moved each generator into position. It took around two months to complete these 16 lifts, plus additional lifts, rigged in SWSL configuration.

“Handling the long boom components really demanded a great deal of our team, but they were able to take care of that smoothly and not in small part thanks to the crane’s ease of assembly.”

Three years for Fagioli
Another large lifting and transportation specialist serving the oil and gas industry in multiple locations is the Italy company Fagioli, whose headquarters lie in the Emilia-Romagna region near the city of Bologna.

Fagioli announced at the start of 2021 that it had won three oil and gas industry contracts worth a total of €80 million (US$97m). Fabio Belli, Fagioli CEO, explained that these contracts are for projects in Africa, Asia and the USA and are scheduled to be carried out over the next three years.

The African project was awarded by a joint venture of some of the most important global players in the sector. It will involve lifting, transport and project forwarding of modules and heavy equipment for the LNG plant.

The contract in Asia is to lift seven reactors, each weighing up to 2,000 tonnes, on a refinery modernisation project in Thailand. Installation will be done using a system of “translating” lifting towers, designed by the Fagioli engineering department, and made in-house — it will be the largest of its type in the world.

Fagioli’s Houston subsidiary scooped the third contract, which will involve handling and installing process modules in Louisiana for the construction of a new gas liquefaction plant — one of the largest in the Gulf of Mexico.

Belli explained: “Fagioli’s 2020 turnover will reach about €200 million euros, slightly up compared to 2019 (€195m), an incredible result considering the health emergency that has affected all continents.”

Sarens estimates that only 11 per cent of the projects it had planned for 2020 were postponed for the next few years, and just 6 % was reconsidered, although not cancelled.

While there may be clouds on the horizon for the oil and gas sector in the form of the growing renewable energy market and the rapid rise of electric vehicles, for now the sun is shining across Africa, Asia, the Middle East, the southern states of the USA and other oil and gas producing regions.

Even better, in many of these areas governments are also starting to simultaneously develop their renewable sectors, and as Kleiner rightly pointed out “nothing builds without cranes.”

See the June 2021 issue for information on transportation for the wind sector.

A 2,086-tonne reactor (with dimensions of 62 x 8 metres) and a 921 tonne reactor (measuring 59 x 8 metres) have been transported from their point of fabrication in Italy to an oil refinery in Sriracha, eastern Thailand.

Walter Tosto, the Italian equipment supplier to energy, gas and oil markets, was commissioned to move them between the point of fabrication in the east coastal city Ortona to a barge in a nearby dock. Walter Tosto used 80 axle lines of SPMT from manufacturer Cometto. 32 lines of the SPMT came from Walter Tosto’s own fleet, while the rest it sourced from a partner company. 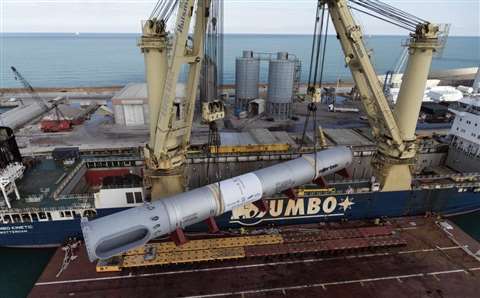 Jumbo dealing with a reactor using a K-class heavy lift vessel
The reactors were loaded onto the barge and then lifted onto the Jumbo Kinetic heavy load vessel, owned by Dutch heavy lift shipping and offshore transportation and installation contractor Jumbo.

According to Jumbo, this lift was the heaviest reactor a K-class heavy lift vessel has lifted to date, smashing the vessel’s own record of a 1,929 tonne wash tower in August 2019.

To meet the 6.8 metre draft restrictions in the deep-water port of Ortona, the Jumbo team first lightened the vessel by removing the tween decks and pontoon hatch covers. This resulted in a precise heavy lift with a shallow draft.

The Jumbo Kinetic crew then continued sailing up the coast to Porto Marghera, where another two reactors weighing 1,850 tonnes each and measuring 59 x 8 x 7 metres were waiting. Each reactor was loaded from a barge using Jumbo’s cranes and placed on deck. All cargo was safely secured and sea-fastened before the vessel set off on the last leg of its journey to Laem Chabang in Thailand.

These four reactors were unloaded in Laem Chabang, by the Jumbo Kinetic cranes directly onto extended trailers waiting on the quayside.

The reactors are to be used as part of oil company Thaioil’s Clean Fuel Project, designed to produce cleaner transport fuels in a more environmentally friendly way. Their new process will remove dust emissions, oxides of nitrogen and sulphur from its Sriracha Refinery in the Chonburi Province in the east of Thailand.