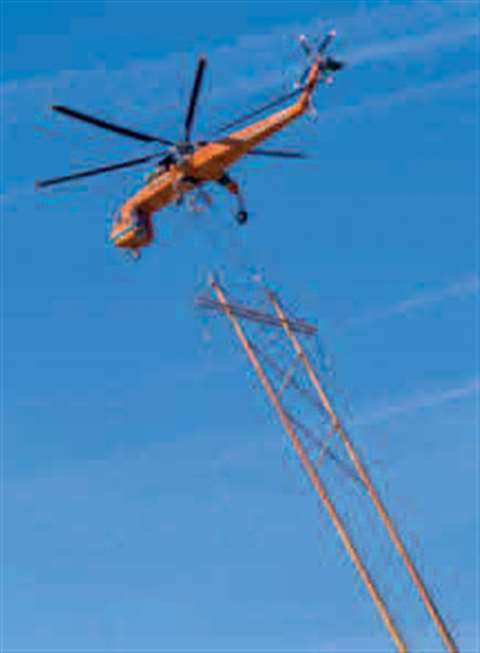 All eyes were skyward in Kearney, NE last month when a Sikorsky-64 “air-crane” helicopter lifted a 15,000 pound transmission structure and placed it into pre-dug holes. With the structure in place, rebuilding was begun on a 230-kilovolt power line owned and operated by the Nebraska Public Power District.

The line was one of 37 transmission lines damaged during the New Year's weekend ice storm. Onlookers watched as the helicopter crew put into place 55 out of the planned 439 structures.

“ Using the air-crane to move the structures from the fly yard and into place allows NPPD to expedite restoration of the transmission line,” said Barry Campbell, general manager of operations for the power company. “Our goal is to have the entire line up before our peak load comes this summer.”

The air-crane was operated by Erickson Air-Crane, a company specializing in heavy lift operations.

Reconstruction of the 190-foot towers will be completed using conventional construction cranes to lift and hold the steel sections into place while crews secure the structure into place.