How did Stephen Jehle, president of P&J Arcomet, go from a career as an aviation finance executive to being the president of a leading U.S. tower crane company? It’s an interesting story.

As a youngster and young adult, Jehle aspired to be a fighter pilot. He studied at Embry-Riddle Aeronautical University, earning a degree in Aeronautical Science and obtaining his commercial pilot’s license. Due to the need for corrective lenses, he lost eligibility for the Air Force, so he changed gears and pursued a career in the commercial aircraft financing industry. 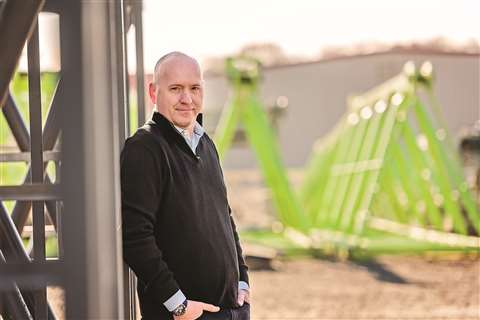 “We wanted to set the bar in the industry of what to expect when you rent a tower crane.” Stephen Jehle, President, P&J Arcomet

“I landed a job at Newcourt Capital, doing structured operating leases, leveraged leases and manufacturer financing for the likes of Bombardier, Northwest Airlines and the like,” he said. “This was a wonderful incubator for a young ambitious mind and I quickly took to the world of equipment finance and management.”

It was Jehle’s father, Peter Jehle, who had spent his career in the tower crane industry. He worked in the technical side of the business, eventually serving as vice president of American Pecco, which eventually was sold and became what today is Morrow Equipment.

The idea for P&J Arcomet was hatched after he visited his parents over the holidays.

“My father was thinking of doing something on his own,” Jehle said. “I saw a lot of commonality in leasing airplanes versus tower cranes. I drew up a business plan and was able to get financing put together while my father secured our relationship with Terex, which had just acquired Peiner (American Pecco’s previous owner). With financing in place and a distributor agreement with Terex, we launched P&J Cranes and immediately focused on what to this day is our hallmark: providing our customers with a superior product from the technical support side, safety, engineering, regulatory concerns and quick response on down equipment. We wanted to set the bar in the industry of what to expect when you rent a tower crane.”

His background in finance became invaluable. During the 2001 Bauma exhibition Jehle and his father met the late Dirk Theyskens, who owned Arcomet and was looking for some help with a repossession in the U.S.

“Having done this more than once in my aviation days, I knew the legal steps and was able to quickly get the cranes back,” Jehle said. “I asked Dirk if he would let us re-rent the cranes and he agreed.”

Before long P&J Cranes started to rent more units and although they were acquiring their own fleet, it wasn’t fast enough.

“Arcomet began to ship units over as it was a perfect way to supplement our own fleet as customer demand rose faster than we could keep up,” Jehle said. “By 2005 much of the industry had taken notice of P&J and we had been propositioned by a few competitors who wanted to acquire us. We wanted to grow but I still wasn’t willing to give up control, so Dirk Theyskens proposed a Joint Venture where P&J would become the North American division of Arcomet, but still retain its independence. It was a natural fit and in 2005 we formed the JV and became P&J Arcomet.”

Since then the company has continued to expand, yet still follows its core philosophy.

“And although Arcomet ownership has changed hands, our commitment to being a member of what is now Uperio is stronger than ever as we have a shared belief in supplying a higher level of services,” said Jehle.

American Cranes & Transport had a lot more questions for Jehle. His answers are interesting and forthright.

What is the scope of operations of P&J Arcomet?

P&J Arcomet wants to be the best at what we do, so we stick to tower cranes as our focus – top-slewing and self-erecting tower cranes for the North American market including not just rentals, but also sales of new and used parts, engineering, overhauls and warranty work.

What distinguishes P&J Arcomet in the markets it serves?

While we have explored acquisitions, we tend to grow more organically as we emphasize our high level of service capabilities first. We find our customer base recognizes us as the leader in technical competency, quality equipment and reliability. Our niche is not being the cheapest, but saving the customer money over time with more reliability and thus great production on their jobsite.

You’ve been in the tower crane business for almost 20 years. What does it take to succeed in this market?

Understating that this is a people business first and foremost. Whether it be in hiring and training the best and brightest, creating a culture of excellence and real passion for this higher level of service we offer, to developing relationships with customers where there is a partnership rather than just a business relationship. We are both in this project together and we are all on the same team. When this is what you are known for then when challenges do arise it becomes much easier to handle them.

How do you characterize the current market for tower cranes?

The North American market right now is still very strong. We have seen a slight downward pressure on prices lately, more so due to a lot of new units on the market by the various rental companies, many of whom use price as the only lever to gain more business as they cannot compete technically.

What are the biggest challenges in the tower crane sector?

Sadly, our industry has seen a few fatal accidents this year and this will put a lot of scrutiny on safety standards and insurance demands. More contractors are looking for a total turnkey proposition where we take care of all aspects regarding the tower cranes on site. They want to push down that responsibility and I think P&J Arcomet is well positioned for this, as it has always been part of our culture. The pressure will be on for those who don’t do it as well though.

Which cranes in your fleet are in the most demand?

In North America, the 400-metric ton tower crane has been the work horse since I can remember. The Terex SK-415 is for many the original standard bearer, and the Zoomlion T-8030-25 has performed beyond expectations and is now often the preferred choice due to its reliability and capacities.

Has Zoomlion’s acquisition of Wilbert affected how you do business in the U.S.?

Not so much yet, but we are working closely with the Zoomlion team in the development of new products that combine the best of Wilbert and Zoomlion. We now are able to offer an 85 meter jib length and just over 300 feet free standing on the T-8030. All I can say is stay tuned.

Your company also is a distributor for Terex tower cranes. Do you envision any change with Terex’s sale of Demag?

As we are not in the mobile crane market, we do not see any significant changes here. Terex has been a great partner over the years, and we do not see changes on the horizon. Ruedi Van Coppenolle was recently hired as our COO after spending 29 years at Terex. I think that says a lot about how highly we regard Terex and the people there.

What is it about this business that keeps you engaged?

The tower crane industry never stops being demanding and challenging. There is no cookie cutter in this business, and I love that each day I come to work I have a new challenge in front of me that is different than the day before.

What is your business philosophy?

Each day we start at zero and go from there. Stay focused on your long-term goals and don’t get off course by chasing short term things that will not contribute to the bigger objectives and only weigh you down over time. This is a big failing of many crane companies out there. My financing background taught me to be very analytical and I do not make decisions based on gut feelings, but rather deliberate moves based on sound business principles. People come first and we often call this our P&J Family. That is something my father taught me, and I’ll never forget it.

What do you do when you are not working?

Work. LOL! I am blessed to have an amazing family and two wonderful kids. When I am not working you can usually find me with them at some event. Personally, I love to fish, swim, scuba, boating, you name it, so I like to spend time on the water to get away from it all and re-charge.