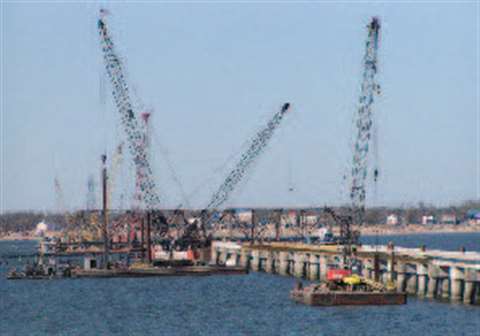 The company has secured contracts to work on the Gautier Bridge, the Biloxi Bay Bridge and the Bay St. Louis Bridge, all in Mississippi.

“The 10,000 foot long Bay St. Louis Bridge was totally washed away with nothing left except for the pile caps,” said Don Jordan, vice president. The project was divided between Jordan Pile Driving and Scott Bridge, with Jordan handling the eastern half of the contract and Scott handling the western half back to Lake Pontchartrain.

“We are replacing all the steel spans on all three bridges and repouring and resetting the slabs,” he said. “There's a lot of work to be done on the Bay St. Louis Bridge which includes lifting the 150-ton concrete spans that made up the deck of the bridge. They were washed north, and they are lying in the water.”

On the Bay St. Louis Bridge, crews have been working seven days a week since the storm hit. Subcontractors include Dawson Bridge and Kudzu Marine.

On the 1,550 foot Gautier Bridge, 90-ton steel spans were washed off the foundation and intermediate bents were destroyed. Steel spans were lifted out of the river, transported by barge to the shipyard for repair, and then transported back by barge to be reset. This job required driving 24 feet of piling and the resetting of the reworked steel spans. Subcontractors included Colle Towing Co. and Offshore Inland.