Moving over-sized, over-dimensional loads during the day is no easy task. Adding darkness and poor visibility to your trip adds numerous hazards that must be thoroughly identified and mitigated.

When planning a specialized transportation project, there are three primary objectives:

It can’t be emphasized enough how critically important it is to ensure that all transport crew members have had adequate rest for these projects. Workers need complete rest before the transport takes place. A fatigued worker is a danger to himself as well as his fellow crew members. And while impaired drivers can be out on the streets during the day, there is often an increased number of these drivers on roadways at night.

Limited visibility is a given when it comes to night-time transports. Limited visibility increases the chance of going off route and striking objects, and the transport driver’s maneuverability and reaction time maybe be reduced. Road conditions can abruptly change during a night-time transport. Therefore, it is critically important to know the route and to have drivers run it in advance. Statistically speaking, accident frequency increases when the transporter goes off route and attempts to correct itself. While providing the necessary lighting to make night transport is important, artificial lighting can pose visibility hazards, especially to the drivers. Other hazards may include bright work lighting that produces glare.

OSHA has identified the “Focus Four” accident events that make up the most serious injuries and fatalities in the construction business. They are also known as the “Fatal Four.” Many carriers have had employees injured in the past as a result of one of these four incidents.

Caught-in-between hazards are injuries resulting from a person being squeezed, caught, crushed, pinched or compressed between two or more objects or between parts of an object. This is also referred to as “pinch points or entrapment.” As the transporter navigates its designated route the landscape is continuously changing. It is imperative that all ground crew members maintain situational awareness and not place themselves between the moving transporter and fixed objects such as guardrails, parked vehicles, buildings, etc.

Struck-by hazards are injuries produced by forcible contact or impact between the injured person and an object or piece of equipment. There are many potential struck-by hazards. Guide wires that must be raised can snap and strike workers on the ground. Tag lines should be used to control loads. The primary purpose of using tag lines is to control the load but more importantly give the worker a safe buffer distance away from suspended and the uncontrolled movement of these loads.

Fall hazards are anything that could cause an unintended loss of balance or bodily support and result in a fall. To prevent fall hazards all workers should have either fall prevention or a means of fall protection in place. As a rule, 100 percent tie off is required when using a fall arrest system (FAS). FAS’s should be thoroughly inspected before each use.

The keys to a successful night transport

Electrocution hazards result when a person is exposed to a lethal amount of electrical energy. Maintaining minimum approach distances (MAD) is a critical safety practice. As everyone knows, equipment does not have to physically make contact with energized equipment or lines to cause serious injuries and even death. Electrical energy can “jump” from lines into equipment that has encroached the Minimum Approach Distance based on its voltage.

As noted above, it is critically important to ensure that crew members have had adequate rest and are not fatigued. Night transports are difficult enough, and the last thing you want to introduce are tired and fatigued workers. Being fatigued creates a risk for anyone who undertakes an activity that requires concentration and a quick response.

All companies should have an “Hours Worked Policy” that clearly spells out the number of hours allowed to work before a mandatory rest period. This policy should ensure that the transport crew has had adequate rest during day, that a fatigue assessment is conducted on all team members, that crews are never allowed to work double shifts and that employees are prohibited from driving long distances to return home. 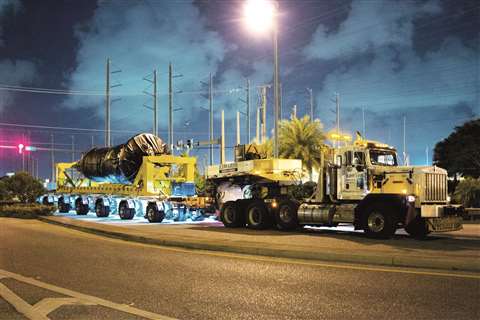 Project planning should include visibility and slowed reaction times.

Visibility and slowed reaction times should be a part of the project planning. A limited amount of ambient light that only projects upward and outward impedes vision and increases blind spots for drivers. Lights cast shadows, increasing the potential for slips, trips and falls.

All transport moves should establish pre-planned Emergency Action Plans. When an emergency occurs, time is of the essence and can mean the difference between life and death. If it is a long-distance move the emergency numbers and first responder information can change. Crews should know when it’s time to seek emergency “safe harbor.”

When approaching overhead obstructions such as guide wires, electrical lines, communication lines and overpasses, travel speed is of utmost importance. Again, pre-route surveys provide advance knowledge of obstructions. At night, visual identification of roadway obstructions is reduced and delayed and last second reactions to oncoming hazards can lead to accidents. Support personnel in bucket trucks also have the challenge of reduced visibility. 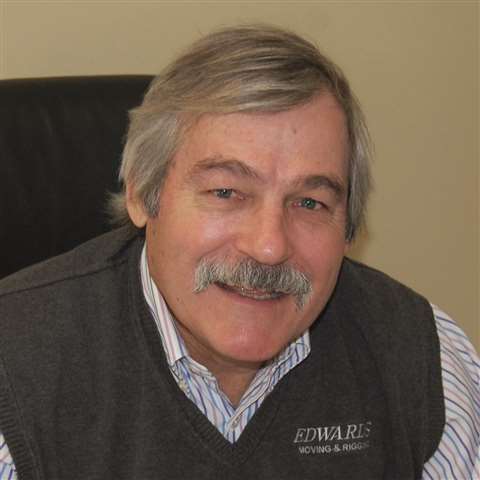 Danny Cain is director of safety and risk management for Edwards Moving and Rigging. This article was adapted from a SC&RA webinar and a presentation he gave at the SC&RA Specialized Transportation Symposium in February 2019 in Houston. To see the complete webinar please log on to the webinar homepage at SCRAorg.net.

Traffic control can also create hazards. The general public may ignore pilot car lights at night, so it’s often advisable to also use police escorts. All support vehicles and trucks should be properly marked and equipped with strobe lights.

The configuration of the transport system can also be a hazard. Navigating sharp turns or crossovers is greatly reduced based on the length of transporter. Snake-like maneuvers of trailers pose an increased risk.

It’s important to never allow personnel to take shortcuts by walking through or under transporter while it’s in motion. Stop or have the worker go around.

Components that hydraulically extend and retract should be clearly posted with DANGER signs.

Roadway conditions are always a bigger concern at night. Assess weather conditions prior to start of the project and don’t take chances. A “Go – No Go” criteria should be developed for each project. Once the decision is made to transport the load there is no turning back. Changing weather can cause the transporter to lose traction. Underpasses that are shaded during the day will likely freeze up more quickly. If the temperatures drop significantly during the move, equipment performance may be affected – especially those with hydraulics.

Because the reaction time of the transport crew is reduced, speeds are often reduced, causing potential for curfew violations. Boarding and deboarding the transporter increases risk for slips and falls. Other potential road condition hazards include grade of road, width of road, shoulder surfaces, railroad crossing clearances and bottoming out, overpasses, tight and narrow turning lanes, parked vehicles and frequent grade changes.

Crew prep is essential and should be a part of the job plan and job training. The team should be briefed each day to identify the responsibilities of all crew members. The crew should know it is empowered; everyone has the authority to stop the transport if something looks unsafe or when someone is unsure. In

the event of a complication, crews should be informed of how to regroup and formulate a mitigation plan. There should be an established means of communication that is limited only to transport issues. Most importantly, crew should embrace these words: When in doubt, call time out!

A Task Hazard Analysis (THA) should address all scope of work activities, identify hazards and have a mitigation plan for each, clear channels of communication, the traffic control plan and an “Emergency Preparedness Plan.” And finally: Know the route; ride the route and expect the unexpected.