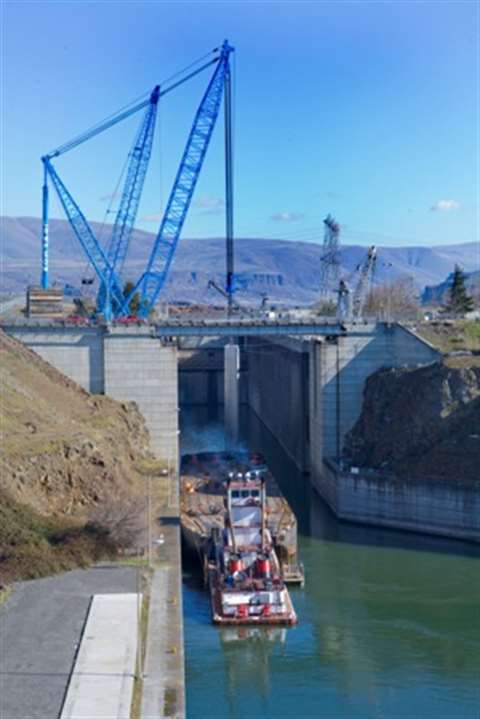 At The Dalles Dam on the Columbia River, Lampson International mobilized a Manitowoc 4100W, a Manitowoc 3900, a Grove 760E rough terrain crane and its Transi-Lift LTL-1100.

More than 4,000 dams in the USA have been identified by the American Society of Civil Engineers as deficient. In 2009, the ASCE determined that 1,819 dams are in the "high hazard potential" category. Needed work at dams includes everything from gate replacement to total reconstruction.

The problem with dam projects is that they are expensive and require extremely heavy lifting. Little by little, authorities are bringing deficient dams up to par. Lampson International has found a strong market for its heavy lift cranes on dam projects throughout the United States.

"The demand for cranes at dam projects is steady," says Kate Lampson of Lampson International. "Our Transi-Lift cranes can do this work and are often the crane of choice for dam construction and repair."

In 2010, the US Army Corps of Engineers and their contractor, Dix Corporation, approached Lampson about renting one of its Transi-Lift LTL-1200 cranes to perform a gate replacement at Lower Monumental Dam in Washington State.

With a narrow staging area, Lampson was faced with a challenging assembly of the superlift crane. To assist with the construction of the Trans-Lift, Lampson used several of their own conventional crawler cranes and a Manitowoc 4100 equipped with a Ringer attachment. One of the most important aspects of a job like this is assembling and load testing the Transi-Lift crane.

Lampson supplied four of its crew on site at the Lower Monumental Dam throughout the six-month project, which was completed in early 2011.

Also in the fall of 2010, the US Army Corp of Engineers and Dix Corporation again hired Lampson International to replace the downstream navigation lock gates at The Dalles Dam on the Columbia River, also in Washington.

The scope of the project included removing two old gate sections and laying them down for demolition, offloading two new gate sections from a floating barge and finally, installing the new pre-fabricated gate sections.

In order to assure the proper equipment for the project, Lampson International mobilized a Manitowoc 4100W, a Manitowoc 3900, a Grove 760E rough terrain crane and its Transi-Lift LTL-1100. The Transi-Lift was also assembled on site and rigged with 200 feet of main boom and 2,400 kips of counterweight. After assembly, the Transi-Lift was load tested for the approximately 870,000 pound new gate sections slated for replacement.

During the preparation for the new gate installation, weight estimates grew from 725,000 to 949,000 pounds. While the new numbers were within the Transi-Lift's capacities, Lampson was required to reconfigure the crane. This was completed in one ten-hour shift. The crane was reconfigured to gain 200,000 pounds of capacity.

The project spanned six-and-a-half months. Like most dam projects, there was a very confined work space for the cranes to operate.

"There are many unique challenges to doing dam work," says Lampson. "Our proprietary Transi-Lift cranes, coupled with exemplary planning by the Dix Corporation team, allowed the river to open on schedule for commercial navigation."