The TWA Hotel at John F. Kennedy International Airport is a landmark project that brings new life to architect Eero Saarinen’s iconic TWA Flight Center terminal built in 1962. MCR and Morse Development “have restored the historic building and have reimagined it into a first-class hotel,” according to twahotel.com. 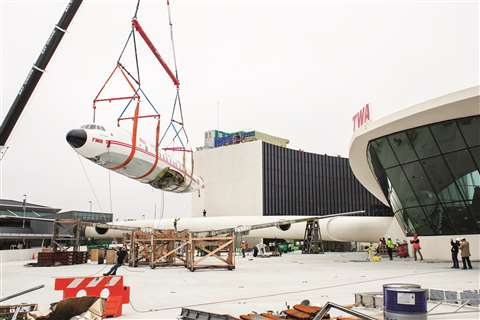 The fuselage was hoisted using Bay Crane’s Liebherr 1300 rigged with 212K of counterweight. Weighing 17,800 pounds, the plane was lifted at a radius of 97 feet. PHOTOS COURTESY OF MCR.

With its wing-shaped roof and tall windows that enable expansive views of departing and arriving flights, the original design of the building encompassed Futurist, Neo-futurist and Fantastic architectural styles, according to Wikipedia’s TWA Flight Center webpage. Saarinen also designed the St. Louis Gateway arch and Dulles International Airport, among other high-profile buildings and structures.

Opening this month, the hotel has 512 guest rooms, 50,000 square feet of meeting space and a 10,000-square foot observation deck. It also will have six restaurants and eight bars, one of which is an actual TWA airplane, a 1958 Lockheed Constellation airplane, known as Connie N8083H, which has a colorful and storied history. 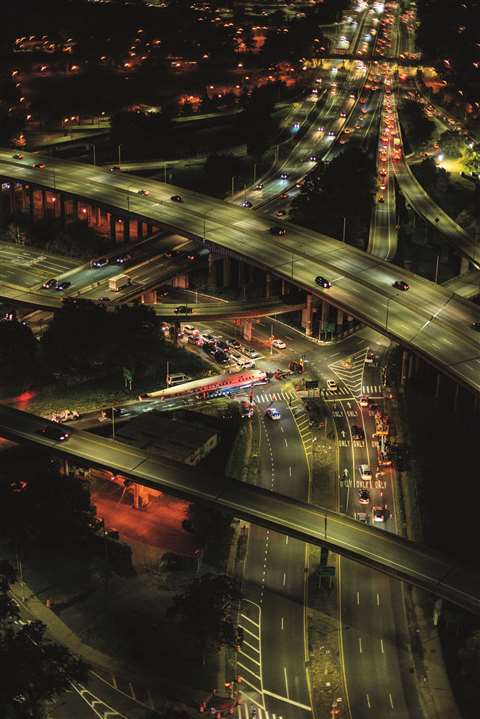 Worldwide Aircraft Recovery handled the journey to JFK Airport, where Connie was stored until its installation in April.

The plane’s journey to the airport has been a newsworthy event. The Lockheed Constellation L-1649A was restored at an airport hangar in Maine and trucked from Maine through New Hampshire, Massachusetts and New York before returning to JFK in late October 2019. In urban areas the plane traveled at night to avoid traffic and negotiate intersections and turns. Worldwide Aircraft Recovery disassembled the plane, loaded it onto trailers and handled the journey to the airport, where it was stored until the installation at the hotel in April.

Just before the plane was set to be lifted into place, the fuselage was trucked to Times Square in New York City as a part of the filming of a documentary titled “The Rebirth of the TWA Flight Center.”

In early April, the contractor began working with Bay Crane to rig the plane into the building. The first task for the Bay Crane team was to review the provided lift plans and related engineering documents. Three lifts would be required.

The wings were lifted in early April and the fuselage was lifted a few days later. The wings, weighing 10,000 pounds each, were hoisted using Bay Crane’s Liebherr 1220 with 127.9K of counterweight.

A rather elaborate rigging scheme involved two 35-foot endless slings rigged to the top of a 35-foot spreader bar. Below the spreader bar were four 10-foot slings to four 3-ton chain come-alongs hooked into four eye bolts on the wings.

“The first wing was set on wood stands at a pre-determined angle of approximately 7.7 degrees up from center to wingtip,” Gerosa said. “The come-alongs were adjusted to achieve this angle.”

The second wing was hoisted by the same means and bolted together with the first wing while in the hook.

“This process was the most difficult and took the longest time due to the number of bolts that needed to be made and the constant shifting of wings due to the wind,” said Gerosa.

The fuselage was hoisted using Bay Crane’s Liebherr 1300 rigged with 212K of counterweight. The fuselage weighed 17,800 pounds and was lifted at a radius of 97 feet. With rigging the lift utilized 80 percent of the crane’s capacity.

“Bay Crane utilized seven rigging beams to achieve this pick,” said Gerosa. “The top spreader bar was 43 feet long and ran lengthwise from cabin to the tail of the fuselage. It was attached to the crane by a 40-foot endless nylon sling at the cabin end and a 25-foot endless sling attached to a 10-ton snatch block with a 20-foot wire sling running through it into a 5-ton chainfall. This two-part system was good for 10 tons.”

It was needed to adjust the tilt of the spreader, if needed, and lengthen the sling angle to enable the crane block to hoist directly over the center of gravity. The side of upper rigging at the tail end needed to be approximately 47 feet, based on pre-lift weights and calculations. Below this spreader bar were two 15-foot endless slings on the cabin side into a 16-foot spreader and two 12-foot slings into a 10-foot spreader on the tail end. 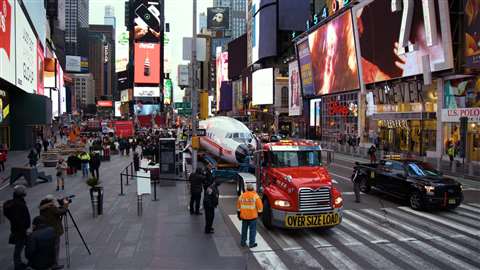 Before installation at the hotel, the fuselage was trucked to Times Square in New York City as a part of the filming of a documentary titled “The Rebirth of the TWA Flight Center.”

Below the last set of four spreader bars were eight 2-foot wide nylon straps attached directly to the left side bars and on the right hooked into four 5-ton chain falls.

“These last chainfalls were used to pick the fuselage level and to adjust the rotation of the fuselage when setting or attaching to the wings if necessary,” said Gerosa. “Both were needed due to the tapering shape of the fuselage to pick and rotating it to make the eight bolts mate with the wings.”

As complicated as the rigging plan was, Gerosa said all three lifts were successful and safely accomplished.

The Constellation with tail number N8083H came off Lockheed’s line in 1958. She joined the Jetstream fleet of TWA and flew her first passengers in May 1958.

The advent of the Boeing 707 forced Constellation propliners into retirement. Connie made her final passenger flight on December 20, 1960. Connie N8083H carried TWA cargo until April 1962, when she became an Alaskan bush plane shuttling supplies to Prudhoe Bay.

Connie N8083H was sold for $150 at a May 1979 auction. A year later, Airborne Enterprises restored and flew her until 1981. By 1983 Connie was modified to airdrop marijuana in South America. She got stuck in the mud with a damaged propeller at a remote landing field in Colombia. Outfitted with a new prop, she flew to San Pedro Sula, Honduras, where she was abandoned.

In June 1986, Connie was in Maine in bad shape. She was stripped of her flaps, engine and rudder to restore another Constellation airplane.

After purchasing the dilapidated Connie N8083H in early 2018, MCR/Morse Development partnered with Atlantic Models/Gogo Aviation to restore the plane. The painstaking work, including tracking down authentic parts, installing flooring and windows, and outfitting the cockpit with controls, was completed at Maine’s Auburn-Lewiston Airport. The airliner now serves as a retro cocktail lounge at the TWA Hotel at JFK International Airport.