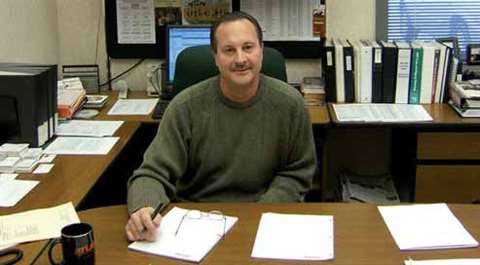 Incoming SC&amp;RA President Randy Goddard attended his first SC&amp;RA event when he was a teenager

SC&RA has earned a reputation among associations for accomplishing a great deal with a relatively small staff of about a dozen employees, including several who work on a part-time basis. A primary secret for SC&RA's success, honed over the 60 years of the association's existence, is a cadre of dedicated members.

To understand this phenomenon, look no further than Randy Goddard, executive vice president of Atlas Industrial Contractors, Ltd. of Columbus, OH. During the SC&RA Annual Conference, April 15-19, in Bonita Springs, FL, he will gain the ultimate recognition for his tireless efforts when the association inducts him as its new president, following terms as vice president and assistant treasurer.

Goddard's bloodline also makes him a most fitting choice to lead SC&RA. His grandfather, Kenneth J. Goddard, was one of the founders of Dobson Heavy Haul of Bay City, MI, in 1947. Less than a year later, Dobson became one of a handful of companies to found the organization that ultimately became SC&RA.

Randy's father, Lee Goddard, also played a role in that company through the 1960s. He remembers being taken by his father to a job at a paper mill where a 105-ton Yankee Dryer, a pressure vessel used in the production of tissue paper, was being unloaded from a barge.

“I was 12, and he wanted to show me how tough the job was,” says Goddard. “The minute I saw those two 100-ton cranes working hard, I knew I wanted to follow my father's footsteps. He really wanted to persuade me to go to college and pursue a different career, but instead he solidified my desire to work in this industry.”

As a sophomore in high school, he began working at Dobson, where he swept the floor and changed the oil in trucks.

In 1970, Lee Goddard, then vice president of Dobson, was selected as chairman of the Crane & Rigging Section of the Heavy Specialized Carriers Conference (HSCC) of the American Trucking Associations. The HSCC was the forerunner of SC&RA.

Later that year, Lee Goddard started his own company. Still in high school, Randy continued working in the industry for his father. In 1971, he became a member of International Union of Operating Engineers, and he attended his first HSCC event.

However, the Goddards' involvement in HSCC lessened as the company struggled for survival along with the regional economy during the 1970s. While working at Lee Goddard, Inc. in 1977, he made the transition from the operating engineers to the ironworkers.

He then moved over to Bechtel Power Corp., where he was in charge of installing reactors and steam generators at the nuclear site in Midland, MI. At that time, he was the company's youngest rigging superintendent.

After several years at Bechtel, he left in 1982 to start a dredging company with his father. That company focused much of its efforts on dredging slips for Polaris submarines at the naval base in Charleston, SC.

Having successfully completed that dredging project, he moved back into the crane and rigging industry with a Florida company, which was not an SC&RA member, from 1985 to 1987. Chip Belding, who was the SC&RA 1980-81 chairman, then recruited him as a project manager for the Belding Corporation based in West Chicago, IL from 1987 to 1990.

In 1990, Goddard accepted an offer from Peter Taub, then president of Atlas Industrial Contractors, to join his company. The company embarked on a vigorous program of expansion, building on its recent successes in moving, rigging, erecting and installing industrial machinery for Honda of America's move into central Ohio.

“Our company really started to grow from a small, regional contractor to, literally, the go-to contractor for a number of Fortune 500 companies after we gained a reputation for our equipment installation expertise and our heavy rigging work,” he says.

That reputation received a significant boost in 1997, when Atlas won an SC&RA Rigging Job of the Year for a project at U.S. Steel's newly completed Gary Works Energy Facility. Atlas lifted two components of the 165-megawatt generating station, each weighing over 125 tons, up and over a 35-foot tall turbine pedestal in a single lift – with only an inch clearance on either side of the larger of the two components.

The components were then transferred to their final locations along elevated tracks, using a gantry system as a rolling platform, down the length of the pedestal and onto their final locations. The lift involved the use of two lift towers, rated at 100-tons capacity, and 800-ton capacity hydraulic gantries. The entire project was performed on schedule, with in budget and without incident.

The safety aspect of all jobs is particularly important at Atlas, and the company has been eager to contribute to industry-wide safety improvements. Goddard was an active participant in the SC&RA Crane & Rigging Safety Committee for a number of years. When SC&RA reformulated that committee as the Crane & Rigging Safety Education & Training Committee in 1998, he became its first chairman, a position he held for the next nine years.

“Together, with the help of Crane & Rigging Group Vice President Beth O'Quinn, we shook up that committee,” he says. “We brought in a broad spectrum of experts with a commitment to safety, such as safety professionals, members, insurance providers, equipment manufacturers, and engineers.”

He points out that the committee continues to be well rounded. Goddard takes special pride in the committee's Safety First! A Team effort video series, produced in cooperation with the Construction Safety Council. To date, SC&RA has released three videos in the series in DVD and VHS format. Each video includes separate training sessions and printed supervisor hints on safety issues of importance to SC&RA members.

“The minute I saw those two 100-ton cranes working hard, I knew I wanted to follow my father's footsteps. He really wanted to persuade me to go to college and pursue a different career, but instead he solidified my desire to work in this industry.”

Additionally, he served as chairman of the task force that produced SC&RA's Recommended Practices for Telescopic Hydraulic Gantry Systems in 2004. Accompanying the 24-page manual is a video (DVD or VHS). The on-air personality capably leading viewers through the intricacies of the systems is none other than Randy Goddard.

He says his company's relationships with top-quality companies that insist on safe operations has helped guide his efforts with in SC&RA.

“Companies like General Motors and other high-value customers continue to raise the bar for our safety performance, and the SC&RA Safety Education and Training Committee helps our members achieve those high standards,” he notes.

Similarly, SC&RA stands to benefit from his company's relationships with unions that he characterizes as among the best in the industry.

“It has been a plus for me to come up through the trades and understand the political ins and outs,” says Goddard. “I did live it. I know the jurisdictions and work assignments. I am able to reach all the way to the general presidents of several international unions on a first-name basis, and I'm also comfortable working with the local unions all across the country.”

Goddard continues a tradition began by Atlas Chairman Peter Taub, who had served on SC&RA's Crane & Rigging Group Labor Committee. Upon taking over last year as chairman of that committee, Goddard set out to restructure the group, much as he had worked to change the complexion of the Group's Safety Education and Training Committee.

“One of the initiatives we put forward was to ask the three international unions we work with – the Ironworkers International, the United Brotherhood of Carpenters, and the International Union of Operating Engineers – to sit on our Labor Committee,” he points out. “We've always said we wanted more union involvement with our association's Labor Committee. If we are able to work in closer participation with these unions, we can become a more effective group.”

In addition to serving as chairman of the Crane & Rigging Group's Safety Education and Training Committee, Labor Committee and Telescopic Hydraulic Gantry System Task Force, he was the chair of the entire group in 2000-01. He also has helped plan the annual Crane & Rigging Workshops for a number of years, presented sessions at the events, moderated panels and served on the Rigging Job of the Year judging panel in years when his company did not submit an entry.

His company won a second Rigging Job of the Year in 2004 for a project that saved client American Electric Power in Conesville, OH, weeks of downtime and hundreds of thousands of dollars a day. In this case, Atlas ingenuity enabled a massive generator to be rebuilt onsite by using its Tower Lifting System for its client, National Electric Coil. Otherwise, the repair would have required complete removal of the generator. The project was completed on schedule, with in budget and without incident.

“We've only entered the competition seven times,” says Goddard. “A job has to meet our own strict criteria before we consider entering.”

Although the awards certainly have been valuable to Atlas, the company also gains in other significant ways from SC&RA involvement.

“Networking is one of the prime benefits of the association,” he says. “It has allowed Atlas to grow into areas where we never would have ventured otherwise.”

For example, during the Spouses Tour at the 1996 Crane & Rigging Workshop in San Francisco, his wife Carol struck up a conversation with spouses from a Canadian company, Process Group, Inc., based in Ontario. “She came back and told me how their company did the same things Atlas does,” he recalls. “We met with them for drinks and saw that we did have a lot in common. We formed a joint venture that allowed both of our companies to serve automotive and cement industries on either side of the border. We have foreign headquarters in each other's building.”

Additionally, Atlas has worked in Ireland and Great Britain and is pursuing projects in Russia. All of this work is in partnership with SC&RA member companies.

In the US, Atlas relies on SC&RA members for relationships as much as possible. Often, Goddard gains both business partners and very close personal friends.

Solid relationships with SC&RA members throughout the world aside, Goddard is confident of meeting his company's high standards regardless of the location of the jobsite.

“The thing that helps us extend our reach is our willingness to go to the customer's location with enough key Atlas people to get the job done,” he says. “We have a very deep staff that has allowed us to cultivate and keep some very reliable customers. This is the case whether they're moving small machinery or thousands of tons of equipment. The loyalty and pride that our employees have are among the tops in the industry.”

It seems inevitable that SC&RA also will benefit in some ways from the philosophies behind “the Atlas Touch” when Randy Goddard becomes the association's president.