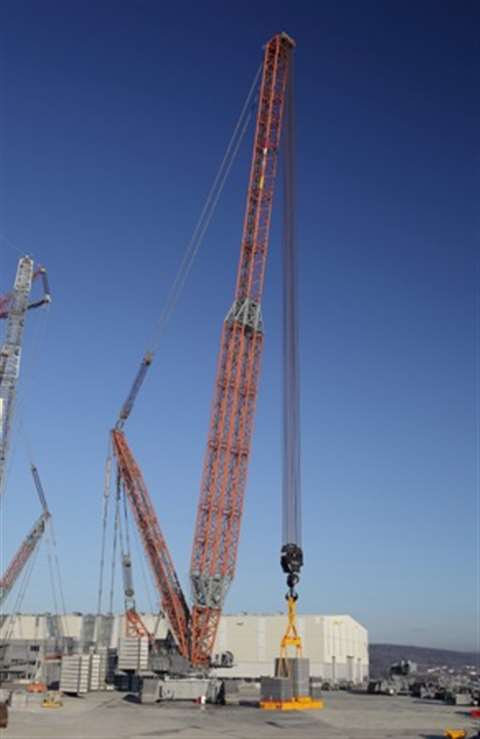 Liebherr is testing its Power Boom system on the LR 13000

Liebherr has been testing its new PowerBoom on its 3,000 metric ton LR 13000 crawler crane. The company said over the next few weeks the P-boom will undergo tests in the most widely differing configurations.

With the PowerBoom, the lattice elements in the lower area are mounted parallel to one another, while at the top the double boom is merged together to form one single boom. The lifting power of the crane can be substantially increased thanks to a simple mechanical supplementary system making use of standard lattice components, the company said. This applies to the main boom and the luffing jib, because the P-boom causes the torsion torque moment to be substantially increased. This widens the scope of application a great deal, and the PowerBoom raises the crane into the next higher lifting capacity class, Liebherr said.

The PowerBoom was already being taken into account in terms of design as early as when the LR 13000 was under development. This meant that the crane could be arranged right from the start to take on the new system. The increases of lifting capacities of the luffing jib on the LR 13000 result in a doubled effect, on the one hand from the increased torsion torque moment of the PowerBoom itself, and also from the use of particularly strong lattice elements. For the P-boom, in the parallel area the lattice elements from the standard luffing jib are used. The powerful main boom elements, which then become free, can accordingly be fitted as a particularly heavy-duty luffing jib.

Liebherr said the development of the P-boom system is a milestone in the lattice-boom crane sector.