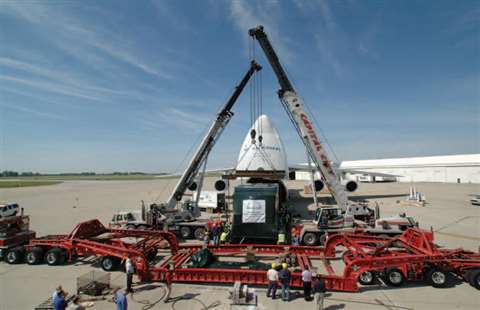 It was a matter of tons and inches for this high profile haul, lift, rotate, load and transport project. Photojournalists Dan and Gini McKain report

Gracefully and with skilled precision, the job required expert lifting and twirling. No, we're not talking about an Olympic ice dancing routine. Rather, the task was to very carefully and precisely load a single piece, mega-ton shipment into a massive Ukrainian aircraft. T e plane was not just any old cargo jet, rather it was an Antonov AN 124-100, one of the largest commercial cargo carrying aircraft in the world today.

The plane would be used to transport the first of three weighty gas turbines that were builThat the Rolls-Royce Energy Systems, Inc. factory in Mount Vernon, OH. T e final destination for the turbines was Utapao, Tailand.

Capital City Crane Rental of Columbus, OH, supplied the operators and cranes used for the job. T e machines selected for the project were a Link-Belt HTC-8690 and an HTC-867OLB. T e HTC-8690, with a 140 foot main boom, and the HTC-8670LB, with a 127 foot main boom, were dispatched to the Rickenbacker International Airfield in Columbus for the beginning of the odyssey.

After being set up and appropriately rigged, the cranes were positioned so that they could offload the 53 ton gas turbine package from its specialized transporter, turn it 90 degrees while holding it in the air, and then lower it onto the specially designed conveyor leading into the waiting AN 124-100's cargo deck.

The two most important factors in loading the gas turbine on the plane were in moving the load from the transporter to the conveyor and then from that point into the aircraft, according to Gerald Hess, PFF, executive vice president and onsite project manager for Albacor Shipping, based in Toronto. Hess says the logistics and precise planning of this international transport were quite involved, to say the least.

The biggest issue was the extreme weight of the load and the exceptionally close tolerances to fit it into the aircraft, according to Vladimir Vyshemirsky, project load manager for Volga-Dnepr UK Ltd, the owner and operator of the aircraft. Proper load weight and balance in the aircraft was also critical for safe flight.

Capital City owner and president Chet Gibson was on hand to watch the project unfold, encouraging his operators before they attempted the monumental task. The lift and load was designed so that Larry Cains would operate the new 90 ton capacity HTC-8690, lifting the heavier part of the turbine load of 67,000 pounds at a 27 foot radius. The boom angle was generally 60 degrees with a 64 foot boom extension.

Pat McMahon, who operated the 70 ton capacity HTC-8670LB, lifted the lighter end with a load of 33,900 pounds at a 26 foot radius. Once they lifted the load it had to be “twirled” 90 degrees in the air to fit on the specially designed conveyor system. After the turn, the crane's boom angle was about 69 degrees with a 60 foot boom extension. All went as planned and the giant aircraft left Columbus on schedule.

Getting the 53 ton turbine from the Rolls Royce factory in Mount Vernon to the Columbus airport about 100 miles away was a challenging transport as well. Using a series of gantries, the turbine was loaded from the factory floor to the heavy haul transporter by Consolidated Machinery Movers. Diamond Heavy Haul of Shandon, OH used a combination Peterbuilt tractor and Diamond trailer to haul the turbine to the airport.

To make the four-hour trip, the company used a 2005 Diamondbuilt,118 foot long, 11-axle 42-tire perimeter frame trailer, according to Diamond´s operations manager Rick de Remer. The steerable trailer is designed with hydraulic lifts, which enables the load to be dropped down to stay within the state-mandated 15 foot 6 inch height limit. The trailer is expandable to accommodate loads up to 16 feet wide. The turbine was 14 feet high by 14 feet wide. T e gross weight, including the turbine, was scaled and permitted for 200,000 pounds.

Diamond got clearances to make the haul with a daylight, over-the-road permit from the Ohio Department of Transportation. Only a very short section of the journey involved interstate highways. T e main challenge, according to de Remer, was a major railroad crossing on Route 310 that had to be closely coordinated with the railroad. Special flagmen were required to be on hand during the crossing. Two state police patrols from Mt. Gilead, OH and two private escort vehicles were also involved in the transport.

Gibson founded Capital Crane Rental in 1993 after buying the crane division of George Igel Co., where he had worked for 30 years. Most of Igel s operators stayed with Gibson and his new company, which today has 50 cranes in its rental fleet ranging in capacity from 8.5 to 550 tons.

Operators Cains and McMahon are long-time employees of Igel and Capital City with more than 48 years of experience between them. Cains' father and grandfather worked for Gibson, as well. Gibson said it was the dedication and experience of Cain and McMahon that made them the ideal operators for such a complicated lift.