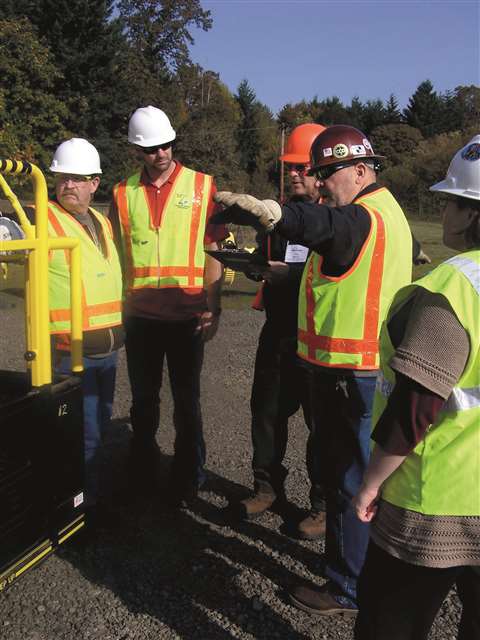 The lift director is an important individual in the safety chain of command.

With countless positions necessary to keep a job-site up and running, it is crucial to have a member of the team who is be able to lead the planning and execution of the lifting tasks at hand. This being said, there is not only an increasing interest in Lift Director Certification, but also a bonafide need that’s been made more apparent through the years. According to Craig Epperson, president and CEO of Crane Inspection & Certification Bureau, employers are now understanding more clearly that a safe lift begins with proper planning by a qualified Lift Director.

“If all the key components necessary for the safe execution of a lift are not in place at the outset, it may be too late to fix a potentially disastrous problem in the field,” said Epperson. “Secondly, employers are understanding more clearly that a competent and qualified person that is tasked to direct all lifts lowers the accident rate which leads directly to cost savings through reduced damage to materials and products lifted, and reductions in personnel injuries. The mitigation of risk associated with lifts directly correlates to the level of expertise of each employee that is involved in the lift. Having a third-party assessment is essential when determining that the person designated to direct any lifting operations has been evaluated as to their knowledge and ability to perform these tasks competently. Furthermore, organizations have realized that having an NCCCO Certified Lift Director as part of their team has also resulted in winning more bids on crane and rigging projects and also lowers their insurance premiums. Those already certified as operators, riggers and signal persons are seeing the need and are adding lift director certification to their credentials.”

Semantics issue
However, similar positions to that of a lift director have been around for quite some time, but it was classified under a different name. For example, field superintendent, crane foreman and rigging engineer all served as substitutes. Mike Parnell, technical director and CEO of Industrial Training International (ITI) referred to Howard Shapiro, author of Crane and Derricks and Don Dickie, author of Mobile Cranes.

“Both authors pushed for the formal recognition of persons directly involved in load handling activities,” said Parnell. “A product of Howard and Don’s efforts was the introduction of ‘Lift Director’ in ASME B30.5 – Mobile and Locomotive Cranes in 2007. Introduced in the B30.5-2007 revision were five key roles along with a listing of responsibilities namely: site supervisor, lift director, crane user, crane operator and crane owner, that closely resembled those written about by Shapiro and Dickie.”

In the past, lift directors were often crane operators or the lead person for a rigging crew who assumed the responsibility, but were not given the authority to take corrective actions. Epperson said that ASME B.30.5 recommends a lift director and lift planning on all crane and rigging projects.

"While the crane operator is the important individual in respect to the safe operation of a crane, that’s still only one person, one component in the whole safety chain of personnel who have safety responsibilities,” said Graham Brent, chief executive officer of the National Commission for the Certification of Crane Operators (NCCO). “It doesn’t matter how well you operate the crane if it hasn’t been set up correctly, if the radius of the crane hasn’t been accommodated, and the like. Then you’re going to be exposed to risk. I think it made perfect sense to the crane owners.”

While each role in the operation serves an important purpose, an OSHA compliance directive was also one of the main motivators to put this necessary piece into the training and qualifications that all employers have to comply with.

“OSHA certainly grabbed ahold of the concept that a lift director is important to operations, when they inserted the requirement for a lift director to oversee load handling activities involving multiple cranes (29CFR1926.1432),” said Parnell. “The call for using qualified and competent personnel in load handling activities is also outlined in the 2014 release of ASME P30.1 Lift Planning. In this safety guideline, the lift director implements the lift plan, having the authority to start, stop and re-start an event as required, while overseeing the people and procedures associated with the activity. Ultimately, we are seeing hundreds of companies and organizations responding positively to the OSHA requirement and the ASME guidelines.”

Increases trust
This certification not only increases trust at sites but also according to the NCCCO it serves as an assurance of a lift director’s abilities and personal status/personal qualification, improves positioning in a competitive industry, reduces the risk of loss, improves safety records, enhances the public image of the crane industry and aids in avoiding OSHA citations.

Now who exactly can qualify for this certification? Eligibility for certification requires the applicant be at least 18 years of age, meet medical requirements, pass the written examinations, comply with NCCCO’s Substance Abuse Policy and comply with NCCCO’s Code of Ethics. Written and practical exams are also a requirement to secure the position, and afterwards certification will remain valid for the next five years. But according to Parnell, from a practical standpoint, a lift director also needs to have competency in at least three areas.

While certain requirements are determined based upon the individual lifts that are necessary for their specific industry, there are still plenty of consistencies when it comes to what kinds of responsibilities lift directors must be able to handle as a part of the leadership position. According to Epperson, the lift director is one of the five people that are responsible for every lift and should therefore have a total understanding of crane and lift planning to include OSHA regulations and best practices within ASME and corporate standards.

Not just big lifts
There is also a common misconception associated with lift directors and that their need is singularly devoted to critical, huge lifts. However, there is not a definitive list of what a critical lift may consist of and lacks importance in comparison to the actual planning prior to any lift.

“The larger lifts, using larger cranes, lifting larger loads generally tend to be pretty well engineered and are planned,” said Brent. “For the most part, those are the lifts where you find the most accidents. But sometimes it’s those lifts where somebody says just run in here and move this pipe, or lift this air-conditioner onto a roof. It may seem like a pretty straight forward lift, but often times it’s those lifts that aren’t planned at all that are the ones where the accidents occur. But there’s no question that the land and the lift still needs to be planned by somebody, regardless of how small the load is or how routine it appears to be.”

In some cases, when a critical or multiple crane lift is involved, the responsibility does not fall only in the hands of the lift director. He or she will likely work with a group of specialists who can contribute to the lift plan in a variety of different ways.

“These specialists may include equipment operators, geotechnical experts, a structural engineer, rigging providers, site safety personnel, rigging providers, transporters and the like,” said Parnell. “The lift director needs to ensure that all aspects of the load-handling activity are addressed during one or more pre-lift meetings and should not permit the activity to go forward until all operational elements have been evaluated and found to be suitable.”

The NCCCO strongly believes that because of peaked interest levels, this certification program is going to exceed their expectations 100 percent. Both employers and the actual training communities have been very quick in their responses to the new certification,” Brent said.

“Over the past several years, industries have increased the degree of their lift planning training significantly, and with each passing year, the demand for lift director and advanced below-the-hook training has increased,” said Epperson. “Many petrochemical and energy industries require a lift director from contractors performing lifts. These companies recognize the value in having highly competent and qualified NCCCO- Certified Lift Directors mitigate their risks, save their company money and diminish injuries and fatalities.”

As more employers are recognizing the need and benefits of having qualified lift directors throughout the industry, it is becoming more common for an employer to provide additional training for folks that they have targeted to become lift directors. Parnell said that in certain cases, a person will have strengths in crane and job planning, but may need more education in rigging, for example. The astute employers are selecting quality candidates for lift director, and they work to fill any gaps in knowledge or skills, before the person is asked to perform, he said.

It is quite easy to see just how valuable the positions of lift directors are growing to be. In a workforce where every single day brings on new challenges and adventures, certain leadership roles must not only be taken on but maintained in order to keep every detail running smoothly and safely.

“The concept of having lift directors in an organization has certainly taken hold in the last few years,” Parnell continued. “We see more companies developing crane and rigging procedure manuals that incorporate the five key individuals noted at the beginning of this article. Though most lift directors have additional responsibilities in a company, their attention to load handling is vital. As more employers implement the lift director approach to load handling, we should see fewer incidents. At the end of the day, we can lower risks related to load handling by having a more complete and capable workforce.”