A replacement pressurizer vessel for a Florida nuclear plant was set to arrive by ship from France and be discharged to a specialized dual-lane transporter. The timely arrival of the vessel was crucial to keeping the nuclear plant outage schedule. But due to scheduling problems, the best option was to use international air transport. 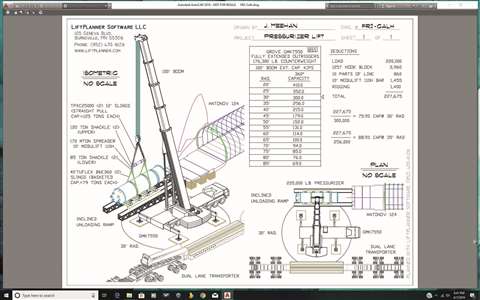 The diagram shows every aspect of the required lift. 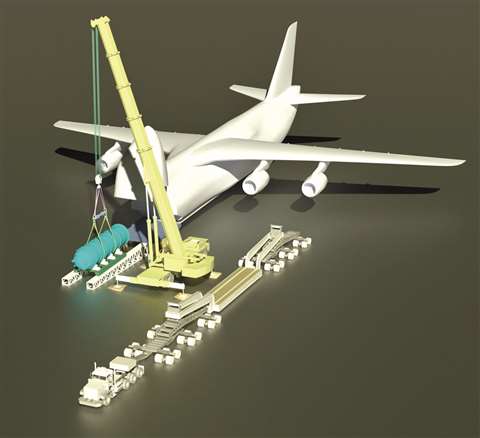 This image is a practical way to show the lift in a way that will be understood by all, not just the crane, plane and transport experts.

The Antonov owners supplied excellent planning documents, including several dimensioned views of the cargo areas and clearances (shown in the diagram as blue) as well as dimensions to plan for the plane “kneeling” forward three degrees to discharge the vessel with ramps (shown as purple), according to Meehan. These 2D outline views were directly imported into LiftPlanner Software. (Shown in the diagram above.)

Since so many large components would need to be situated in a congested space, a large all-terrain crane would be first choice. Fortunately, a Grove GMK7550 was available. The 30-foot lift radius helped to spread things out to create more room. Two LiftPlanner Software views were sufficient to convey the unloading – a larger 3D view on the left with the rigging and a plan view and percentage capacity calculations on the right. The 3D view shows the pressurizer after exiting the cargo hold and rigged with a pair of 40-foot long braided Tuflex round slings that have a basket capacity of 79 tons each. These basket hitches were trapped in position on either side of the center of gravity and would not scratch the vessel. They were connected to a Modulift 110H 10-foot spreader beam with 85-ton shackles. The top shackles on the beam were 120 tons and 12-foot endless TPXC25000 polyester round slings connected to the hook.

After the lift to the Trail King trailer takes place, cargo securement per the U.S. Department of Transportation would have to meet performance criteria. The same model of the pressurizer was placed on the deck to generate another diagram that showed and qualified cargo securement devices that could resist 0.8g in the forward direction, 0.5g in the rearward direction, 0.5g in both lateral directions and 0.3g upwards. Friction matting under the saddles would arrest 0.5g of acceleration in the forward, rearward and lateral directions. This leaves 0.3g or 220,000 pounds X 0.3 = 66,000 pounds that must be arrested forward. The chain binders used to attach to multiple restraint points are good for 10,000 pounds in straight pull and good for 7,070 pounds at 45 degrees or less due to angle. So, using 10 chain binders at 45 degrees or less is greater than 66,000 pounds and meets forward restraint criteria.

As all the lift and cargo securement details were being reviewed and approved and transport permits submitted, the same LiftPlanner Software model that was used to create the technical diagrams was used to generate a realistic photo-like image. A 3D model of the Antonov 124 was inserted into the environment and the 240-foot wingtip dimension was used to verify its scale.