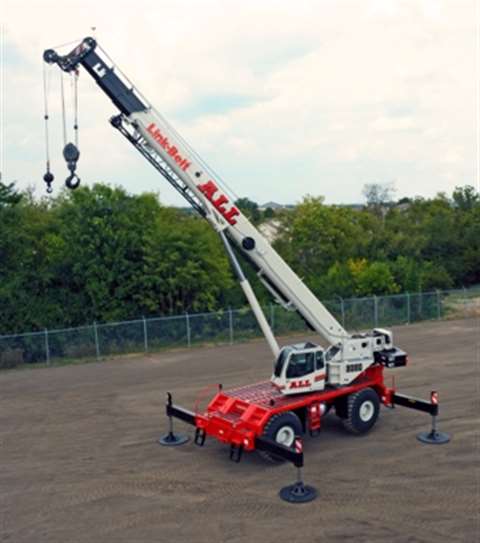 Link-Belt has not let a tepid economy hinder its ability to bring new cranes to the market. At its CraneFest ‘12 event for dealers and customers September 24-28 in Lexington, KY, the company showed off its all new 80-ton capacity RTC-8080 Series II rough terrain crane, its new 200-ton 248 HSL crawler and the upgraded 290 HSL crawler with an improved capacity from 230 tons to 250 tons.

To get the lowdown on Link-Belt’s newest models, I travelled to Lexington in late August to see what the Link-Belt team had been up to in terms of product development. This being a non-ConExpo and Bauma year, I figured they had one new crane up their sleeve, but I was surprised to learn that they were going to roll out three.

“CraneFest has been a Link-Belt tradition,” says Bill Stramer, vice president of sales and marketing. “Our goal is to touch the market every 18 months or so with new products and bring our customers and dealers to Lexington.”

One thing about the Link-Belt folks, they are passionate about their products, and this passion resonates with product managers Rick Curnutte and Pat Collins.

It seems like Curnutte, who manages telescopic crane products, could assemble the new RTC-8080 single-handedly. As he led me through the part of the factory in which rough terrain cranes are built, he filled me in on every nuance of the machine from the pre-painted components and plated hardware to the easy-to access engine.

“Link-Belt pioneered pre-paint,” he says. “It’s all in the details that set us apart. This crane is going to be a huge hit. The 3-piece bi-fold fly – it is the cat’s meow.”

“The new RTC-8080 Series II hits the mark between the RTC-8065 Series II and RTC-8090 Series II,” he says. “It has all of the cutting edge features that customers and operators expect in the Series II line.”

These new features include platform guardrails and a 41 to 127-foot, four section, full-power, formed boom. The crane incorporates Link-Belt’s Teflon wear pucks so the boom requires no grease. An available remote control boom flood light attached to the base section of the telescopic boom can be used as a spotlight in night-time settings. The boom, combined with removable, modular counterweights, makes the transport weight less than 90,000 pounds.

New to this crane are three on-board fly options that feature four manual offset positions of 2, 15, 30 and 45 degrees. These fly combinations provide up to an additional 64 feet of on-board reach.

One of the three on-board fly offerings is the 3-piece, bi-fold lattice fly, which has a 10-foot integrated fly. “It will have two bottom sheaves for mutli-part line reeving and have over 20 tons of capacity,” Curnutte says. “No more hauling a separate, specialized fly to the jobsite and then trying to figure out an easy way to install it – everything you need stows neatly on the crane.”

Link-Belt will provide lift procedures for two-line, one-load operation from the main boom head and from the 10-foot fly. With the full 64-foot on-board fly, the tip height of the crane is 199 feet.

The crane is powered by a 270 horsepower (201kW) Cummins QSB 6.7L with a Tier 4i/Stage IIIB emission compliant engine. A direct-mount power shift transmission brings the power to the wheels, and it has six forward and six reverse speeds. It has four steering modes: independent front, independent rear, all wheel, and diagonal. Winches deliver 18,500 pounds of line pull and 460 fpm of line speed.

The new crane also features many safety and access points for operators. “There are six points of access to the flat deck of the carrier frame, and the front and rear lower steps can be folded up to avoid damage when being transported,” he says. “We’ve added an access ladder into the upper sheet metal to allow access to an upper work platform with a folding guardrail. Swing-out doors give access to the entire engine compartment so it is easy to monitor routine checks of power-terrain components as well as fluid levels.”

Collins, product manager for Link-Belt’s lattice boom cranes, is fired up about the company’s latest advancement in crawler cranes, the 200-ton 248 HSL.

“It’s all new from the ground up,” says Collins. Drawing on the success of the 150-ton 238 HSL introduced at ConExpo in 2011, Collins says the new 248 HSL will cover such key markets as steel erection, bridge work, tilt wall work, foundation work and pile driving, a mainstay for Link-Belt cranes.

“The 238 HSL has not missed a beat in the market,” says Collins. “This mid-range crawler has been the undisputed champion in the 150-ton class. It’s been a flawless product and exceeded expectations, even in a down market. So the stage was set for a bigger and higher capacity crawler and the 248 HSL will fill that need.”

Truly impressed with the machine and its attributes, Collins says the new crane will “create new markets.”

“We moved through the structural testing and then on to the capacity testing,” he says. “This crane has been thoroughly tested. We had it on the test pad for several months. It passed with a 125 percent overload.”

Perfect for the general contractor and rental applications, Collins says the 248 HSL will prove its value quickly on the jobsite.

“It is loaded with all the features and the latest technology to satisfy everyone from the owner to the purchasing agent, and especially the operator,” he says.

Like the 238 HSL, customer input drove much of the new design for the 248 HSL, according to Collins.

The crane comes standard with folding upper guardrails and full-length right and left catwalks with grab handles. The crane operator is assisted by an on-board, high-resolution back up camera that will help monitor jobsite conditions. An outside audio/visual travel alarm system informs crew members on the ground.

“The HSL monitoring system provides the operator all critical lift information,” Collins says. “It is very intuitive and allows the operator to set swing and other control parameters creating virtual walls with audio and visual alarms.”

Link-Belt’s commitment to environmental protection has been a notable aspect of its entire manufacturing operation and its cranes, Collins says. During our plant tour, he pointed out the various conservation efforts throughout the plant. The company recently won an SC&RA Environmental Excellence award for these initiatives, and the ECO system is a major part of this effort.

Another interesting element of this system is that the operator-selectable auto-engine shutdown will turn the engine off after extended periods of inactivity, so long as critical operating criteria are met.

The 248HSL has a heavy duty lower with two carbody counterweights to provide a stable lifting base and long life with all sealed rollers, idlers and drive components, along with full contact 44 inch shoes, and a 25-inch clearance in its working configuration. Car body jacks come standard with a remote control for quick assembly with increased lowboy clearance both in width and height, Collins says.

Another important element of this crane is its ability to perform in tight spaces. “We wanted to assure a big crane lift package in a confined envelope,” Collins says. “We knew a tight, compact tail swing was important.”

Ease of transport was an important design consideration for Link-Belt. The modular upper counterweight removal system lowers the counterweights to the ground from the remote control station.

The main load with base and self-erection equipment weighs less than 87,000 pounds. Two 17,650-pound carbody weights help provide a strong lift chart in a compact package.

The 248 HSL has a main boom length of 55 to 285 feet and incorporates lifting sheaves in the boom base section for fast assembly and disassembly. A fixed jib ranges from 30 to 100 feet for a maximum tip height of 345 feet.

The operator’s cab was designed for comfort and functionability, Collins says. The crane comes standard with high-output air conditioning. Orders for the crane are being processed and the first units should ship in the fourth quarter
of 2012.

And finally, Link-Belt added one more upgrade. The 298 HSL crawler has received a boost in capacity, with its base rating increased from 230 tons to 250 tons.

This upgrade will take effect immediately and will be designated by a 250-ton capacity badge on all new models, Collins says.

“An upgrade kit will be available for existing 230-ton 298 HSL machines, which will include crane rating manuals and a software upgrade,” he says. “But no physical changes or components will be required.”