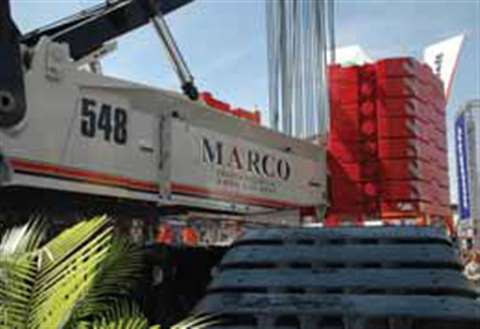 Link-Belt introduced its largest crane ever, the 550-ton 548 lattice boom crawler at ConExpo

Link-Belt played its cards close to the vest until ConExpo, launching a range of new cranes, including two series toppers.

The biggest surprise from the Lexington, KY-based company was the introduction of the 550-ton capacity 548 lattice boom crawler crane, which the company said offers easy transportability. Preliminary specifications place the 548's heavy-duty boom at 79 to 275 feet and the long-range boom at 138 to 354 feet. Luffer testing will soon be underway, according to the company, with a heavy-lift attachment with a supermast, to provide greater capacity, following in the future.

Also in iron for the first time was the HTC-3140LB, 140 ton hydraulic truck crane, which Link-Belt said is the largest truck crane in North America. The model has a 195.3 foot six-section boom with a maximum boom tip height of 204 feet. It has five boom modes and can telescope a load like a conventional full power boom.

Link-Belt said what makes the boom special is the optional fly attachments. A 10 foot heavy-lift fly has more than 20 tons of capacity and lift procedures for two load lines. This fly, integrated with optional three-piece, bi-fold lattice fly and three 18 foot extensions, allows this crane to reach 311 foot.

The company said its new 130 ton RTC-80130 Series II combines the attributes of the RTC-80100 Series II, 100-ton rough terrain with Link-Belt's latching boom technology “to create one of the strongest, most easily transported rough terrains in the industry.” The five-section, 162 foot formed boom has one double-acting, single-stage hydraulic cylinder with integrated holding valves.