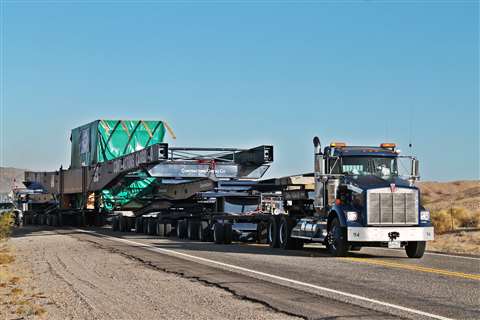 At the Port of San Diego the 661,000-pound STG was placed on a new 43-axle trailer designed by the engineering team at Contractors Cargo.

Contractors Cargo is adept at hauling huge power plant equipment through challenging terrains. Normal jobs involve transporting turbines, generators and STGs weighing upward of 750,000 pounds, as well as the components that go with this equipment.

But a recent job required the Contractors Cargo team to stretch its engineering and resources even more.

“What makes this a unique story is not only did we build a custom 43-axle trailer to haul one of the pieces, we also had to build roads to avoid bridges, obtain permits to go through Indian reservations and use railcars to cross into Mexico,” said Contractors Cargo’s Keoni Rabaino. “This project contains all the major facets of heavy haul and exemplifies the true process of pulling off a job in our industry.”

For handling at the Port of Long Beach, the two 562,000-pound generators and two 492,000-pound gas turbines were hauled on a 24-line, dual-lane Scheuerle transporter. An 800-ton gantry was used to lift them onto rail cars, and then they were loaded back on the dual-lane Scheuerle in Cochise, AZ to cross into Mexico to their destination in Agua Prieta, Sonora, Mexico.

There were more than 144 oversized and flatbed loads of components and accessory cargo along with the five main pieces.

But the 661,000 pound STG was the big focus. Offloaded at the Port of San Diego, it was cataloged as the port’s heaviest shipment in 10 years. It was loaded onto the custom-designed 43-axle transporter. The length of the haul was 362 feet with trucks and the gross weight was 1.228 million pounds.

“The 43-axle is one-of-a-kind, custom-made and in house-engineered,” said Rabaino. “It’s the biggest transporter Contractors Cargo has built in its 59-year history. The trailer was designed by our civil engineer, operations team as well as our CCC manufacturing shop.”

By late May the STG was on its way from San Diego into Arizona and then down into Mexico. The route was circuitous due to the weight of the piece and the roads on which it could travel. Roads had to be built where when bridges couldn’t handle the heavy weights.

“This involved almost one year of planning and route surveying to see the physical conditions of the roads we were planning on taking,” Rabaino said. “Once determined, more planning with local authorities and agencies had to occur.”

The route from the Port of Long Beach to the destination was 650 miles and took place from Feb. 27 until April 17, 2014. The last piece, the huge STG, left the Port of San Diego on May 6, 2014 and would travel about 700 miles until reaching the destination. Police escorts travelled continuously with the hauls.

“For both loads out of Long Beach and San Diego there were superintendents, drivers, pushers and road crewmen,” said Rabaino. “Not to mention that both had pilot cars, police escorts, civilian escorts and bucket trucks. At any given time there was a convoy of around 30 people. Approximately 25 permits were required as well as the cooperation of more than 50 country, state, federal and Mexican government agencies for all the loads.”