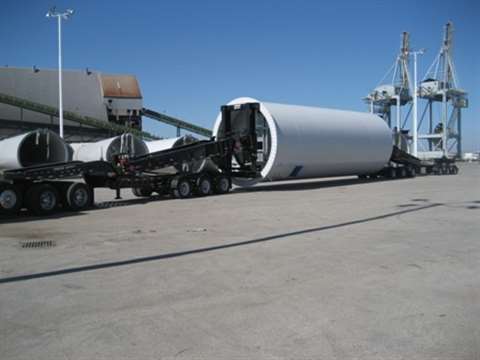 Wind power contractors expect the market to pick up in late 2010 in North America.

Before the economic downturn, transporting wind tower components offered a steady stream of revenue for many companies in the heavy haul sector. When will that stream began to flow again? Jeff Hampton reports.

Wind tower, nacelle and blade transporters have seen the same slowdown in business as crane operators, and they too are waiting to see how taller towers, longer blades and heavier nacelles might impact their business in the future.

"It's been kind of slow. There seems to be enough product on the ground," says Wesley Chandler, director of sales for Kalyn Siebert, based in Gatesville, TX. "There are no new orders, and there's a lot of inventory in the field. The perception is more optimism than pessimism, but there doesn't seem to be any catalyst for growth at the moment."

Chandler says that his company like most others is hearing that nacelles are getting heavier, and new technology will be needed to haul them. While they've heard too that towers will get taller, they're also hearing that larger towers might get split into smaller pieces, which would actually result in smaller loads.

"There's a lot of scuttlebutt, but nobody has seen anything yet," he says. "We're still in the dark and we'll have to wait and see how it all shakes out."

Trail King reports that its wind business is better than in 2009 but not nearly as brisk as 2008. "That was a bumper year for us," says Butch Odegaard, director of national accounts.

With talk of larger wind turbines, the company has rolled out blade trailers with a removable neck on the front beam that can be extended to handle longer blades. "Most of our blade trailers are being sold that way," says Odegaard.

Meanwhile, Trail King's 13-axle trailer set-ups will handle any length tower, and they're self-loading and unloading. Odegaard says that feature is beneficial for wind farms that need to position towers in a holding area when the ground is too wet or it's too windy for the transporting and erecting of towers. It's a relatively new design, he says, and Trail King is adding people at the manufacturing plant to produce them.

Permitting continues to be an issue with all heavy and oversize haulers, and the wind industry is not immune.

"Our nation is absolutely ignorant to the fact that it's a bit of a crippling problem," says Ray Mullen, owner of Mullen Crane and Transport. While some adjoining states have become more compatible - such as Idaho and Oregon; and Nevada, California and Arizona - a national standard still eludes, he continued.

"Even though SC&RA has lobbied for years for a universal permitting standard, I don't ever see a change for that," Mullen says.

Meanwhile, cargo loads are getting larger and larger. In Texas, which leads the nation in wind energy development, permits for "super heavy loads" - 250,000 pounds or more - are up significantly for all industries, says Carol Davis, director of TxDOT's Motor Carrier Division. Super heavy permits totaled 1,500 in 2009, up from just 120 in 2003. By early April of 2010, 400 permits had already been issued for super heavy loads.

Davis says shipping larger units is a trend in all manufacturing, not just in the wind industry. "There's a lot of risk involved with disassembling, shipping, and reassembling, so we're seeing more modularization," she says.

Permitting in Texas for super heavy loads such as nacelles can take six to eight weeks, with a route inspection required for anything over 200,000 pounds. While the state has 85,000 centerline miles of roads and more than 50,000 bridges, at any given time there may be as many as 2,000 restrictions due to construction and maintenance projects.

Davis says she understands the frustrations that heavy haulers for the wind industry have with permitting across state lines. As a member of both the Southern and the Western Association of State Highway and Transportation Officials - and specifically as chairman of WASHTO's Highway Transport Committee - she's been active in seeking solutions.

"We're only going to be as big as our most conservative state," she says of the regional efforts. For example, a super heavy load in Mississippi is only 120,000 pounds - half the size of what's allowed in Texas.

"That just makes our partnership with the carriers and shippers all the more important," she says. "We've really tried to reach out to the shipping community. We need them to be thinking about how they're going to move these loads in advance."

For their part, trailer manufacturers are working to ease the load with new technology - such as trailers that can carry two blades and that have electronic steering - but Ray Mullen says the manufacturers of wind energy components will also have to adapt as their equipment gets larger.

"We see two-piece turbine blades coming, and towers will have to be more segmented," he says. "Clipper Windpower wanted to build a bigger, better, faster turbine, and they're building it in pieces."

He says Chinese manufacturers are building 3 megawatt nacelles, and they'll be modular to conform to US transportation restraints. Also, a Spanish firm working in the Des Moines area is coming to the market with multi-section concrete towers that may be transported in as many as eight sections.

Mullen says the wind industry still holds promise in the short term, but he believes the business will change.

"As early as six to eight years from now, a lot of maintenance work will be needed," he says, "and at that time you'll see tower climbers, and I've even heard talk of using dirigibles - anything to cut down the costs of cranes."

Longer term, he believes the new focus of the Obama Administration on nuclear energy we'll shift attention away from wind energy.

Until then, companies like Mullen Crane and Transport are racing to make hay while the sun shines. Earlier this year the company formed a partnership with Des Moines-based Rasmussen Group to provide full-service wind farm transportation, site preparation and tower construction across Iowa and the Midwest.

"Rasmussen-Mullen is at the center point of one of the nation's windiest regions and best terrains for wind farms," says Mullen.