Looking back at the iconic Bauma trade show

After a delay and other challenges associated with the Covid-19 pandemic, Bauma 2022 will happen this month in Munich! 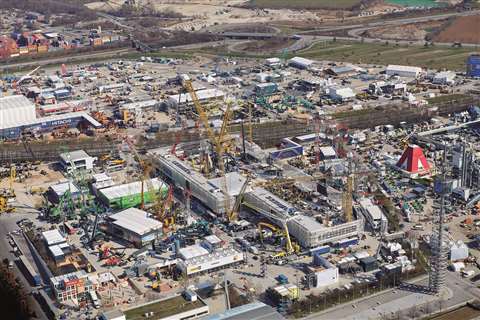 Product development will be front and center with new product launches a hallmark of the show.

A legendary event in the world of construction equipment, Bauma is the largest tradeshow in the world. In 2019, the show attracted a record 620,000 visitors. This year the show could eclipse that number, or attendance could be down because of a number of challenges caused by the global Covid-19 pandemic. The show is set for October 24-30 at the Messe München trade-fair center in Munich.

The very first Bauma was held in 1954 as part of the “Baumusterschau” at Theresienhöhe in Munich. It was a fully German exhibition with some 58 construction equipment manufacturers showing their products. In 1956, the trade show, dubbed “Bauma,” was held again, this time with twice as much exhibitor space and twice as many visitors. The second iteration of the show attracted 13 exhibitors from abroad.

In 1958, due to tremendous growth, the show was relocated to a former airport site known as Oberwiesenfeld. That year the show had 450 exhibitors.

Even though it will be held in October instead of April, Bauma is expected to be as impressive as ever.

According to Wikipedia, in 1967, “Bauma was transferred from private ownership to Messe München’s portfolio, and in 1969, the first Bauma was organized under the leadership of Messe München.” The show continued to grow and then it got another huge boost.

The Olympic Games were awarded to Munich, and the region became the largest construction site in Europe. Olympic Park was built at Oberwiesenfeld. Bauma returned to Theresienhöhe, where it remained for several decades. In 1998, the trade fair company moved from Theresienhöhe to Munich-Riem.

Cranes, rigging gear, specialized lifting equipment and specialized transportation vehicles are an impressive part of this global tradeshow. The skies over Bauma are filled with crane booms from almost every crane manufacturer in the world. 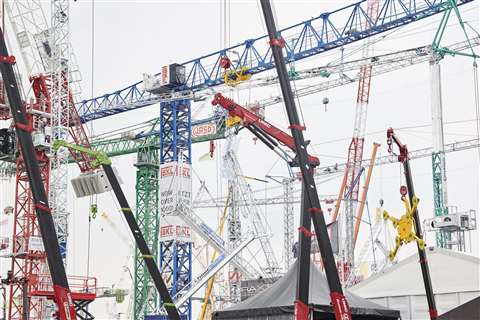 Bauma is usually held in April every three years, but this year the show was postponed until October 2022 due to the Covid-19 pandemic. By pushing the show to October, and due to other issues such as supply chain challenges, inflation and rising costs and the fact that ConExpo is just six months after Bauma, some OEMs made the decision to skip one show or the other. Several U.S. companies have pulled out of Bauma, most notably in the crane sector are smaller U.S.-centric manufacturers that do not have a huge global reach.

While the 2022 show will be at a different time and the exhibitor list is not the same as normal, the show is expected to continue as a legendary event in the construction equipment industry.