Lucy gets lift from Liebherr LTM 1080 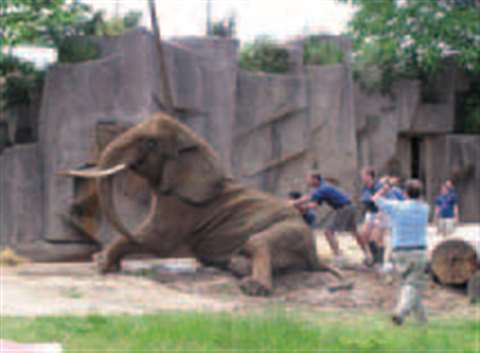 Picking up a 9,000 pound pachyderm can be a problematic process. Such was the case last month when Lucy, a 45-year-old elephant, stumbled and fell in her yard at the Milwaukee County Zoo in Wisconsin. Unable to lift herself up, Lucy's situation soon became an emergency.

But the zoo's staff had a protocol in place, quickly calling Dawes Rigging and Crane Rental to come out and help Lucy get back on her feet. Using a 90 ton capacity Liebherr LTM 1080 rigged with a sling furnished by the zoo, Dawes crane operator Dave Gierach saved Lucy's life, gently lifting the pachyderm to her feet in a matter of minutes. A very soft styled sling was placed under the elephant's limbs and she was gently lifted upwards and forward. Gierach was able to lift Lucy forward just enough so that some of her weight was lessened by the crane, allowing her to stand up on her rear legs alone. Lucy even appeared to know what to do, because just as she got to her feet, Gierach slacked the sling a bit, allowing the elephant to pull her leg out of it and walk free.

The zoo's spokesperson said that it took Lucy a few days to recover from her trauma, and within a week zoo physicians had given her a clean bill of health.