Renovation on the Merchants Bridge, an iconic 130-year-old bridge and key component of the region’s transportation infrastructure has been completed. Alongside Walsh Construction, Mammoet recently executed lifts for the historic rehabilitation project in St. Louis, MO. 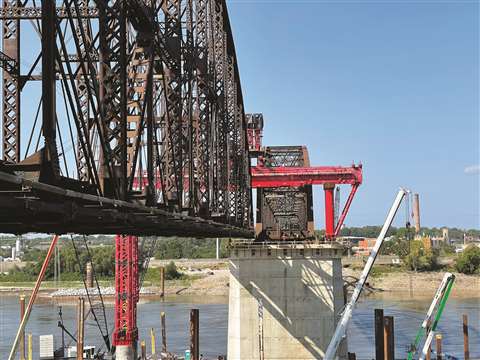 Mammoet’s technical solution entailed two large gantry systems assembled over the Mississippi River. Each new truss measured 520 feet in length and weighed 9,000,000 pounds and was floated by barge into position, raised and then placed.

Together, Walsh and Mammoet have rebuilt the bridge by removing and replacing all three of the bridge’s trusses as well as the east approach connecting St. Louis, MO and Venice, IL. Originally built in 1889, the rail bridge crossing is the oldest rail structure spanning the Mississippi River. The renovated bridge serves as crucial link between the Missouri and Illinois for both passengers and freight. Merchants Bridge will now accommodate the passage of two trains, essentially doubling capacity, which will result in an estimated $456 million increase in regional economic activity, according to the Terminal Railroad Association of St. Louis.

Mammoet’s technical solution entailed two large gantry systems assembled over the Mississippi River. Each new truss measured 520 feet in length and weighed 9,000,000 pounds. Each of the existing trusses weighed less than half as much at 3,959,502 pounds. Each of the newly constructed trusses were floated by barge into position, raised and then placed. 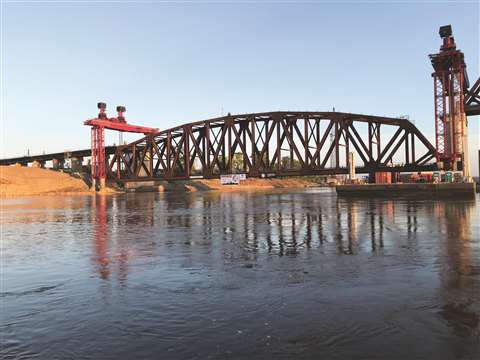 Walsh and Mammoet worked together to set the new bridge span in place.

Global collaboration was also centric to all aspects of planning and engineering. Mammoet enlisted a group of engineers from Holland to work on the project, and one main engineer from the states. In addition, the team had two project managers working on the bridge rehab for the majority of the time.

Mammoet’s global coverage also allowed it to import the right tools for the job easily – a few large beams from its fleet were shipped in from Singapore and The Netherlands. The beams were then reinforced to be able to resist the weight of the hefty load. Each gantry was equipped with a skid system on the gantry beam; thus, the bridge section could be picked up from the lift location and skidded to the installation position. The only difference between the two gantry setups was the type of gantry beams utilized, resulting in a slightly different skid setup on top. 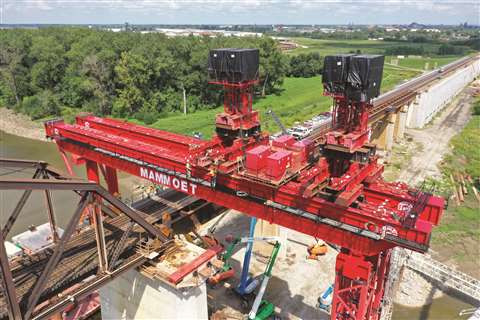 Mammoet’s intricate gantry system assured that both trusses could be floated into place.

The success of the rehab project also involved a team of heavy hitters and industry experts.

“It has been quite an accomplishment watching it all come full circle,” said Matt Boben, project manager, Mammoet USA South. “The project employed a great group of people which I enjoyed working alongside including Mammoet, Walsh and Genesis personnel as well as all parties in-between.” 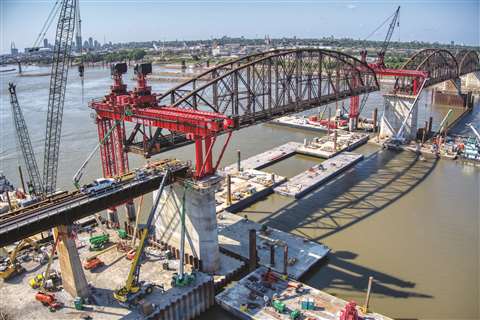 The renovated bridge is a crucial link between Missouri and Illinois for both people and freight. Photo: Walsh Construction and Trey Cambern Photography

The beams, depending on the type, weighed 135 tons and 160 tons. Walsh and Mammoet worked together for over a month to install both systems to make the lifts of the first span. The gantry systems were moved over to the other piers and reassembled to allow spans two and three to be lowered and reinstalled. The old truss bridge replacement was successfully completed with two separate gantry systems at each end of the bridge section. After the installation of the new bridge section, one of the two gantry systems was relocated to the next set of piers to remove and install the next bridge section until all three were completed.

The rehabilitation project will minimize necessary bridge maintenance in the future, restore rail service to both tracks across the bridge as well as forever change St. Louis’ 132-year-old skyline, the company said. Stimulating the region’s economy and futurizing the regional freight industry, Merchants Bridge will continue to maintain its role as a rail hub for the Midwest.