The Mammoet-Haisla Joint Venture has been awarded heavy lift and heavy haul contracts for an LNG Canada project in British Columbia, Canada.

Modules weighing more than 10,000 tonnes will be part of the LNG Canada project.

The award was made through the JGC-Fluor Joint Venture in Kitimat, British Columbia. The project will allow the export of Canadian natural gas to Asian markets. In doing so it would put Canada on the global map of LNG exporting countries and create a world-class liquefied natural gas (LNG) industry in Canada, Mammoet said.

The scope of work includes receiving all oversize equipment and modules at the Module Offloading Facility (MOF), transport to the project site and lifting onto the final foundations. In the next three years Mammoet-Haisla JV will be responsible for the horizontal and vertical movement of more than 350,000 tonnes of equipment. The heaviest loads will be more than 10,000 tonnes each.

January 2021 sees the start of phase one. In preparation for that, Mammoet-Haisla JV is offloading incoming pipe racks. 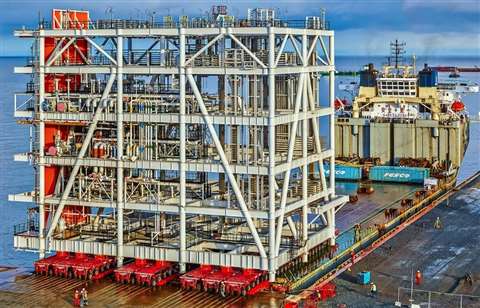