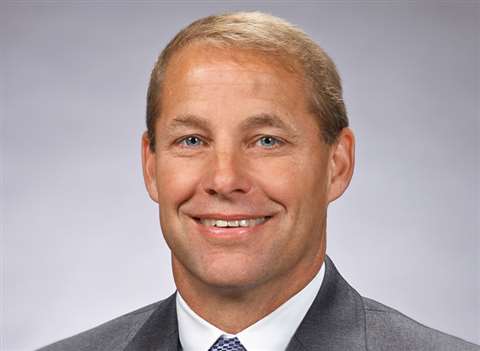 “Manitowoc has maintained its industry-leading positions in Cranes and Foodservice in spite of significant macro-economic headwinds and operational issues over the last 18 months,” said Roy Armes, Manitowoc's lead independent director.

“The Board of Directors, however, believe this is the right time for new leadership at the company. Ken’s deep knowledge of Manitowoc’s businesses, coupled with his robust financial and operational expertise, make him an excellent choice to lead the company’s efforts as we execute a search for our next chief executive officer.

"In his interim role, Ken will be focused on executing the company’s efforts to improve financial performance and executing the spin off of the Foodservice business, as well as implementing the restructuring initiatives we announced today. Our commitment to delivering superior quality, innovative products and unmatched customer support is unwavering as we further extend our leadership in the marketplace.”

Armes concluded, “On behalf of the Board of Directors, I want to thank Glen for his efforts and contributions to Manitowoc over the last 24 years. We wish him well in his future endeavors.”

Tellock' resignation came just after the company reported third-quarter 2015 sales of $863.5 million, a 12.5 percent decrease from $986.3 million in the third quarter of 2014. The company said approximately 40 percent of the decline was due to unfavorable foreign currancy impacts.

“While our third-quarter results for Foodservice showed solid improvement driven by our corrective actions, Cranes fell short of our expectations," Krueger said.

"Consistent with the worsening global demand environment impacting the industrial sector as a whole, our shortfall during the third quarter was largely the result of weakness in tower crane demand in Asia and the Middle East, coupled with broad-based softness in all-terrain cranes. In addition, we experienced significant delays in crawler crane shipments due to extended reliability testing and operational issues."

“In Foodservice, we saw trends experienced late in the second quarter drive margins back to 2013 levels during the third quarter, providing us with increased confidence that issues constraining margins in the recent past have been remedied," he continued. "However, we continue to execute our global manufacturing strategy and product rationalization initiatives to further improve profitability as we move forward. While we are very conscientious about the need to optimize our cost structure, we remain committed to innovation, product quality, and after-market support, which will enable us to maintain our leadership positions in both businesses and position them for continued growth and profitability.

“Given our results for the third quarter, we are taking significant actions in both segments to right-size the business that will result in approximately $30 million of restructuring charges in the fourth quarter. These actions are expected to generate savings of approximately $135 - $145 million over the next three years,” added Krueger.

Third-quarter 2015 net sales in Cranes were down 23.0 percent, to $438.2 million, versus $569.2 million in the third quarter of 2014. The decline was broad-based, particularly in the Middle East and Asia, which fell well short of our expectations, Manitowoc said. Slower than anticipated deliveries of VPC crawler cranes exacerbated the weakness, according to the press release.

“Continued global economic uncertainty, coupled with the devaluation of the Chinese yuan that negatively affected the rest of the Asian markets, weighed on end market demand in the third quarter,” Krueger said. “As we look to the remainder of 2015 and into 2016, we will focus on those aspects of the business we can control, which include executing on our operational efficiency initiatives and optimizing our cost structure, without sacrificing the innovation and quality for which Manitowoc is known.”

Krueger said this cycle of business has been different from any in recent memory, particularly with regard to customer order patterns. He said the Cranes segment will take aggressive actions to offset the decline in demand, including right-sizing the business, plant rationalizations, headcount reductions, and other cost optimization initiatives.

"These actions will likely result in an approximate $10 - $15 million restructuring charge in the fourth quarter, and savings of approximately $35 - $45 million over the next three years,” Krueger said.

In addition to being a member of the company’s Board of Directors since 2004, including four years as audit committee chair, Krueger has worked in finance and operations management. Krueger most recently served as chief operating officer at Bucyrus International, Inc., a leader in mining equipment manufacturing, before retiring in 2009. Prior to that he served as chief financial officer at A.O. Smith, a water technology company, and Rockwell Automation, a leader in industrial automation, from 2000-2005 and 1983-1999, respectively.