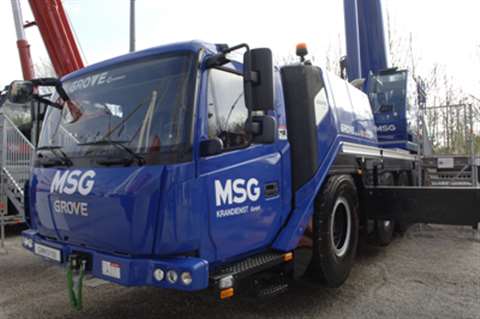 Maximum counterweight for the GMK5150 and GMK5150L is 45 tonnes, giving the cranes an overall load chart increase of 20 percent over the GMK5130-2, said Jens Ennen, senior vice president all terrain and truck mounted cranes at Manitowoc.

With a capacity of 11.6 tonnes with its boom fully extended to 60 m, the GMK5150L is ideal for tower crane assembly or other applications where strength at height is required, Ennen said.

Extending both cranes reach is an 18 m bi-fold swing-away jib which can be extended with an 8 m boom extension and an 8 m jib extension for a total jib length of 34 m. The jib also offers an offset of 50°.

Ennen said, “These cranes will maximize return on investment for our customers through their superior reliability, ease of transportation and user friendliness.”

The GMK5150L and GMK5150 are powered by a single engine, reducing their overall weight and allowing them to carry more counterweight. The cranes are powered by a Tier IV Final/Euromot 4 Mercedes-Benz OM471LA six cylinder diesel engine with a 390 kW rating at 1,700 rpm and a maximum torque rating of 2,460 Nm at 1,300 rpm.

The new ATs have Manitowoc’s Crane Control System (CCS) and the intuitive Boom Configurator Mode which makes it quick and easy to select the optimum boom position for a specific lift, Ennen said.