When it comes to plant tours, Manitowoc’s Pat Cassner is hands down the best tour guide ever. Cassner has worked for Manitowoc Grove for 47 years, starting when he was just 17 years old, and he knows every nook and cranny of the 312-acre, 1.3 million-square-foot facility. He was the perfect person to lead the monumental effort to move the company’s crawler crane manufacturing from Manitowoc, WI to Shady Grove, PA. 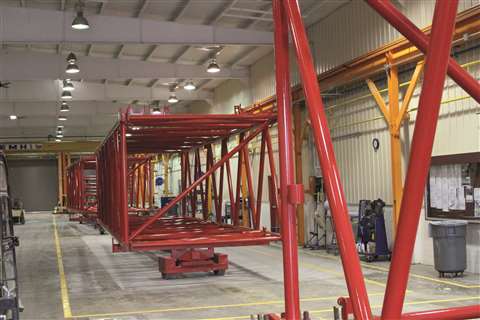 A new paint booth was constructed to accommodate the larger crawler crane components. The new paint system includes a flash tunnel that bakes the paint finish to 150 degrees F.

“It was a huge undertaking,” said Cassner, who is vice president of manufacturing operations for the Americas. “But I’m very proud of what we’ve accomplished in a short amount of time. We have an operation that is leaner, more organized and flows much better.”

Plus, Cassner really loves what he does.

Manitowoc announced its intention to relocate its crawler manufacturing to Shady Grove in August of 2016, and by May 2017, for the most part, the task had been completed. While the primary task was adding a crawler production line, the bigger picture mission was to transform the Grove plant into a leaner, more productive facility with the ability to ramp up quickly when the market makes a jump.

The end goal was to produce cranes more cost effectively, faster and above all at a higher quality, Cassner said. 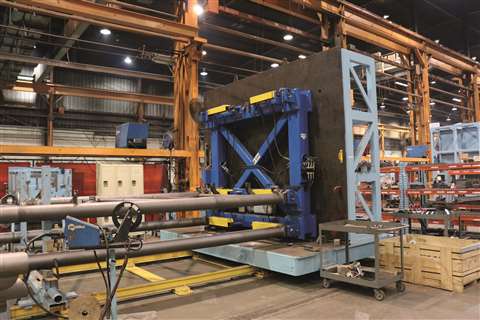 Boom components are tested for strength and straightness.

“We have this plant organized now so that we can produce a rough terrain crane every 3.5 hours,” said Cassner. “That would be when we are at full capacity working two shifts.”

The investment totaled close to $13 million and involved everything from adding a new paint booth, to making doorways taller and wider to accommodate crawlers, to leading 21,500 hours of welder training to assure workers can weld lattice boom and other crawler components to the highest standard.

The new paint booth will accommodate the wider and taller crawler components, including the MLC 650. The paint booth includes a flash tunnel that bakes the paint finish to 150 degrees F.

Another huge project was building a crawler crane test pad, which required a 12-foot base of concrete.

Disassembling, hauling and reassembling the crawler tooling, robotics, welding and pressing equipment required 1,200 truckloads. Making room for crawler production was a challenge, but Cassner said they were able to reclaim space that was not being used effectively, and they even found a lot of space they didn’t know existed. 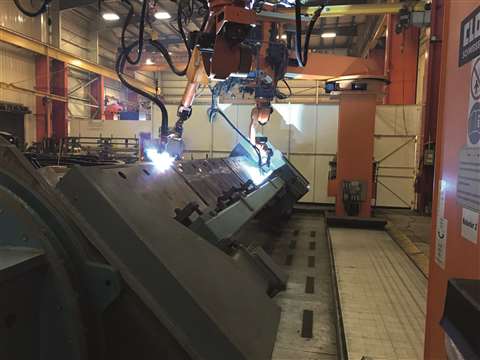 Robotic welding comprises a large part of the rough terrain crane production process.Up to 80 percent of the weldments on RTs are performed by state-of-the-art robotic welding machines.

The Grove facility has 30 structures including five main buildings. The flow of the plant was reimagined and then reorganized so that materials and components could be fed into the facility as they are needed and in a logical fashion. The manufacturing lines were updated with new lighting and fresh paint, and worker safety was emphasized in every element of the process.

“The restructuring of the plant allowed us to handle materials and processes much more efficiently and cost effectively, improving the cycle time,” said Cassner.

What I took away from my day touring the Shady Grove plant was a feeling of optimism and excitement from the employees, from those assembling the cranes to those greeting customers in the lobby. After a few years of maneuvering through a down market and a major reorganization, Manitowoc Cranes has restructured, retooled and appears to be well poised for growth.