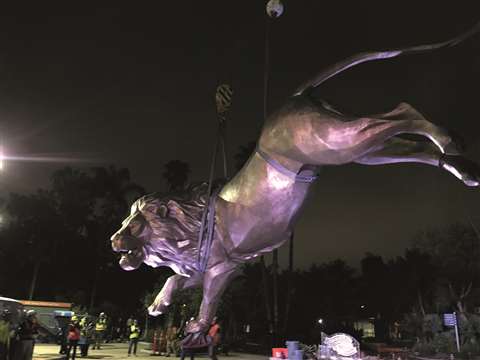 Visitors to the world-renowned San Diego Zoo are greeted by a beautiful bronze sculpture that depicts the most well-known member of the Animal Kingdom. In a pounce stance, mane flowing and teeth bared, one can almost hear the mighty roar of this gorgeous animal. A perfect combination of art and modern engineering, the new monument celebrates the zoo’s history and the mighty lion species.

Marco Crane & Rigging was recently tasked with the lift and installation of the largest cantilever bronze animal statue in the world, according to Artworks Foundry in Berkeley, CA. Standing on one paw some 27 feet off the ground, nearly 13 feet wide and weighing 20,000 pounds, the statue pays tribute to a real lion named Rex who inspired the San Diego Zoo back in 1916.

This unique and ferocious project began with the art piece being trucked down from the Bay Area using a stretch, drop deck, five-axle trailer.

“It was sculpted in Berkeley, made in a foundry of over 200 individual pieces put together to make the sculpture,” said Sam Meyer, vice president, Marco Crane & Rigging. “They assembled it inside of the warehouse, and then they used two overhead cranes to pick it up and place it into the cradle. So, when it came to us, it was laying on its side. We had to basically pick it up and render it in the air and get the pitch and angles proper to get it touched down onto the bolt pattern.”

The bronze lion known as Rex weighed close to 20,000 pounds and was installed in a pounce position on one foot.

The Marco Crane & Rigging team utilized two Grove all terrain cranes, both configured to lift 175 tons. The Grove GMK 5275 utilized 68,300 pounds of counterweight and the Grove GMK 6300-B used 48,500 pounds.

“They made a big footing of concrete under the ground, and the lion had a base plate on the paw that touched down, and almost looked like an outrigger pad for the crane,” said Meyer. “It had holes and was bolted onto a big concrete footing. It was a challenge to get it touched down.”

The smaller crane was utilized for holding the heavier part of the statue because the center of gravity tended to be the front shoulders of the lion. With both cranes configured to be the equivalent of 175-tons, the radius was between 70 and 80 feet depending on what part of the lift they were at. The GMK 5275 was rigged with 132.4 feet of boom and the GMK 6300-B was rigged with 130 feet of boom. For ground stabilization, the Marco team put down plywood and wood mats made from oak timbers. In addition, the team used four, 40-foot endless poly round swings.

“No one’s really ever handled something like this before, “Meyer said. “It was a unique sculpture, and they didn’t design it to be lifted by a crane, they designed it to be aesthetically pleasing. So, we had to figure out how to grab it and rig it.” 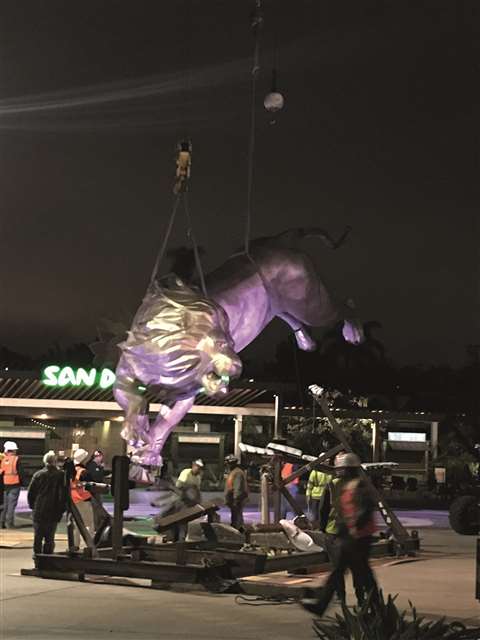 With less than 12 hours to assemble the cranes, complete the lift and then evacuate the cranes, the team faced a huge time crunch. The entire project was completed overnight.

“The biggest challenge was the fact that it didn’t have engineered pick points on it,” added Meyer. “The shape of it could have things that would lend to having the rigging slip on it. At the same time, we had to make sure we had rigging that wouldn’t damage the bronze sculpture.”

In addition to the statue’s unique size and delicate composition, Marco Crane was working against the clock as the San Diego Zoo is open 365 days a year. With less than 12 hours to assemble the cranes, complete the lift and then evacuate the cranes, the team faced a huge time crunch. The entire project was completed overnight, with the actual lift taking close to four hours.

“We had to wait until it closed at 6 p.m. and all the people cleared out before we could start setting up,” said Meyer. “The zoo opens back up at 9 a.m. in the morning, so we had to be done and out of there by the next morning to be ready to go.”

A third crane was also involved in the project. A 65-ton Link-Belt RTC 8065 was onsite to perform accessory lifts, which included holding onto a Kabuki curtain assembly. The lion was to stay shrouded by the curtain until the big reveal of the statue at an evening social event.

“When you look at it from an engineering standpoint, he’s got one touch point and it’s not straight center,” said Rick Schwartz, San Diego Zoo global ambassador. “So, this is over 20,000 pounds of a statue on that one touch point. It’s not only magnificent to look at but think about how they built that.”