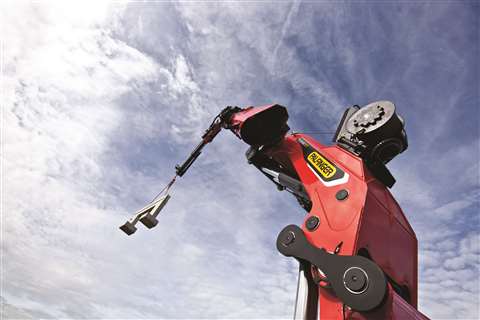 As a Midwest girl spending her first year in a city of four million, it never ceases to amaze me just how often a height-defying skyscraper pops up on the Chicago skyline. Construction is a constant in Chicago and in small and large cities across the nation. A crane that is getting a lot of attention on many of these job sites dominates in capabilities, innovation and adaptation. Cue the articulating crane.

Articulating cranes – sometimes known as knuckle boom or loader cranes – are much more accepted today than they have been in the past, especially in the crane rental market, according to Bernie Faloney, CEO and president of Fascan International. Fascan sells articulating cranes built by the Italian manufacturer Fassi.

“This kind of crane was initially designed for a single use, to handle wallboard,” he said. “Today, they can be used in multiple applications such as general construction, roofing, cement work, re-bar handling, steel works, railroad construction and repair, marine applications, the oil and gas markets and many more.”

In congested metropolitan areas such as New York City, you can get better accessibility with an articulated crane, as well as a bigger economic return than working with mobile or tower cranes, Faloney continued. These types of cranes can operate at 360 degrees without counterweights, and can set up and tear down quickly with comparatively few feet of overhead height. While articulating cranes continue to increase in popularity, new applications and industries are developing, and mature markets continue to grow.

“We continue to see traditional stiff boom (telescopic) crane users converting to articulating cranes,” said Greg Sneek, product manager at Palfinger. “This is attributed to users who become aware of inherent advantages of articulated boom cranes such as ease of operation, increased payloads, fuel savings and working in confined spaces. In addition, articulated cranes have increased in reach and capacity to bridge the gap between the different types of cranes.”

Samuel Rooke, PM business unit manager for North America at Manitex International, believes that the market for articulating cranes will continue to grow.  The articulating market hasn’t been affected as much as the downturn seen in the telescopic or stick boom market over the past couple of years, Rooke said.

“Every year, new industries discover ways to use cranes to address lifting or moving challenges, like railroad repair, but from what I’ve seen, articulating cranes are still used primarily in the industries you might expect – construction (building materials delivery and deployment), oil and gas infrastructure, utilities and military,” said Faloney.

At Fascan, the models that are in the highest demand are those with lifting capacities between 33 and 45 ton meters, which can be used in a number of applications, like roofing and building materials, handling and transport, precast placement and trench plate work.

Fassi cranes use a system called Jib Dual Power (JDP) on its longer boom cranes (7 to 8 sections). JDP restricts the length to which the individual sections can extend so that the full lift capacity of the jib isn’t compromised.

Manitex International’s PM brand articulating cranes also utilize a power link system that optimizes the geometry of the crane, the boom and the cylinder by adding a “dog-bone” hinge point which allows the crane to maximize the verticalization of the load.
The dual power is important because it means the load chart remains constant.

“If you are picking a load, you have the capability to do so vertically without having to retract your boom in order to maintain capacity,” Rooke explained.
The concrete sector is also where articulating cranes are being utilized.

“There’s a lot of articulating crane growth in the concrete business and that’s sort of a mid-range,” Rooke said, “from a 30-ton meter to a 100-ton meter crane. In the high capacity and high reach cranes, we’ve seen a lot of growth there. Especially in New York City and some of the big metropolitan areas across the U.S. So, that would be the 65-ton meter through 210-meter ton cranes that we offer at PM.”

ConExpo played an important role for articulating crane manufacturers, allowing them to introduce many new products to new and old customers. The Manitex booth was bustling with interest. At the same booth, traditional boom truck customers could also see the attributes of the PM articulating cranes.

“It was nice to see a lot of interest in our PM 210 high reach crane,” said Rooke. “It’s one of the largest cranes on the smallest platforms in the market. We had a ton of success around that crane and a lot of activity and interest.”

The PM 210 is equipped with a jib specifically designed to allow reach over 147 feet horizontally and 164 feet vertically.
Designed for carrier vehicles with a maximum permissible gross vehicle weight of 70,547 pounds, the Palfinger PK 165.002 TEC 7 combines strength and reach.

“For the North American market, the new PK 165.002 TEC 7 offers tremendous advantages and industry leading technologies,” explained Sneek. “The new model allows for its installation on Class 8 chassis, and when fully equipped with fly-jib and winch, has a total weight of less than 80,000 pounds. This weight savings reduces the need for special permits to transport the truck throughout areas in North America.”