Like many states in the northeast, the Massachusetts Department of Transportation (MassDOT) is faced with an aging highway infrastructure. In particular, the 1965 vintage Commonwealth Avenue Bridge over the Massachusetts Turnpike (I-90) was in poor condition, necessitating replacement of the deck and steel bridge beams. MassDOT developed a construction plan to replace the existing superstructure that carries Commonwealth Avenue and the MBTA Green Line B branch over I-90 and the MBTA Commuter Rail line just west of downtown Boston. 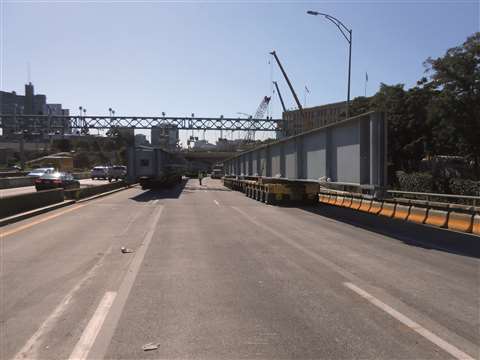 Built in 1965, the Commonwealth Avenue Bridge was repaired using Accelerated Bridge Construction. The deck and steel bridge beams were replaced during a three-week shutdown that required ‘round the clock work.

Maxim’s scope of work included a receipt of each major bridge girder assembly from the hook of a 300-ton capacity Manitowoc 2250 crawler crane and hauling them over public roads, including the I-90 viaduct, to the project site. Maxim used its Goldhofer SPMTs to haul the girder assemblies.

The largest girder assemblies were 160 feet long weighing 181,000 pounds. Each girder assembly was offloaded from Maxim’s Goldhofer SPMTs and set to the modified bridge piers utilizing one of Maxim’s 400-ton Manitowoc Manitowc 16000 crawler cranes positioned in the eastbound lane of I-90.

The sequence of events included the heavy haul of multiple bridge girder assemblies using three Goldhofer SPMTs in a 12-line decked configuration with crews working around-the-clock over the first week of the construction shutdown. Once the demolition of the existing bridge elements was complete and the piers and abutments were ready, the hauling work for Maxim was underway.

By the end of the week, the Maxim Heavy Haul team had safely and efficiently completed the hauling and rigging scope, rough setting 18 bridge girder assemblies, completing this transport phase of the project in lock-step with the general contractor’s schedule for all of the component deliveries. 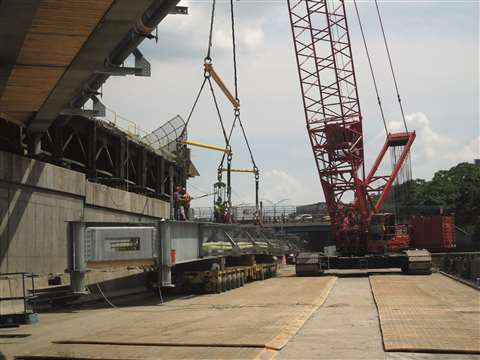 Each girder assembly was offloaded from Maxim’s Goldhofer SPMTs and set to the modified bridge piers using one of Maxim’s Manitowoc 16000 crawler cranes that was positioned in the eastbound lane of I-90.

“On behalf of the Maxim Heavy Haul Division, I would like to thank the entire team at Walsh Construction and MassDOT for their tremendous support on this project,” said Allen Wenturine, Maxim Crane’s Heavy Haul operations manager. “Without their hard work and coordination, we would not have been able to execute our scope of work effectively.”