Mega cranes have been front and center in the news over the past year.

Super heavy lift cranes are making headlines around the world.

There are a handful of other mega cranes around the world, including the Manitowoc 31000 that has been building sports stadiums over the past decade and Liebherr’s 3,300-ton capacity LTR 13000 that work on projects around the globe.

Mammoet’s Focus30 has completed testing and is being sent to its first project in the U.K. According to Mammoet, the Focus30 will enhance construction projects in oil refineries and cities where lifts are surrounded by live plant buildings and people. Its low ground-bearing pressure helps to protect underground infrastructure and reduce stabilization issues. 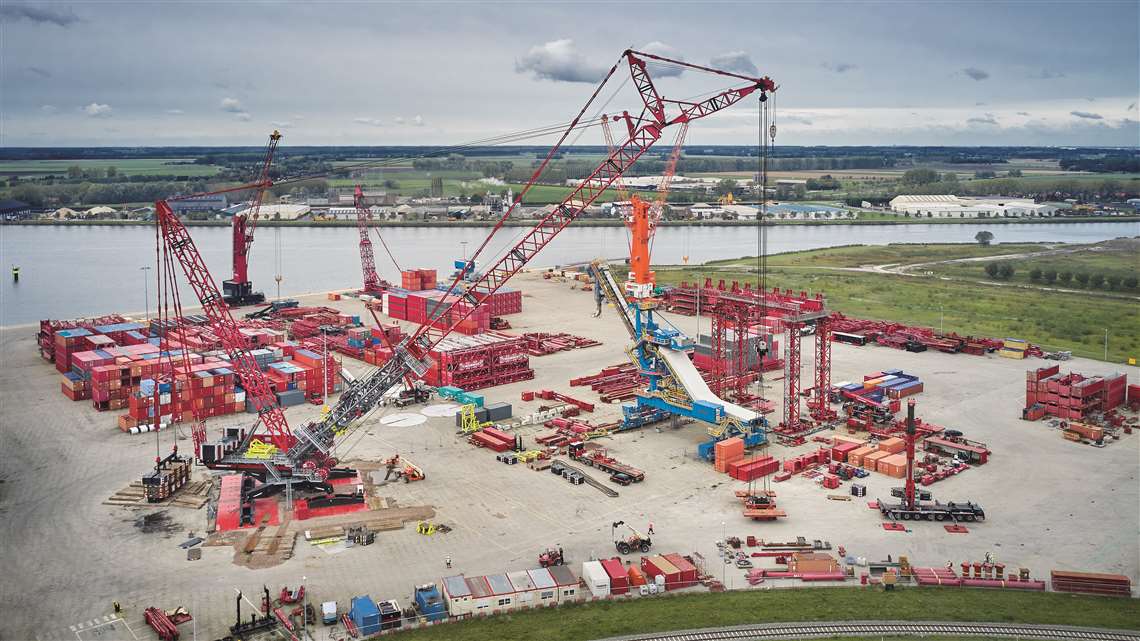 Mammoet’s crane for confined spaces, the Focus30, has completed all required testing and is now being disassembled, ready for mobilization to its first project. Over the last few weeks, the crane undertook a series of controlled tests to certify its strength and safety.

Testing of the Focus30 took place in two phases, under the watchful eye of Lloyd’s Register, an independent third-party surveyor. The crane was assembled and tested in both its SFSL fixed jib configuration and SSL configuration, and subjected to 125 percent of maximum recommended load. The crane is fully compliant with the EN 13000 standard and with F.E.M. 5.004, which governs the design of steel structures of general use.

In the ring crane category, Mammoet has the PT, PTC and SK fleet.

“These cranes have all been designed and built in-house by Mammoet,” he said.

“While the PTC 35DS has the advantage of being fully containerized, the PT50 does offer a larger load moment capacity,” he said. “The larger, next generation PTCs are in the 5,000-ton capacity range. There are three of these models which can be rigged in 140, 150, 200 and 210 configurations depending on the ring kit and boom type used. The 140 and 150 setups use the smaller ring, while the 200 and 210 setup uses the larger ring. The 150 and 210 configurations use a stronger boom type which increases the load moment capacity by 10,000-tonne meters.”

“The 350,000-tonne meter load moment of the larger configuration (SK) makes it the strongest land-based crane in the world,” he said.

Mammoet’s Sliding Gantry (MSG) offers an 80,000-tonne meter load moment and 3,600 tons of lifting capacity. It is built on a ring and is fully containerized.

Mammoet’s fleet of super heavy lift cranes are working on projects in North America, Europe and Asia Pacific. The PTC200 and PTC35 are both working on the Gulf Coast in the U.S..

Mammoet’s mega cranes were initially designed to serve the petrochemical and nuclear power segments to lift and install large and heavy process vessels such as reactors. As other industry segments also started to adopt modularized construction techniques, market capacity in this class of cranes have been employed in offshore yards for both conventional and renewable energy projects, Bohne said.

“In these environments we see large, preassembled modules being lifted as part of topside integrations and more recently for jacket foundation lifts,” he said.

Long lead times, engineering capabilities and costs are a barrier into this market.

“As a result, the number of mega cranes available on the market remains relatively low when compared to the 2,000-ton capacity class and below,” Bohne said. “After a number of years where demand has been relatively flat, the market for mega cranes is now heating up and this is primarily driven by demand in the renewable and petrochemical markets.”

Bohne is also excited about the prospects for the Focus30.

“The Focus30 is revolutionary in the sense that it self-builds vertically and as such becomes the perfect mega crane for lifting in confined spaces such as mature industrial plants and urban environments where available construction space is at a premium,” he said. “We see this as the perfect crane to support large scale offshore projects. This machine will provide our customers with unparalleled lifting capacity.”

Deep South Crane & Rigging’s new, powerful 3,000-ton VersaCrane TC-36000 Series 2 is one of the largest pedestal cranes in the world. The Series 2 configuration utilizes a ring system for the auxiliary counterweight movement, keeping the ground bearing pressures suitable for most project sites. Counterweight is positioned at a 95-foot radius in the Series 2 configuration. Optional counterweight radius can be configured as Series 1 depending on project needs. The maximum main boom is 470 feet. Additional jib can be added to increase tip height and offset. Configured for maximum lifting capacity, the TC-36000/S2 utilizes 6,000 kips of auxiliary counterweight. 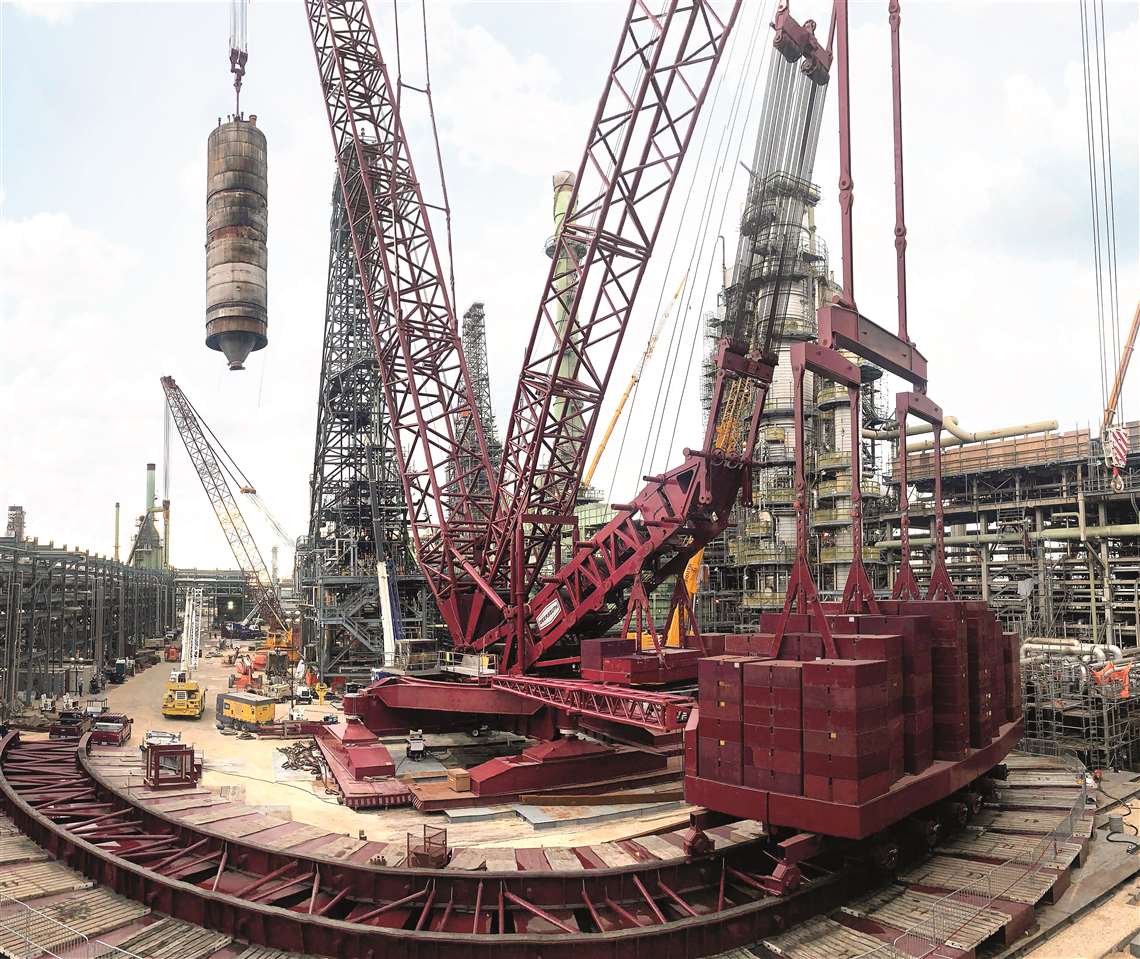 “Our intricate knowledge of these cranes allows us to make job-specific crane modifications based on the needs of the job,” Landry said. “This allows Deep South to reduce tail swing radii or create new configurations based on the specific needs of your job site.

“All VersaCrane components are engineered and manufactured at our Baton Rouge, Louisiana facility by a team of certified engineers and experienced craftsman,” said Landry.

“Our mega cranes are known for heavy lifting in confined spaces while maintaining industry-leading ground bearing pressures of 2,500 PSF or lower (depending on site conditions) while maintaining high capacities,” said Landry. “This is particularly important to mitigate underground obstacles and low ground capacity, such as that in coastal areas, often without the need for pilings.”

The VersaCrane is designed to be erected with a small footprint. The largest mega crane’s ring system uses its own drive motors to slew during operation. The track for the ring does not have to be a complete circle for the crane to perform. It only needs enough track for the intended swing radius.

“The wire rope size has been increased, which gives us better line pull capacity, and the winches were upgraded to accommodate bigger rope and line pull capacity,” said Landry. “The first 250 feet of boom were strengthened. Because of the increased size, the boom was created with a pin system so it can be transported over the road and within DOT regulations. This allowed us to increase the strength of the crane while allowing it to travel as the Series 1 does, all the while, we are still able to meet low ground bearing requirements and maintain a small footprint.”

The crane’s first job was a two-part coker change-out. There were two back-to-back turnarounds in which the crane was completely relocated in between the two phases. The crane picked 1,600,000 pounds at a 260-foot radius. This lift was performed while maintaining a ground bearing pressure under 2,000 PSF (even for the counterweight system). No piling or elaborate foundation was needed.

This crane has been tested to meet all ASME and ANSI standards, Landry said. A third-party company documented the tests and certified that the tests were performed to the correct standards.

“For now, this model is our biggest,” said Landry. “Our engineering team continues to evaluate ways to better serve our customer base, including continuing to evaluate improvements to our VersaCrane fleet. At this time, the overall crane market is uncertain due to the pandemic’s effect on the economy, and this has affected the mega crane market as well.” 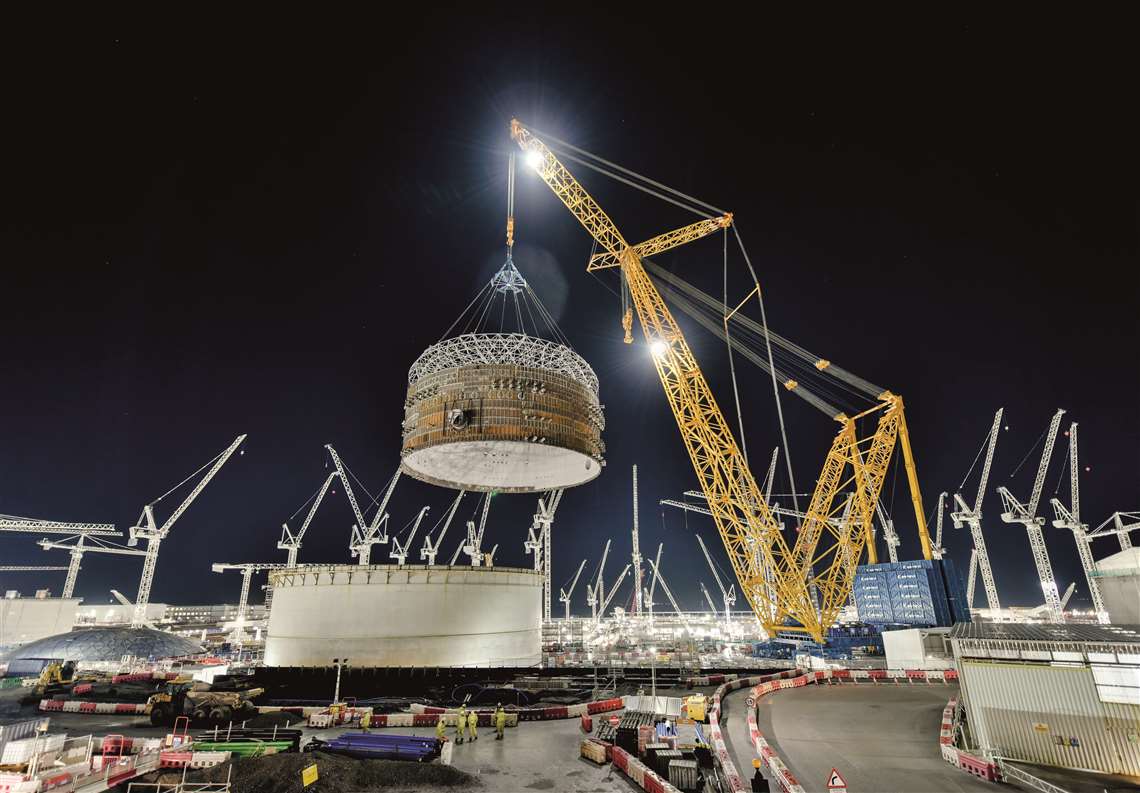 Nicknamed “Little Celeste,” the new giant is fully assembled and has been undergoing testing at the port in Ghent, Belgium. It can have a load up to 1,650 metric tons on the hook.

Target applications include jobs in nuclear, logistics, construction and offshore wind. It is already booked in for its first project to start at the beginning of 2021, Sarens said.

A key feature of the crane, differentiating it from others of its size and type, is that it is all powered electrically and carries no hydraulics. Adding to its green credentials is the ability to feed electricity back into the grid. During a lowering operation, electricity is generated by using the hoist motors as dynamos. This can then be fed back into the mains electricity network, reducing consumption by as much as 40 percent, Sarens said.

The diameter of the ring is 35 meters, and the maximum containerized counterweight is 3,000 metric tons. Main boom lengths are 100, 120 and 130 meters and jibs can be added, including a 27.5-meter runner shared with other SGC cranes. Erection or dismantling can be done in four or five weeks.

Sarens’ 5,000-metric ton capacity SGC-250 crane recently completed its biggest ever lift at Hinkley Point C nuclear power station in the U.K. The crane, known as “Big Carl,” lifted a 575 metric ton load comprising the first of three prefabricated steel rings that will form the reinforced cylinder around the nuclear reactor. The ring is 17 meters tall with a diameter of 47 meters and was lifted out of a bunker where it was constructed. The crane was working at a radius of 160 meters for the lift, which took place during the night to take advantage of lighter winds. The crane will eventually lift pieces weighing more than 1,000 metric tons on the project. 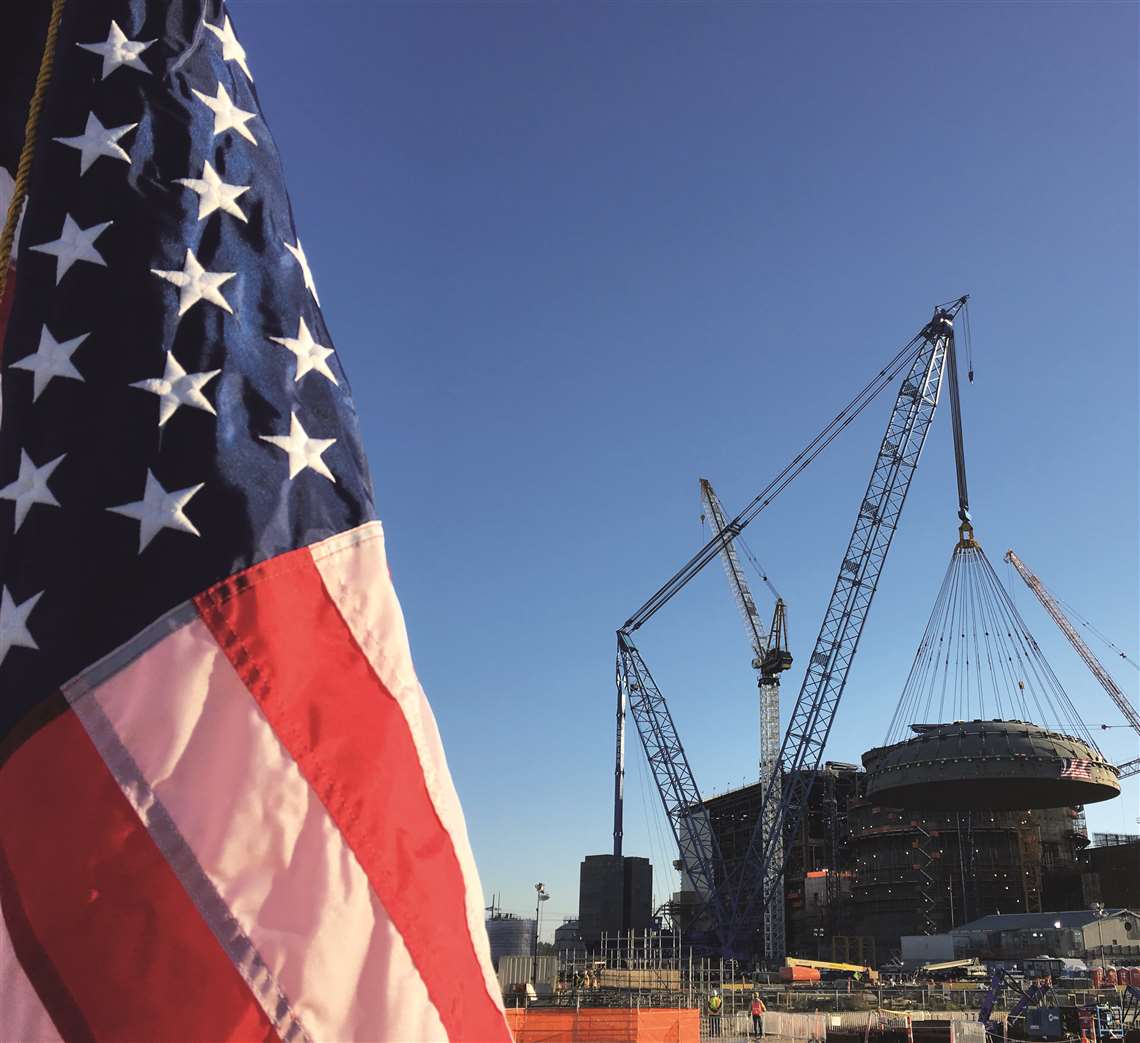 A Lampson Transi-Lift LTL-2600 lifts a containment vessel top head at a power plant in Georgia.

“This spectacular lift is a remarkable achievement in a year when everyone has had to make extraordinary efforts to keep the site and community safe from infection,” said Hinkley Point C Managing Director Stuart Crooks. “The precision involved is like watch-making on an industrial scale.”

Lampson currently has a Transi-Lift LTL-2600, rigged with 400 feet of main boom and a 20-foot jib, working at the Plant Vogtle power plant in Georgia.

“Our crane has been on site for over three years and has been used to replace steam generators, make top head lifts, place containment building rings and set conical roof modules. It will remain on site until the second quarter of 2021,” said Kate Lampson. “These cranes were designed for the building of power plants, replacing components at refineries, new stadium builds, infrastructure projects, wind tower erection, bridge work, lock replacements at dams and offshore oil platforms.

Lampson said the mega crane market is solid, but she anticipates there could be a downturn. 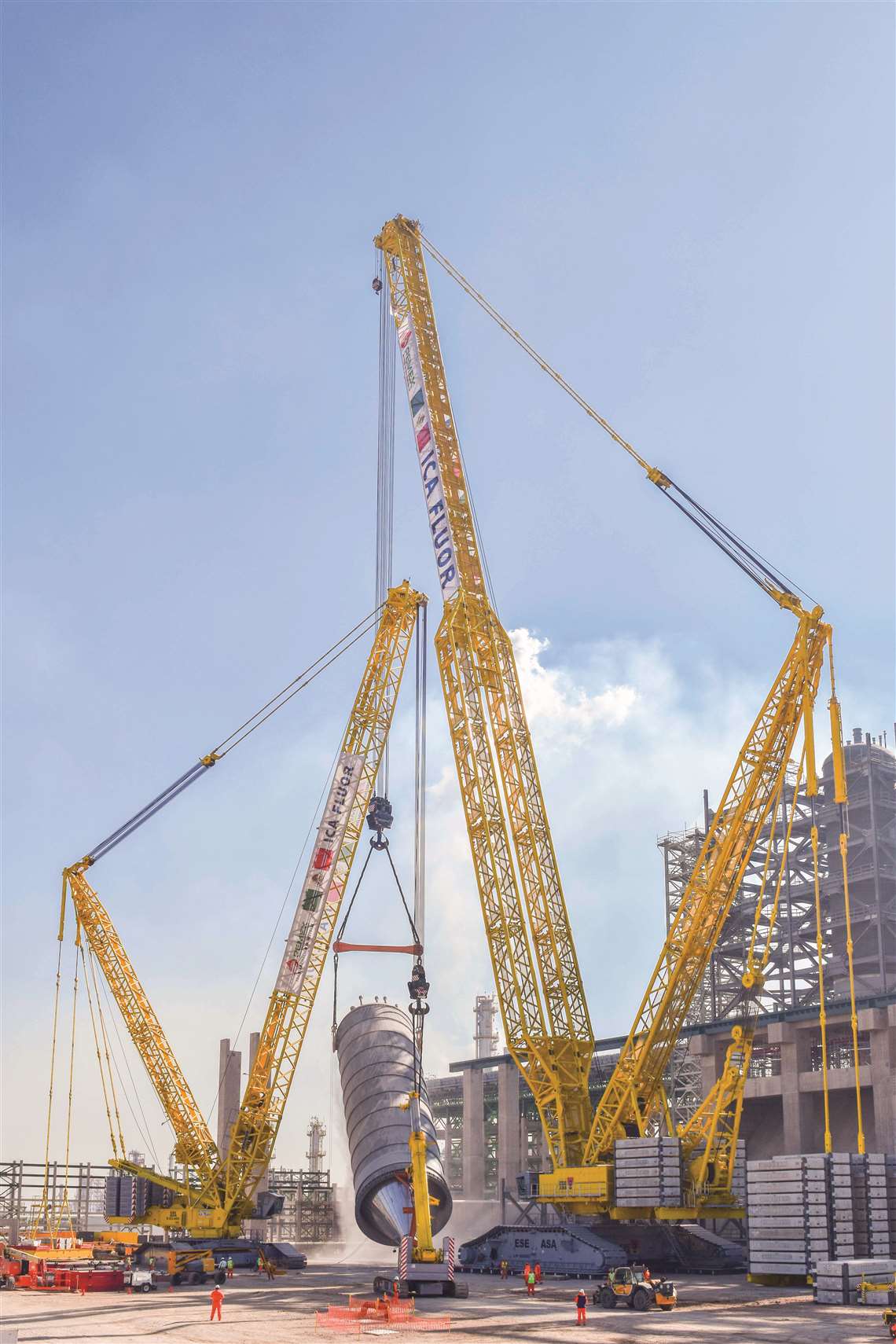 A Liebherr LTR 13000 works at the Eseasa refinery in Mexico.

Liebherr produces one crane in the super lift category, the LR 13000, with a capacity of 3,000 metric tons.

“The LR 13000 is the most powerful conventional crawler crane in the world,” said Liebherr’s Wolfgang Beringer. “One of its main areas of use is power plant construction. This requires the continuous hoisting of extreme component weights.”

With individual maximum weights of 70 metric tons, this gigantic crane can be transported at low cost throughout the world despite its size, Beringer said.

“The LR 13000 is the only crawler crane in this class which can also operate without derrick ballast,” he said. “This is made possible by a slewing ring which our engineers have developed and which we manufacture in-house, featuring an extreme lifting capacity. Even the largest product in our portfolio can increase its lifting capacities using the PowerBoom.”

“We know that two LR 13000 are working at nuclear power plants, one in Turkey and one in Asia,” said Beringer. “Others are doing different jobs, but we do not always know what our customers are using the cranes for.”