Mega-cranes: the rise of the super crane 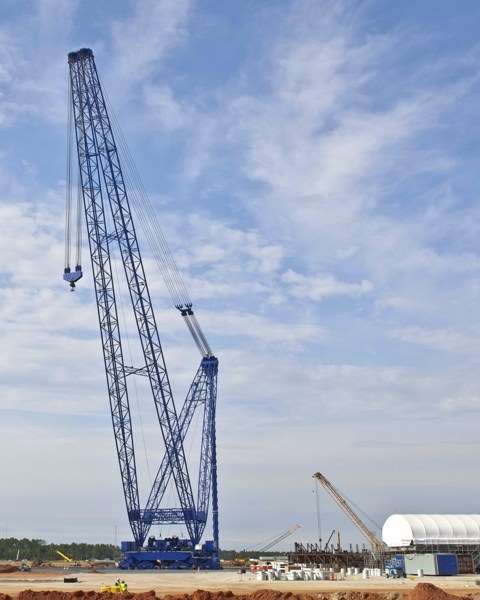 When it comes to launching a discussion about super heavy lift cranes, the old Superman intro comes to mind: Faster than a speeding bullet. More powerful than a locomotive. Able to leap tall buildings in a single bound.

Bigge Crane & Rigging has entered the super crane market in a big way with its 7,500-ton capacity AFRD.

“Bigge has developed and deployed many record-breaking heavy lift machines since the 1950s,” says Pete Ashton, vice president of major projects. “Developing engineered heavy lifting solutions for the marketplace is a core business of Bigge.”

Lampson International got in the heavy lift crane market in the 1970s when Neil Lampson saw a need for mega lift cranes, according to Kate Lampson.

“He saw a need for heavy lift cranes for nuclear power plant construction in the Pacific Northwest,” she says. “He had an intuition for what the customer needed and with a lot of hard work from his engineering team was able to design the Lampson Transi-Lift and pioneer the ‘over the top’ lifting method.”

Lampson says after several successful local jobs for Lampson, word spread and soon the company was manufacturing various models of the Transi-Lift and doing business globally. The Lampson Transi-Lift System is a patented configuration that combines the heavy lifting capacities of stiff leg derricks and ring-mounted lift equipment with the mobility of a conventional crawler crane. The largest Lampson heavy lift crane, the LTL-3000, has a capacity to lift 3,000 tons.

Lampson says her company is building these giants for nuclear power plants in Japan and China, and they are used in power plant, manufacturing plant and stadium construction. They are also used to service offshore rigs and dams.

The demand for heavy lift cranes is surprisingly good, which may be why there are new players in the market.

“We are seeing a steady demand for our heavy lift cranes in both the United States and abroad,” says Lampson.

In 2012, Sarens International introduced the SGC-120. The crane has a lifting capacity of 3,200 metric tons at 30 meters and 1,000 tons at 80 meters. It features a ring design with a limited footprint, low ground-bearing pressures and was designed for flexible worldwide transportation in standard shipping containers, according to Marcel Roovers, global sales director.

“This crane is best suited for lifting modules, PAS, PAU and FSPOs,” he says. “It will work in chemical and power plants and nuclear plants.”

Lead times to build these super big cranes is between three to four years, Roovers says, “so you are always taking a risk because this is longer than the contract lead time. Unfortunately, planned projects do not always come to realization – the Japanese nuclear disaster put a stop to many contracts which contractors were gearing up for.”

Additionally, he says the major change seen over the last 30 years, apart from the fact that cranes and lifts have increased in capacity, is that it takes more time to plan and prepare for the lift than actually carrying out the lift.

“Today clients bring in external consultants to check the procedures and calculations, so it takes a long time before you get the green light,” he says. “Overall this is not such a bad thing, because having an independent check further improves safety.”

After finishing its inaugural job in Phoenix, AZ, Saren’s SGC-120 was being shipped to China. In Arizona, the crane worked on the construction of a production hall for the steel industry. As part of its job, the SGC-120 positioned 165 meter beams weighing 325 tons at a radius of 156 meters.

The SGC-120 will work in cooperation with the Cheviot Octabuoy project at the Cosco Shipyard in Nantong, China to build a top-side drilling platform. The SGC-120 will lift modules and other equipment weighing up to 1,300 tons, Roovers says.

Mammoet, based in The Netherlands, is world-renowned in the super heavy lifting sector with its PTC cranes.

Mammoet USA South Senior Sales Engineer Jack Tol says the new 3,500-ton capacity PTC-140 DS is at work in Ingleside, TX, near Houston. The crane is set up in an offshore yard and is used for the assembly of an offshore oil rig.

“This crane has been designed to work on any kind of heavy lift project due to its versatility,” he says. “Petrochemical projects, power projects, installation of modules onto FPSOs, etc. The small footprint, the many different boom configurations, extremely high capacity and extreme reach and high operational speed make it suitable for all kinds of lifting projects.”

Worldwide, Tol says that the heavy lift market is healthy. “We mainly receive requests for large cranes for petrochemical, power and mining related jobs worldwide,” he says. “For the U.S., the same is true.”

“We are aware of a lot of potential work but everybody seems to be holding off until the elections are over,” he says.

Due to demand, Tol says Mammoet has additional heavy lift cranes in production and new designs on the drawing board.

In July 2012, UK-based ALE announced it would build the 5,000-metric ton capacity AL.SK350. The company says it will be the world’s highest capacity land-based crane with a load moment 77 percent higher than its nearest rival. The crane will be built by adding extra structural sections to the company’s existing 4,300-metric ton AL.SK190.

The main hoist is by strand jacks and it will have a 2,000-metric ton winch for lighter loads. Its main boom will be 141.2 meters and a 120-meter jib is available. The crane is slated to go to work in mid-2013 on a long-term contract at the OSX Shipbuilding Unit in Açu, Brazil. It will install modules onto the hulls of FPSOs.

ALE’s two AL.SK190 models, launched in 2008, have seen steady work, the company said. On the Thai growth project in Thailand, the AL.SK190 completed lifts in a third of the time required by any other crane, ALE said. At the Valero plant in Port Arthur, TX, the AL.SK190 made the first lift of a complete six coke drum derrick assembly weighing approximately 1,600 metric tons.

Chinese manufacturer XCMG has begun building the 3,600-plus ton capacity XGC88000, which is targeted for work at petrochemical, coal, chemical and nuclear power construction. It was jointly developed with Chinese oil company Sinopec (China Petroleum & Chemical Corporation) following an agreement signed in 2010. The XGC88000 follows the 1,000- and 2,000-metric ton capacity models previously launched, the latter shown at the 2010 Bauma China exhibition in Shanghai.

The CC 8800-1 is ready for its first commissioning at a BP Cracker in Western Australia.

Rob West, Tutt Bryant Heavy Lift and Shift general manager, told sister magazine International Cranes and Specialized Transport, “We are very pleased to be in possession of Australia’s first 1,600-ton crawler crane. The arrival of the CC 8800-1 marks a new milestone for the Tutt Bryant Group and we look forward to providing more efficient and flexible solutions for our client’s heavy lift and shift projects.”

The first unit of the new 2,535-ton capacity Manitowoc Model 31000 crawler crane is expected to be delivered in 2012, as soon as testing is completed. In addition to the crane’s Variable Position Counterweight, the boom and jib combinations are the longest ever designed for Manitowoc crawler cranes, the company said.

Mike Wood, senior product manager, said with a crane the size of the Model 31000, maximizing flexibility and versatility were major design priorities.

“We have designed the 31000 to be as adaptable as possible,” Wood said. “The crane is available with multiple boom and jib configurations, as well as five counterweight configurations.”

The 31000 comes standard with a 180-foot heavy-lift main boom, but using optional 16-foot and 33-foot inserts, the main boom can be extended to a total length of 361 feet.

Optional boom configurations can also increase the crane’s reach and lift height. The first attachment is a fixed jib with a basic rating of 1,543 tons and a basic configuration of 79 feet. Using optional inserts, users can extend the fixed jib to 138 feet.

The 31000 also has a combination boom, which combines parts of the main boom and the luffing jib. With various inserts, the combination boom has a total maximum length of 453 feet.

Mammoet has ordered the first 3,000-metric-ton capacity Liebherr LR 13000 lattice boom crawler crane, which is now being erected at its first job, a refinery extension project in Whiting, IN, near Chicago. The crane will be rigged with 78 meters of main boom and a 72-meter luffer and derrick attachment.

Typical applications will be power station construction and in the petrochemical sector. Advantages of the LR 13000 include its ability to travel under full load and the wide range of boom systems, from light to super-heavy with the new P-boom, Liebherr said.

The heavy lift crane market appears to be crowded, although the market for these cranes is extremely specialized.