After 22 years, seeing a Favelle Favco tower crane working on a project still gives Michael Khoo a sense of pride.

Favelle Favco produces a tower crane product line that has built many of the most prominent structures around the globe, including the world’s tallest building, the Burj Khalifa. The World Trade Center in New York City was constructed using several Favelle Favco M760D tower cranes. The cranes were famously called ‘kangaroo cranes,’ because of their Australian heritage.

“This is a testament of the capabilities of Favco cranes,” said Michael Khoo, general manager, Favelle Favco. “Most people may not be aware that Favco tower cranes are used in the construction of the majority of the tallest buildings in the world as well as prominent power plants and bridges.”

For some 22 years, Khoo has been the face of Favelle Favco cranes in the United States. He got his start in the industry as an engineer after graduating in 1985 with a Civil Engineering degree from Monash University. He worked as a civil engineer for a small construction company in Malaysia for two years and then returned to Australia in 1988, working with an engineering consultant company in Melbourne for four years. In 1992, he returned to Malaysia and started working as a construction site engineer with Muhibbah Engineering. He was deployed to work in various manufacturing divisions within the organization. One of those divisions was Favelle Favco.

In 1997, Favelle Favco Cranes USA was established in Texas. In 1999, there was a management restructuring and Khoo was recruited to serve as assistant general manager of the Texas operation. He left his position with Muhibbah Engineering to assume the new position in Texas.

Khoo has been with one company for more than half his career, and he termed it an “exciting journey.”

“Twenty-two years ago, when I started, tower cranes were not as widely used in U.S. construction as they are now,” he said. “Most jobs were done with crawlers or large mobile cranes. It took me a long time to convince the skeptics that a tower crane, with its small footprint and the ability to be positioned close to a structure being built, is a more efficient and safer method of construction. In many instances, a tower crane can be more productive as compared to mobile cranes, especially when high rise construction is involved.”

Khoo said the late James Lomma of New York Cranes was a big supporter of Favco cranes and was instrumental in the company’s success in the U.S. TES Inc., one of the Lomma Group of companies, has been the sole distributor of Favco cranes in U.S. since 2002.

Michael Khoo is one of the most respected individuals in the tower crane industry. His quiet demeanor gives way to easy and lasting friendships. I caught up with him recently and he had a lot of interesting things to say.

What is the evolution of the Favelle Favco/Kroll product line?

When the oil industry was booming in the 1990s and 2000s, Favelle Favco produced more offshore cranes than tower cranes. Today, Favco offshore cranes are used in all corners of the world, from the North Sea to the Gulf of Mexico. The company’s product line also includes wharf cranes. Favco also has a range of heavy lift cranes for offshore wind turbine installation. In the early 2000s, Favelle Favco was involved in the manufacturing of crawler cranes in the U.S. Since 2008, crawler crane production was halted and the focus has been primarily on tower and offshore cranes.

Kroll, a crane company headquartered in Denmark, was acquired by Favco in 1997 to ensure that Favco has a global presence and to expand the types of cranes the company can offer. The Kroll crane range includes both electric hammerheads and luffing tower cranes. Kroll also has a range of specialized luffing cranes for land-based wind turbine installation.

How do you characterize the current market?

Since the pandemic started in 2020, the market for our cranes has been challenging. In particular, the demand for offshore cranes has significantly declined. While we see a small uptick in demand in 2021, it will still be a challenging environment as other factors come into the picture such as the dramatic increase in commodities prices such as steel. This has a dampening effect on the demand for new cranes. Nevertheless, as the pandemic situation improves, and coupled with the recovery of the North American economy, we are cautiously optimistic the demand for new cranes will return by 2022.

What is the scope of the Favelle Favco facility In Texas?

We have a 19-acre facility in Harlingen, TX. In the early years we did a lot of production work but since then most of the production work is being done in our facilities in Malaysia and Australia due to economies of scale. Our Harlingen facility is currently utilized to produce electronic crane control systems besides serving as a sales and spare parts center for our regional tower and offshore cranes.

The Kroll 10,000 hammerhead crane is no longer in production. It was originally meant for use in nuclear plant construction. The first Kroll K10,000 was produced in 1978 and 15 were produced. There are eight units of K10,000 still in use in shipyards around the world today.

Twelve M2480 tower cranes have been produced by Favco. With a maximum lift capacity of 330 metric tons, the M2480D is undoubtedly the largest luffing tower crane in the world. The first unit was delivered in 2008 to an Australian company. They have built nuclear plants, bridges and LNG facilities, to name a few projects.

Electric cranes are not new for Favelle Favco. Since the 1997 acquisition of Kroll, which manufactures electric cranes, Favelle Favco has been producing electric tower cranes. However, our U.S. customers are more inclined towards the diesel hydraulic version due to the unavailability or difficulty of getting grid power. While generators can be used, they can be cumbersome and consume a lot more fuel. The first electric luffer, the MK440, was sold in U.S. in 2018. Today, Favelle Favco’s range includes diesel hydraulic, electric or electro-hydraulic versions.

What is it that you like about working in the tower crane industry?

I like that the crane industry is constantly evolving. Lighter materials and modern crane design software can optimize the design of cranes allowing for heavier lifts. In addition, the cranes today are loaded with electronics which provide the crane the ability to self-diagnose itself should a problem arise. Data logging and remote sensing are features that are or will soon be standard requirements in cranes. There is also a lot of emphasis on safety, and the Favelle Favco cranes have safety features that will self-trigger if something goes wrong.

How has the pandemic affected your business? What were the biggest issues for your market?

The pandemic has affected a lot of industries and the crane industry is no exception. When it started, many jobsites were shut down and projects were put on hold or cancelled. Favco tower cranes are predominantly used in high rise construction and the pandemic has resulted in a lot of vacant offices as many workers are working from home. If fewer buildings are being built due to lack of demand for office spaces, there will be less requirements for cranes.

What are the biggest challenges you face in your business post pandemic?

We see construction activities picking up, especially in the New York area. That is a good sign. However, prices for commodities like steel have increased significantly. This has the potential to dampen any resurgence in construction. There is a lot of disruption to shipping, and shipping rates have increased dramatically since the start of 2021.

What is your best business advice?

You need to have a close working relationship with your customers. Not only with the crane owner, but also the field personnel. These are the people who can help you improve your product. One key advantage Favelle Favco has is the ability to do a lot of customization to suit what our customer wants.

I fish and golf occasionally, not that I am particularly good at either.

Favelle Favco was founded as Favelle Mort in Australia in the early 1960s by Eric Favelle. 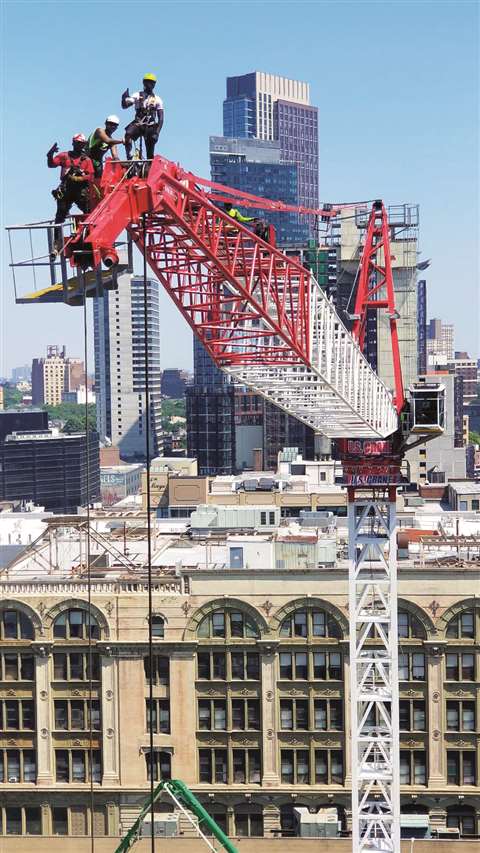 By the late 1960s, the company was involved in one of the most prestigious projects in United States – the World Trade Center. For that project, Favelle Mort showcased eight Australian-built STD2700 diesel-powered luffing tower cranes. The cranes captured enormous media attention working on such a high visibility project.

Between the 1970s and 1980s, recession hit the North American economy and the company had several changes of ownership. Eventually Favelle Mort entered into a licensing agreement with FMC Link-Belt to manufacture luffing tower cranes for the North American market. FMC Link-Belt eventually decided to stop producing luffing cranes in 1982 due to depressed demand. In 1989, Favelle Favco Cranes Pty Ltd was established in Preston, New South Wales, Australia based on the same design principal as the original company.

Muhibbah Engineering of Malaysia subsequently acquired Favelle Favco Cranes in 1995 and continues to be the owner today.