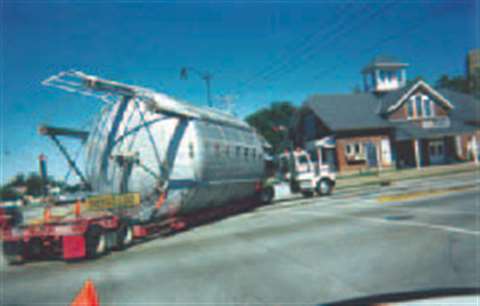 Jim White, president of White Brothers Trucking, is among the most respected indivuals in the transport industry. And it's no wonder. White's depth of experience in the industry combines with his thoughtful nature to make him an ideal statesman for SC & RA and the entire transport industry.

Fittingly, White and his company reach two particularly significant milestones at this year's SC & RA Annual Conference at Hilton Head Island, S.C. During closing night ceremonies, the company will receive the 50 Year Longevity Award in recognition and appreciation of loyal membership. At the same time, White will complete his term as SC & RA chairman. He has previously served as the association's president, vice president and assistant treasurer.

White remembers that as a teen-ager he attended his first annual meeting of the Heavy Specialized Carriers Conference, the forerunner of SC & RA. Later, at SC & RA meetings, he found himself wanting to become involved in the association. But there never seemed to be enough time. Finally, the time came for him to get invovled.

“This has been a great organization to get involved with,” he says. “The staff has grown so much stronger in the past five years, and the members are getting more involved in more committees. Our Allied Industries members are just wonderful when it comes to supporting the association. I know of a lot of organizations where you just pay your dues to say you're a member. SC & RA is not one of them.”

For the Whites, SC & RA has become a family commitment. His wife Ginger White has been an active member of SC & RA, serving as president of the Ladies Group. Strengthening the family connection even more is son Tom, who serves as safety director and participates at major SC & RA meetings.

During his term in office, White says SC & RA has made considerable strides involving issues such as insurance and oversize/overweight permit uniformity at the state and regional levels. In the area of permit uniformity, White points with pride to the recent change in California, making rules regarding tridem axles consistent with most other states. “That will save our members a lot of time and money,” he says. “I never thought I'd see it in my lifetime.”

Much work remains to be accomplished concerning permitting, particularly at the local level, White says. “Municipalities see permits as a cash cow,” he says. “We're seeing multiple permits, rules and procedures for running through areas like Chicago. The permits can be very expensive and the fines are huge. A lot of times, it's hard just to figure out who issues the permits.”

White is proud of the scope of work that the SC & RA achieves. He praises the risk management programs of Special Risk Services Group (SRS), the association's endorsed provider of property and casualty insurance. “They do more than preach about safety,” he says. “They actually help companies attain it.”

He also expresses enthusiasm about health, dental, life and disability lines being developed for members and their employees.

Even though White plans to step away from day-to-day leadership of the association, expect to see him at future SC & RA meetings.

“For me, one of the best things about SC & RA has been the friendships I've had with so many members,” he says. “We always look forward to seeing them. We've gone on vacations with some of them, and we've helped each other out in business.”