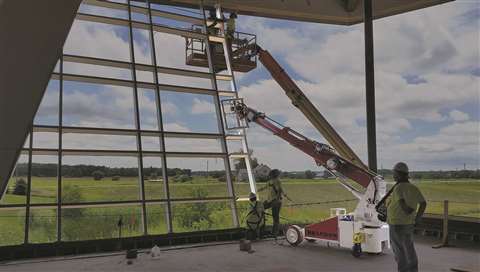 Bailey’ team engineered a distinctive clamping grip that worked in concert with Bailey’s robot attachment, which could grab the mullion without damaging it.

Mini cranes are small but they perform monumental tasks in small spaces. Following are a few big jobs performed by these small but mighty cranes.

Last summer, Bailey Specialty Cranes & Aerials was tasked with helping a local window contractor install mullion framing at Johnsonville Sausage headquarters. The mullions were unique in that they were over 20 feet long and had to be installed at a 20 degree angle. This eliminated the use of a standard crane because the ceiling had already been installed. Moreover, there was nothing on the market that could grab the mullion without damaging it.

Bailey’ team engineered a distinctive clamping grip that worked in concert with Bailey’s robot attachment, which could grab the mullion without damaging it. It could also lift the 600-pound mullion.

“Our pick and carry mini crane eliminated the process of any physical lifting,” said Jeff Bailey, owner. “This reduced the chances of sprains and strains and increased contractor safety.” 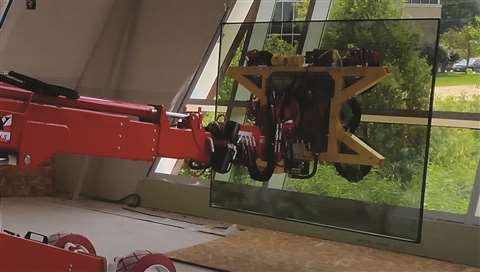 The Bailey Brandon 6 mini crane has a capacity of 3 tons.

On completion of the mullion installation, the contractor swapped out the robot attachment to Bailey’s glass lifter attachment to install the glass panels. This process took approximately 10 minutes. The mini crane performed both functions.

“The project went seamless and the sentiment echoed from the workers was they could not have installed the mullions without the Brandon 6 mini crane,” said Bailey.

Back in August, a team of crane experts used a Jekko SPX 527 mini crane to replace a bronze statue of Benjamin Franklin back onto its pedestal in the heart of historic Boston, MA.

The 8-foot statue had been knocked to the ground several months earlier when 40 mile per hour winds launched a large tent into the statue, pulling it from its 10-foot concrete pedestal where it had been standing since 1856.

The Franklin statue, which weighs nearly a ton, is part of the city’s pedestrian-popular Freedom Trail, and stands amidst large, old trees and historic buildings. The restoration equipment had to be precise in its movements as well as strong. The restoration team was able to replace the statue of Franklin without affecting any of its surroundings.

The SPX 527 has a maximum capacity to lift 5,955 pounds, a maximum horizontal reach of 36 feet 8 inches and a maximum vertical reach of 60 feet. 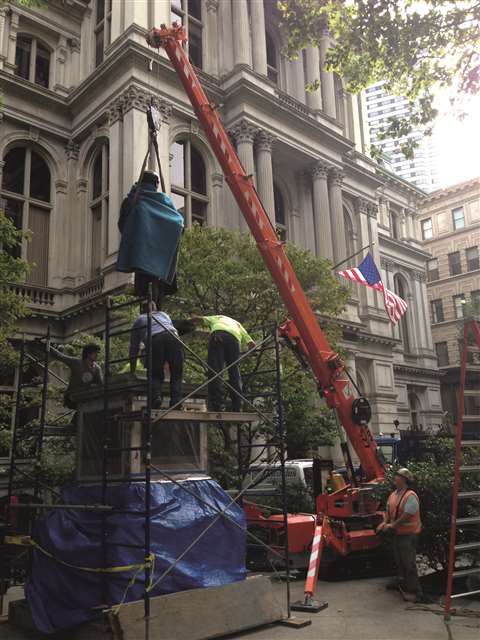 A Jekko SPX 527 mini crane set a bronze statue of Benjamin Franklin back onto its pedestal in Boston.

A Maeda MC285 owned and on rental from by Bigge Crane and Rigging is being utilized for a project to repair a portion of the Oakland Bay Bridge.

The job site was located on the underside of the westbound off-ramp of the Bay Bridge approaching Yerba Buena Island (on the Oakland side) 160 feet off the ground.

Bigge’s MC285 was able to operate in an extremely confined space, lifting and setting steel panels that are then welded into place.

Working from the high platform and positioned underneath the bridge, the MC285 was the perfect machine for performing hoisting duty in this unique work site.

The overall weight of the MC285 of 4,325 pounds meant that it could work easily on the platform, when other heavier equipment, such as a carry deck crane, could not.

Full compliance with Cal/OSHA and Maeda’s OEM safety features where also a consideration when selecting a Maeda mini crane for this project. 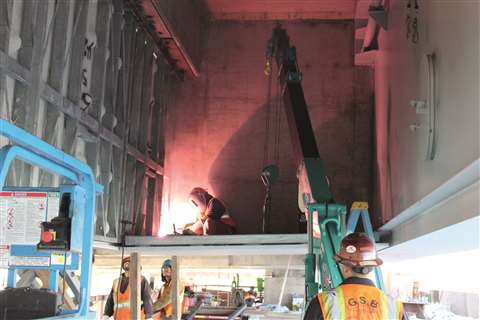 After lifting the panels the Maeda mini crane set them into place for welding.

The Maeda MC285 has a maximum lift height of 31 feet 10 inches. It has a rated capacity of 6,210 pounds. Its body width is 2 feet 6 inches and the crane features 12-position spider leg style outriggers with a 360 degree swing

Faced with the challenge of moving a giant circulation fan into and through one of its plants, Pittsburgh Glass Works (PGW) recently enlisted the help of a Jekko mini crane to perform the work.

PGW used a Jekko SPD 360 to move an 810-pound, 60-inch fan and its base into its Elkin, NC plant, lift it 26 feet to the ceiling of the structure and hold it while technicians connected the fan to electricity and then anchored it to the ceiling.

The electric-powered Jekko was able to perform the work quietly, without exhaust or fumes and without leaving tread marks through the facility.

The Jekko SPD 360 has a lifting capacity of 3,968 pounds, a maximum horizontal reach of 34 feet 5 inches and a maximum vertical reach of 42 feet 8 inches.

Smart as a fox

A Maeda MC305 was selected by general contractor Garbutt Construction, and their steel subcontractor, QBT Industrial Fabrications, to performing steel erection, inside the historic Fox Theatre in Atlanta. Due to the project location on Peachtree Street in the heart of Atlanta, and the confined work site, a conventional crane, working from a blocked main street or side street was not an option.

The MC305 was traveled off of the trailer on arrival at the site in a matter of minutes. It was then placed in the gutted section of the Fox Theatre, where it erected the new support structure. Accessing and working in a tight, confined space is exactly what the Maeda mini cranes are designed to do.

With a lift height of up to 41 feet and ample capacity to handle the steel beams and other materials, the MC305 is able to work in the area and set up in very tight quarters.

Lifting is handled safely with the operator in full view of workers in aerial lifts connecting the beams. Standard Maeda OEM safety systems, such as a Moment Limiter Display, with load charts programmed in, make it easy for the operator to hoist safely and efficiently.

The Maeda MC305 has a 47-foot maximum lift height and a 51-inch body width. The crane has a capacity of 6,560 pounds, two speed functions, three position spider leg style outriggers and a 360 degree swing.